According to the reports, Man United are getting increasingly confident that they are the frontrunners in the race to sign Erling Haaland come next summer.

During the last 18 months at Borussia Dortmund, the Norwegian has been on fire with his poaching instincts in front of goal.

Haaland netted 62 goals in 62 appearances for Dortmund in the last 18 months and has piqued interest from all elite clubs on the continent, but Real Madrid and Manchester United appear to be the main contenders in the battle to sign the renowned striker.

This form and consistency certainly make him one of the best generational talents present on planet earth joining the elite company with Kylian Mbappe. He’s regarded as a future Ballon d’Or winner.

The 21-year-old was on the top of their transfer wishlist as they believe he would be a great hit at Old Trafford and would be a statement shining to show their intent to bring back the former glory.

But, veteran marksman Edinson Cavani choose to stay at United for one more year which caused the Red Devils to put their desire on hold and instead swooped for Jadon Sancho and also Solskjaer believed that it would be better if they let their rising star Mason Greenwood grow a lot more this year by giving him appropriate game time.

With Cavani’s deal expiring at the of the current season, Ole Gunnar Solskjaer is expected to bring his fellow countryman to Old Trafford. A spectacular transfer to Old Trafford might take place in a year’s time.

According to Forbes, United are highly convinced in landing Haaland, with transfer interest of these three players confirming their viewpoint.

Whenever we talk about a potential transfer move of a big player to a certain team we need to consider his contract situation, potential suitors and their activities in the market and finally players desire for the move to happen.

In this article we’re going to talk about the transfer stance of each top club linked to Haaland and the current standing in their striking department.

Chelsea was anticipated to compete with Man United for the acquisition of Haaland, with both Thomas Tuchel and Roman Abramovich big admirers of the Norwegian’s talent.

However, Dortmund’s firm stance of keeping Haaland for at least another season has dropped Chelsea’s interest who instead went big for the former Man United target-man Romelu Lukaku from Inter.

And despite Haaland’s obvious talents, it would make no sense for Chelsea to go for the striker, also Haaland won’t be interested in playing second fiddle to Lukaku.

If Man City are successful in acquiring Harry Kane from Spurs, that need for Haaland should be diminished.

It’s difficult to imagine City going for both players and Guardiola messing with the system that really worked wonders for him during his time at the Etihad.

Therefore, with City set to acquire Kane, United won’t be pleased for this season as it would decrease their chances of rivalling for the Premier League title but in the hindsight, they would be pleased if this gives them a free run to go for arguably the best striker in the world in Haaland.

It would be fair to say that Galacticos are desperate for Haaland to come to Madrid as we have seen the lack of transfer activity from Los Blancos in the past window’s they are probably holding out a blockbuster bid for Kylian Mbappe.

Real Madrid appears to be more interested in the French international than Haaland.

According to the reports in talkSport, Erling Haaland may exit Dortmund in the winter transfer window as his buyout clause is shifted up from the end of the season.

Haaland has a £64 million release clause inserted in his Dortmund contract, earlier it was believed to be activated at the end of the current campaign but going by the latest revelations the buyout clause could possibly be triggered as early as in January.

This has certainly ignited a rush in the transfer market with Man City, Real Madrid, Barcelona and Man United all vying for the 21-year-old’s signature.

He has already bagged 2 goals and 3 assists in the 2 games played this campaign.

As per Marca, The fact is that neither Raiola nor Dortmund are willing to hold discussions until September 1 when Haaland is available to be approached by outside clubs.

On Sept 1, Haaland’s buyout clause, which may be reduced to €75 million, falls into effect, as it legally allows players’ representatives to speak to other clubs in order to find a suitable destination for Haaland.

The report also states that despite the greatest attempts of super-agent Mino Raiola, Real Madrid haven’t yet shown much of an interest in Haaland which suggests they may be obsessed with Mbappe at the current moment in time.

And finally, Solskjaer is keeping tabs with his compatriot to make sure United doesn’t lose their grip on the player and it seems the pieces look to be fitting into place for a Solskjaer’s reunion with the player he managed at his stint at Molde.

Do follow our Forums to get the latest transfer news and updates. 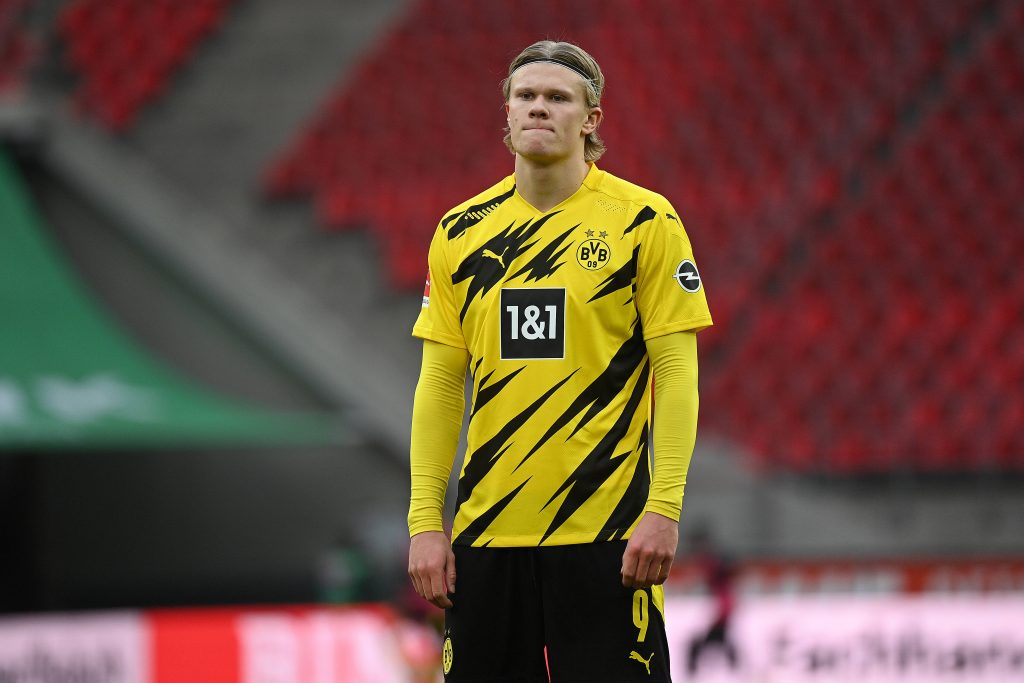