The Indian team for the upcoming World Cup in The UK has been announced. The squad is given below:

The squad is mostly along the expected lines. As with every team selection, this squad has its surprises as well. Let us look at those surprises, selections and non-selections.

After the announcement, selector MSK Prasad gave his rationale for picking Vijay Shankar. He said that Vijay’s three-dimensional ability, i.e. Batting, Bowling and fielding, is the reason for his selection. I agree with this point. But what I was surprised with, was what Prasad said after this. He said that Vijay will bat at No.4. Let us look at the role of No.4 and see how he fits there.

The top 3 of India, when in form, tend to use up majority of the 50 overs. So, Vijay is ideal to come in at around the 35th or 40th over mark and smash the bowling around. Having said this, India have a few other dashers like Pandya and Kedar, who could also be sent up the order in this situation. So, the case for Vijay is not cut and dried. But, a case does exist.

If the top 3 fails, the role of the No.4 turns into that of an anchor around whom the rest will play their innings. Vijay Shankar has not shown any ability thus far to play a long innings. He did get a chance against Australia when he made a smart-looking 40 odd in Virat’s company. But, 40 odd is not good enough. This position requires a century hitter. This is where his case becomes weak. Added to this, one has never seen him play on seaming or swinging conditions. So, the decision to pick Vijay as No.4, seems to be a gamble more than a well thought out move.

Vijay is a brilliant fielder. So his second dimension is beyond doubt.

Vijay’s third dimension, that of bowling, is also a question mark. During the Australia series, Virat seemed to want to get through his overs, some how on the sly, without much damage. Vijay did repay Virat’s faith by bowling that match winning last over vs Australia. So, credit needs to be given where it is due. Looking at the team, Vijay might be the 6th or the 7th option, which is not a bad deal.

So all in all, Vijay seems to have been picked for his batting ability, rather than his other two facets. Question marks remain on this primary aspect as well.

Why DK over Pant?

This is another point of contention. I would accept that this is a tough call for the selectors to make. Pant offers that unpredictable explosive capability that can win matches or shock the opponents to submission. On the other hand, Dinesh’s recent batting form has been no less explosive. A look at his strike rate in recent games will astonish everyone. DK is not a showman player like Pant.

Another important factor which I want to bring about is the ground fielding ability. If India’s No.4 travails continue in the world cup, DK or Pant will be played in some of the games. Considering that Dhoni will keep, barring any injuries, DK is a much better fielder and catcher than Pant. In the recent Australia series, Pant played as a batsman and was found to be a big liability on the field. So, considering the margins involved at the highest level, these things matter. So, in my analysis, Dinesh Karthik is the better choice. Michael Vaughan or Shane Warne, could express their loudest of surprises. But, India should do what suits them best. Show them the recent footages of DK’s hitting, they will shut up. IPL is not real cricket!!

Is India a seam bowler short?

Today’s cricket belongs to experts. Bits and pieces cricketers are not finding a niche in today’s game. Particularly, the bowling of such cricketers have been taken to the cleaners by today’s audacious batsmen. So, you have to be a 135 to 140 kmph plus fast bowler or a specialist spinner, to succeed today. If one applies this yard stick, India have picked only three quality seam bowlers in Bumrah, Shami and Bhuvi. This is a big weakness. These bowlers will be coming off a packed IPL summer and will play in an equally long World cup. Who is the fall back, if one of these bowlers break down. Will India play a 2 seam attack in England and expect Hardik and Vijay to cover or expect the spinners to hold the opponents. I would have expected the selectors to go with Khaleel in place of Vijay.

Rayudu must count himself unlucky for not having been picked in the squad. His difficulty in keeping up the high scoring momentum at No.4, seems to have worked against him.

England have led the World thinking these days by showing that on flat tracks, you need every batter to come in and keep playing in slog overs mode. The catch here is “flat” track. This strategy has failed England whenever there has been a bit of spice in the wicket. Champions trophy semi final, the recent ODI series in West Indies or even the capitulation against Kuldeep in Manchester ODI in 2018, have shown that this is not an all-weather strategy. English weather is fickle and one needs to be ready with Plan B and C for such fickle conditions.

In slightly testing conditions, a player like Rayudu, might be of great value in the middle order. Dinesh Karthik can play that role at No.4, if the conditions are expected to be tough for batters. However, English overhead conditions can change many times during the day and may not offer an easy decision for Virat at the start of play. One needs an all-weather man in the team always to cover for such situations. This team has none. Even DK is not very tight to offer this. Rayudu could have been that option. Sigh!

We may need to create a ‘Moneyball’ type model to help the selectors in picking the teams. At least to run scenarios to make a decision for those last few positions. I am sure with all the money that BCCI has, they will have some software helping them make these selections.

I,personally, feel that Virat takes ‘gut’ based decisions. Vijay’s selection seems to be one such. I would have gone with the extra seamer in place of Vijay. Otherwise, the team is the best we could have assembled. Rayudu question remains. But, we need to make decisions.

This team is not a balanced side and is fraught with risks. Under unlucky situations, these risks will be exposed. In 2011, India got away with such weaknesses as Yuvraj turned out to be a reliable fifth bowler. I don’t think India is a solid team to win the Cup. I won’t be surprised, if India fails to reach the semi-finals.

For details on the team, please visit Cricinfo 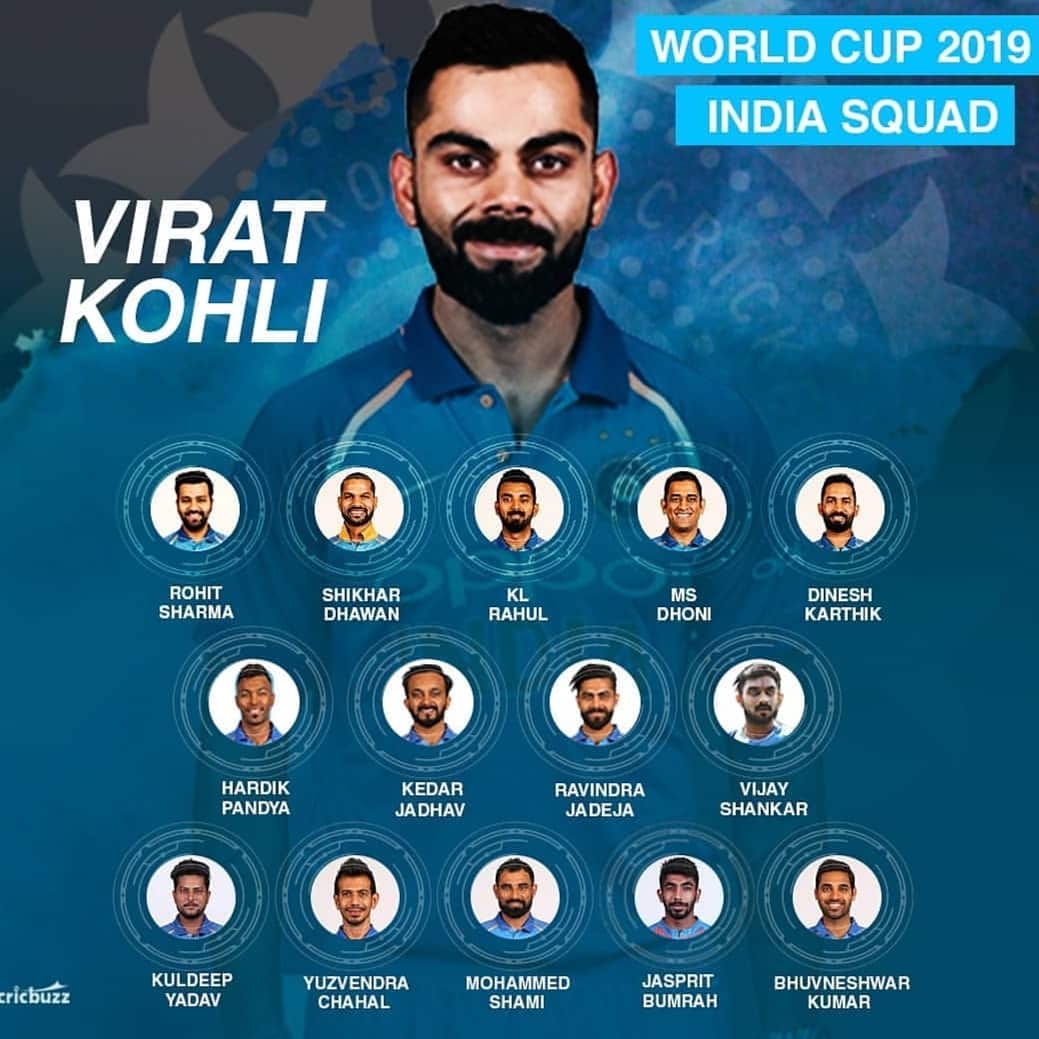