The last time Novak Djokovic cried in public he enjoyed the love even in defeat. It was gushing at Flushing (Meadows) when Daniil Medvedev won in three sets at the US Open final in September 2021. However, the loss was a morality gain because Djokovic left New York with a breakthrough of greater personal magnitude. “The crowd made me very special. They pleasantly surprised me. I did not expect anything, but the amount of support and energy and love I got from the crowd was something that I’ll remember forever”, said the beaten finalist.

Just four months later, Djokovic entered Australia to try and achieve his own Melbourne La Decima. He ended up decimated without hitting a ball in anger as Covid vaccine rules down under holed up the then world number one in an immigration hotel. The soundtrack of disgust and dismay on both sides of the argument rose to fever pitch. An elite athlete could not pass GO unless it was back to where he came from. The Serb’s monopoly of major titles was put on hold.

Never mind. The world has moved on and Australia is now opening its arms rather than turning away its multiple champion. Djokovic’s Adelaide International jaunt could not have gone any better in prep for the main event. He was pictured laughing and joking, playing football with his campmates and generally thanking everyone and everything in South Australia’s biggest city. He even did the old match point saving trick that he made a trademark against Roger Federer in the biggest Slam epics. After narrowly beating Sebastian Korda 6-7. 7-6, 6-4, the 35-year-old was ready with the platitudes: “‘The support that I’ve been getting in the past ten days is something I don’t think I’ve experienced too many times in my life.’ Save it for Rod Laver Arena, Novak.

Djoker’s Rivals Retired, Missing or Out of Form

Everything appears to be falling into place for the fourth seed while his direct rivals are either ailing in body or form. Current world number one Carlos Alcaraz has withdrawn with a right leg injury while defending champion Rafa Nadal insists he is ready for the fight despite losing six of his last seven matches on the ATP Tour.

Nine-Time Winner Back in the Melbourne Zone

If the stars are aligning far better than a Virgin Orbit satellite, the amateur psychologist in us detects a Djokovic ready to show his vulnerable side if and when he gets it done at the business end of the tournament. His Grand Slam pickup truck resumed at Wimbledon in July with a competitive but relatively confident win over Nick Kyrgios. Kyrgios might fly for a while on home turf but Djokovic has the power of a Real Madrid in a Champions League final when he is allowed to stalk around Melbourne.

The only imbalance that can create opportunity for the new breed of opponents is the Serb’s handling of the return to the scene of the “crime”. He yearns for support but his eyes are firmly, almost obsessively, on the prize. This man can come back from any score, anytime, anywhere with or without the roars. Federer has gone. Nadal is struggling. Common sense says that It has to be number 22 but so much pent up energy could burst forth to complicate. When Stan Wawrinka played like a tennis God in the French Open of 2015, a crestfallen Djokovic was reduced to an overwhelmed runner-up with a two-minute ovation from Roland Garros.

After the charity match with Kyrgios on Friday night, Djokovic admitted: “I was very emotional, honestly, coming into the court, with the reception that I received. I didn’t know how that’s going to go after the events of last year.” It’s the question that remains for the next fortnight. 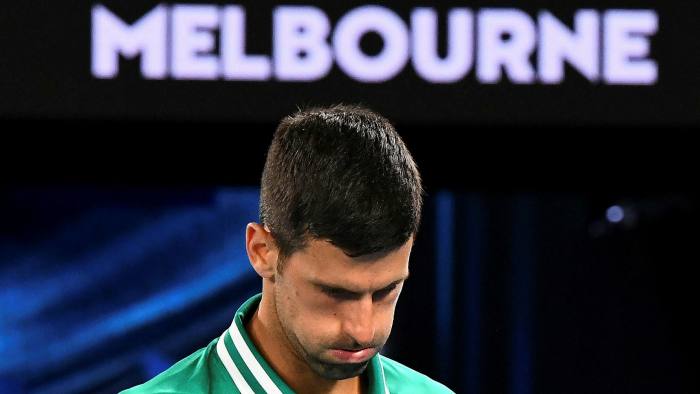