‘Novak Djokovic champion’ is trending again on Google. The 35-year-old has just landed the biggest cash prize in tennis, equalling Roger Federer’s previous record of six ATP Final titles. Despite falling victim to the teenage wannabe Holger Rune in Paris, the Serb managed to stave off twentysomething Casper Ruud in straight sets at the season’s closing showpiece in Turin. The next generation will have to wait for their heist of the major trophies. The Djoker is back and he’s looking forwards.

He’s only played eleven tournaments this year, including a Wimbledon that offered no ranking points, but a top-five ranking is guaranteed. What a difference ten months make. Djokovic spent most of early 2022 in freefall, keeping his counsel and stripping back his schedule. In July, he left SW19 cracking jokes with his new best friend Nick Kyrgios. Since the emotions of the Laver Cup, where the Serb began to find form with an admiring Federer departing the stage, he has only lost one match. There’s a real chance to equal Rafa Nadal’s magic 22 as early as possible.

Djokovic will be a free man to compete for his own Decima after Australian Immigration Officer Andrew Giles overturned the three-year visa ban which followed a very public deportation in January 2021. Whether he is welcomed back with any sense of adulation is another matter. When the 21-major winner was interrogated and held by the authorities, his incarceration was an uncomfortable way of bringing a champion down to the status of A.N. Other.

Serb is Over Down Under Drama

It was a bit like watching a drama where images are manipulated by dark forces. Except that there was no distortion of the man, the time and the place on this occasion. Human nature being as it is, some people rubbed their hands at the freak show circus. Others cried foul. There was also a surreal feeling of “who do you think you are” in the air – literally – perhaps triggered by the Serb’s social media announcements that he was flying into Australia despite an unvaccinated status. Perceived exceptionalism in a country that was being hit hard by Covid lockdowns was not going to win him a popularity contest.

After a well-earned break, Djokovic will now return to his statistically favourite court hoping for a welcome of sorts: “I really want to go there, I am over what happened this year and I just want to play tennis, it is what I do best. Australia has always been the place where I have played my best tennis, the results speak for themselves, so I am always extra motivated to go there. This time even more so.”

An injured Carlos Alcaraz travelled to Italy with the guaranteed number one status. However, nobody is in any doubt who the best player in the world is right here and right now. Djokovic was also stymied on Covid grounds in the Big Apple, unable to take part in the US Open which the Spaniard won. The two will be brought together sooner rather than later.

It was the vulnerability he showed during the loss at Flushing Meadow against Daniil Medvedev in September 2021 that got the American capital back onside with the Serb. It looks like Djokovic might need a similar breakthrough moment to make the neighbours friendly down under. However, for a man who has said that ‘90 per cent’ of a crowd is always against him, it will be water off a duck’s back. John McEnroe recently reminded everyone that tennis is not a popularity contest. Followers, shirt sales and screams of “I love you” do not equal major wins.

McEnroe said: “You’re judged by what you’ve done in the game. And you know what, in time – they might even come to like you.”  If they do, Djokovic will register it happily alongside a whole new collection of trophies. There’s time for a new chapter in Melbourne. Rublev, Tsitsipas, Ruud and company will have to wait their turn. 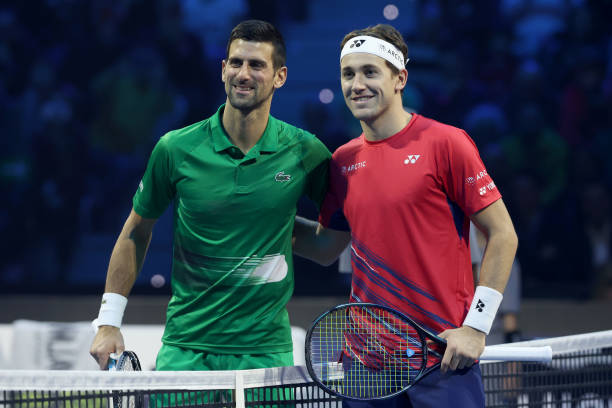