England progressed to their first semi-final in 55 years as they beat Denmark 2-1, with the help of extra time and a questionable rebounded Harry Kane penalty.

The build-up to the game returned familiar discussions around England’s formation. The answer was a maintaining of the back four, of the methods that worked against Ukraine and their hobbled back line. The new question: would it work against a more accomplished group including Milan’s Simon Kjaer, Chelsea’s Andreas Christensen and Atalanta’s Joakim Maehle?

The Danish side had failed to shrink since Christian Eriksen’s collapse, only undone by Belgium by the individual brilliance of Kevin De Bruyne, before ruthlessly dispatching Russia and Wales, and showing tenacity to batten down in a tight-knit affair against the Czechs. Indeed, the parallels for England with three years prior against Croatia – of a team combining to be more than the sum of its parts – betrayed the growing hubris of English pundits.

Still, England’s intent once again dictated the early phases, much in the same way it had dictated their path to the semi-finals. Quick out of the gate, there were a few opportunities for the Three Lions to replicate their fast start against Ukraine, Harry Kane’s in-swinging cross to Sterling on 5 minutes just out of reach. Seeing Kane on the right was rather alien compared with his presence in Euro 2020 to date, too often waiting in an isolated position for a pass that never came.

Some forward momentum was halted in the Phillips dispossessed by Hojbjerg, then Pickford giving it away to Damsgaard, leading to Braithwaite dragging wide from a deflection; the first sign of nerves in some time from this English team. Forced into stagnation thereafter, forced to keep aware of the Danish threat upfront, the crowd became restless at around 22 minutes.

Then, the Danish dream continued. Mikkel Damsgaard opened the scoring with a brilliant free-kick in the 30th minute, his quick shot swooping over the wall and silencing an already subdued England crowd. Pickford’s lack of height was clearly an issue in the save, but also his awareness; the free-kick wasn’t in the corner and typically below the standards for a goal from that range. The first goal England have conceded in the tournament, and a new, unfamiliar task for a relatively young squad.

Gareth Southgate would go on to urge calm from his players, but it highlighted the youth, inexperience and fragility of this squad; even the senior players – Harry Kane, Raheem Sterling, Harry Maguire – were less familiar with high-intensity, high stakes success; Kane with the floundering Tottenham, Sterling with a Man City failing again at the Champions League hurdle, ditto Maguire but in the smaller Europa League affair. If the response were to come, it would need to be in spite of, rather than because of, past experience.

But the response came, first in forcing a strong Kasper Schmeichel to save from Raheem Sterling. It initially suggested a shift to the margins – where Sterling would normally break free in this tournament, Schmeichel saved. But the door kept knocking, Saka broke through again, this time sliding past Schmeichel, and captain Simon Kjaer’s attempts to block Sterling a second time pushed the ball into his own net. 1-1. Punches were traded back and forth for the rest of the half, and or all the fury of this match, it was a surprise not to see any added time.

The second half began in much the same way as the second, England with the intent, buoyed by the momentum of their equaliser, as Denmark assessed their options. Harry Maguire nearly scored a header on 55 minutes, denied again by Schmeichel. Mason Mount later nearly caught the Leicester City keeper off-guard with a wayward cross, but still no luck.

A speculative penalty call followed in the 74th minute, Kane perhaps unlucky not to win one after being brought down. From there, England’s persistence was matched by Denmark’s solitude, refusing to be worn down as England placed the emphasis on patience. Every time Sterling, or Shaw, or Walker, or Mount broke down the wing, they were met with a wall of red shirts in the centre.

The Danes made their changes late in the second half; seeing an insurmountable task of breaking England down, they brought on the pragmatic trio of Norgaard, Wass and Poulsen in the 67th minute in an effort to force penalties. England’s response was their own super-sub, Jack Grealish. He was probing, but never cutting in normal time, his famous knack for free kicks making an appearance but little else.

A late desperate scramble showed the exasperation of England, reinforcing the nature of the task at hand to penetrate the Danish goal again. Jack Grealish held the ball fruitlessly, before being consistently denied by the Danish defence.

As extra-time beckoned, so too did tactical switches from the unpredictable Southgate. On came Phil Foden, effectively exiled after two middling performances against Croatia and Scotland, and Jordan Henderson, a midfield martial unable to regain fitness in time for a starring role at this Euro championship. His impact was more immediate, with a corner kick igniting a succession of near misses, including a long-range effort from an emboldened Jack Grealish that forced a save from Schmeichel, a follow up from Sterling much less troubling.

In the end, it was the cruellest of ironies for the Danes, one worthy of the nation’s fairytales consistently cited through their heroic ascent. Sterling jinked through the Danish defenders, who couldn’t contain the Man City striker before bringing him down, though it was the lightest of touches. Another speculative call, but this time VAR sided with the England attack. In playing for penalties, the Danish defence had given away a penalty. For once, timing ceased to be their ally.

Harry Kane took two deep, focussed breaths before stepping up. His kick, low and to the right, was anticipated by Schmeichel, who batted away the effort. The moment after, which would have hung in the air for an eternity for England fans, was seized by Kane, rebounding into the goal, and wheeling away once again for England.

They moved to a back five in the second half, keen to dictate play again but against a more intent Danish team; Kieran Trippier facilitating the switch at the expense of Jack Grealish. It worked emphatically. Denmark couldn’t get a foothold in the game in the second half of extra time, a deflected Braithwaite shot failing to threaten the goal, the corresponding corner easily dealt with.

Denmark was forced down to 10 men thanks to an injury after the maximum number of substitutions, and it would prove insurmountable. A final break by Raheem Sterling forced yet another save from Schmeichel, a man who deserved to be on the winning end.

As the final whistle went, the reality of what England had done became wholly apparent, the Wembley crowd of 65,000 in raptures and disbelief. It was perhaps the final monkey off of England’s back, breaking the Semi-Final jinx that had plagued them since 1966, and doing so in the manner in which they were defeated in the last one – coming from behind to eventually win in extra time.

It was however a cruel blow for the Danes, who can clearly feel they have been done a disservice; by the penalty, injuries, and ultimately an opponent of much greater and varied depth. The unlikeliest, and most noble of dreams ends tonight and will transpire to the Danes’ own thirty years of hurt since the Euro 1992 win. Yet they are a squad of vibrancy and fortitude and write them off from Qatar 2022 at your own peril.

We go now to an England-Italy final, a game of rebirth and a new reckoning. England, as effective hosts, will be bullish against an Italy squad worn down by their epic against Spain on Tuesday night. Both have been hardened by this tournament, promising a delight for a Wembley that has come alive once more. 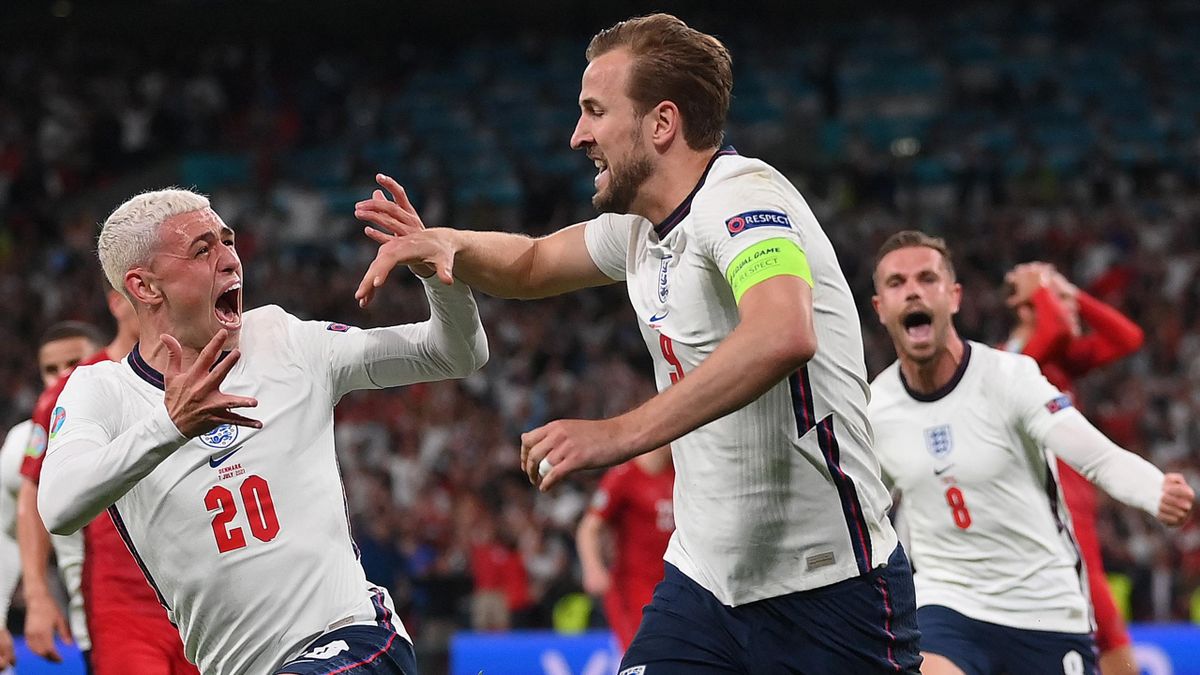