The Munich’s Allianz Arena will become the host of one of the most enticing Euro 2020 Quarterfinal encounters tonight as the Italians take on World’s no. 1 ranked National side mighty Belgium.

The Azzurri’s will look to extend their historic record of a 31-match unbeaten run tonight, Roberto Mancini has literally transformed the whole Italian set up their last loss came back in 2018 when they lost 1-0 to Portugal. Italy beat Austria 2-1 in the Round of 16 to reach the Quarterfinals however Austria did make life difficult for the Italians with intense press and defensive structure.

The Italians have not conceded a goal in 11 matches previous to the Round of 16 Austria game that’s enough of a prove how resolute their backline is with Bonucci marshalling the defence alongside Bastoni and high energy full-backs in Di Lorenzo and Spinazzola.

The task will not be an easier one for the Azzurri’s as they face almighty Belgium who were regarded as tournament favourites from the start, The Red Devils finished their group as table toppers and then played very smartly against European Champions Portugal, they surprised many with their laidback approach but it was the first-half goal from Dortmund prodigy Thorgan Hazard that proved to be the difference between the side.

The news breaking the headlines was that there’s a real possibility that Roberto Martinez’s side will miss their key stars in Kevin De Bruyne and Eden Hazard through respective injury issues which they picked up against Portugal, both the players missed the last training session and it’s highly unlikely that any them features in the Italy game.

Dries Mertens and Yannick Carrasco could both be re-installed in the Starting XI following these injuries.

Below is the transcript from Martinez during his pre-match presser:

“If they are to miss the (Italy) game, we’d like them to be available for the next matches. It will be hard to recover Eden, he’s suffered a muscle injury, De Bruyne has a different problem.”

Martinez prefers to play a 3-4-2-1 with Mertens and Yannick Carrasco just behind the big target-man Romelu Lukaku to complete the attacking front, then we have our Dortmund sitting play breaker in Axel Witsel alongside him is Leicester City midfielder Youri Tielemans. The fullbacks tend to push up especially Thorgan Hazard, In Vermaelen, Vertonghen and Alderwierald you have the best ball-playing defence in the whole tournament, the only problem is that they have all lost a yard of pace due to their ages.

As for Italy, they have pretty much a fully-fit squad available for selection the only major doubt would be Alessandro FLorenzi who has not featured yet Since that Turkey opener.

Roberto Mancini has a big dilemma in midfield with Barella’s raw energy key to Italy he alongside Jorginho becomes indispensable, though Veraitti did put up two excellent performances since coming back from Injury but Locatelli and Pessina have their cases too, Pessina has now scored 2 goals from midfield which only suggests the depth and competition for places in the squad.

I am not much impressed with Belgium’s performances in the tournament so far struggled against Denmark and Portugal, their backline looks an ageing one which can come back to haunt them at some stage. Lukaku is the real force behind carrying Belgium forwards without De Bruyne look a bit toothless.

I predict the Azzurri’s to blow Belgium away with their intensity and youthful attack, Immobile, Berardi and Chiesa are those among the scoresheet for Italy, Lukaku will also bag a goal for the Red Devils. 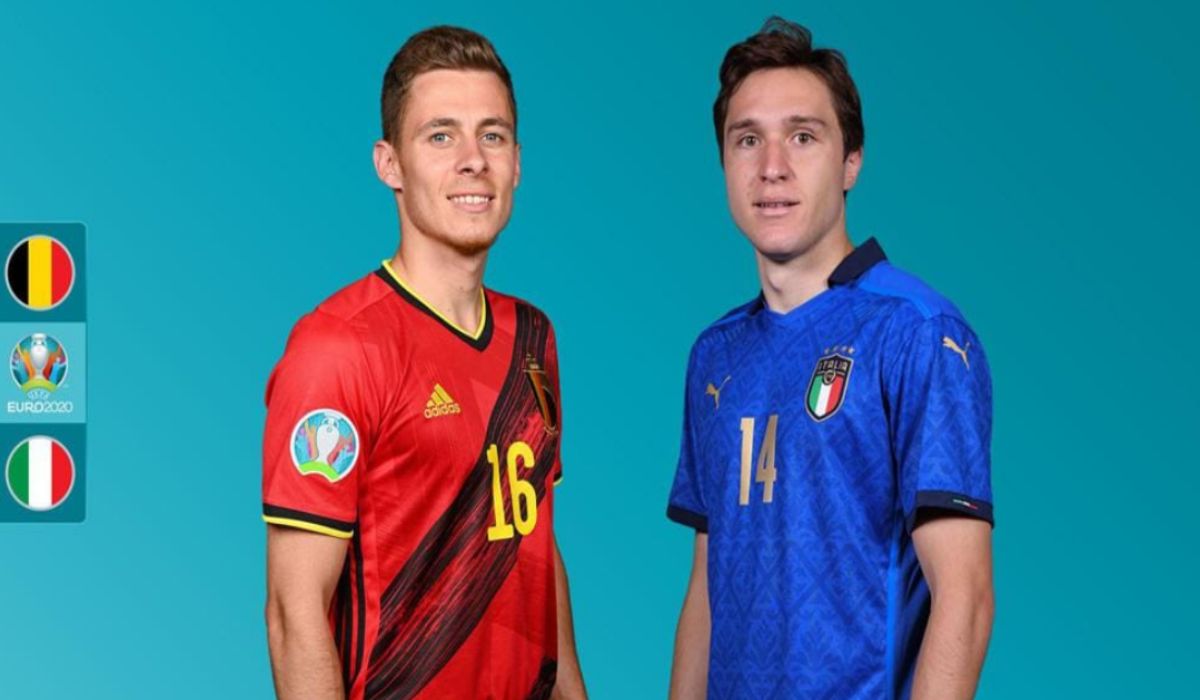