Well, that was some final day at Leopards Creek as the Alfred Dunhill Championship came to a wonderful crescendo, but who held their nerve to win.

It was sure to be a tough day out there too, fast greens (and getting faster), winds getting up and tough pin positions meant this would be a real test for all the golfers out there too.

Tee times were a lot earlier than the first three days too, and three balls as well, as storms were predicted for the afternoon, so they decided to try and get the job done before those rolled in and caused issues.

The final three-ball saw record-breaking Pole Adrian Meronk, who had a one-shot lead heading into the final eighteen holes, nineteen-year-old South African sensation Jayden Schaper, and highest world ranked player in the field, South African Christiaan Bezuidenhout, who was three shots back at the start of play.

Two of them were to end their final rounds over par as the tougher conditions certainly saw many struggles to make par, and one was to end up winning the tournament by four shots in the end after carnage on the eighteenth, so let’s see who and what ended up happening.

There was a lot of toing and froing along the way, with players jostling for position to put themselves in position to win this one, and after many position changes amongst the top few places, it came down to the final few holes with still many in with a chance to win.

Englishman Richard Bland was one of those players who were in with a chance, but he was to end up fading although still ended up tied for second along with three others after shooting a three-over 75 to end up ten under par, whilst Spaniard Adri Arnaus was also in with a chance with a few holes remaining but he would also shot over par in making a 73, and end up tied in sixth.

Tied in sixth alongside the Spaniard was Scot Scott Jamieson, who shot a two-under par 70, and another Englishman Marcus Armitage, who also shot the same score.  Someone who didn’t read the script today and shot a remarkable 67 was the second highest world ranked player in the field Robert Macintyre, who shot up the leader board a result to join Jamieson and Arnaus.

And Alex Levy, who has been coming back into form recently, shot a good 69 to share sixth place also, him and Macintyre would have been happy with their final rounds work and will take that final round form into next week’s final leg of the South African swing.

Anyway, let’s talk about the ones who started the day out in front, sadly for Poland and for Meronk there would be no first time Polish winner after he would end up shooting a four-over par round of 76 and end up tied second, along with Schaper who also shot over par, a three-over 75, and Sean Crocker, the Zimbabwean born American, who ended up shooting a level par 72.

Meronk struggled again on his front nine, but unlike yesterday he could not recover and needed an eagle at the last to try and put some pressure on the leader, but he dumped his second into the water and his chances had most certainly gone, whilst Schaper’s round took a turn for the worse on ten when he carded a triple-bogey seven, and although he dug in and kept himself in with a shout, he sent his final tee shot out of bounds, meaning his chances also went.

The final few holes saw it emerging that the top two at that time, Christiaan Bezuidenhout and Crocker would be fighting it out to take the win, and the 26 years old South African made two superb birdies to go ahead by two with two to play, but Crocker holed a wonder putt at seventeen to see him go into the final hole a shot back and in with a chance of the win still.

Bezuidenhout parred the seventeenth to remain a shot clear and Crocker stood on the eighteenth tee knowing an eagle or birdie could see him win or force a playoff, but, his tee shot went left and struck a golf buggy that was driving down the pathway and went out of bounds, disaster, and then he hit his third shot into the water on the other side of the green and would end up making an eight, he looked so upset and his chances of victory had evaporated.

With Meronk and Schaper’s struggles on eighteen, it left Bezuidenhout, who was keeping his head whilst others around him didn’t, the privilege of walking onto the eighteenth green knowing he was champion here, and his two putts saw him par the hole and shoot a three-under round of 69 and win the tournament by four, and become the 27th South African player to win multiple tour events.

This is how it finishes up…

Bezuidenhout’s second win on the European Tour sees him back inside the world’s top fifty, and also climbs 12 places into the top ten of the Race To Dubai, it has certainly been a good few weeks for the South African who after a very decent showing at the Masters backed it up with a strong showing last week in the Joburg Open and now this, a second win on the Tour.  Super stuff!!! 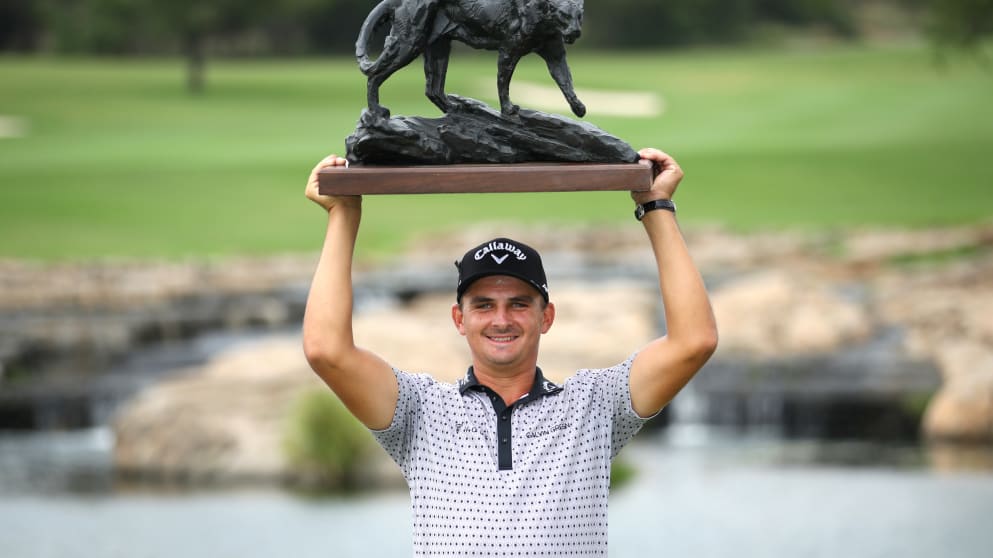