The NBA of the 1990’s was ruled under a dictatorship. Michael Jordan, Scottie Pippen and Phil Jackson were the say all, end all when it came to winning championships during their time with the Chicago Bulls. They won six rings in all (1991-1993, 1996-1998), completing two three-peats. The only team that managed to stop them from winning eight in a row were the Houston Rockets.

Led by Hakeem “The Dream” Olajuwon, the Rockets won two in a row (1994-1995). Many people would say the real reason the Bulls didn’t win eight is because Jordan decided to take a year and a half off to play professional baseball. Either way, the league was becoming sort of stale. There wasn’t much parity.

In 1998, Jordan ended his Chicago career. His retirement, combined with the fact that Scottie and Phil left, opened the door for a new team to rise. There were many contenders on the horizon. The Rockets were still players with Olajuwon and the additions of Charles Barkley and Pippen. The New York Knicks were always in the mix. They had Hall of Famer Patrick Ewing, along with Latrell Sprewell and Allan Houston.

The Indiana Pacers took Chicago to the limit in the 1998 Eastern Conference Playoffs behind the play of Reggie Miller (another Hall of Famer) and Jalen Rose. Lastly, the Utah Jazz were stacked. John Stockton and Karl Malone, (both Hall of Famers), had locked horns with the Bulls in the NBA Finals two years in a row (1997-1998). They were the prohibitive favorite the moment the word “retirement” left Michael’s mouth.

Nobody chose to look twice at the Sacramento Kings. The Kings have been in the NBA since 1948 but the franchise was nomadic, never settling down in one city for more than 15 years. They began in Rochester, New York (1948-1957) where they were called the Royals. After that, they moved to Cincinnati, Ohio (1957-1972) and their claim to fame was all-time great Oscar Robertson. He helped lead them to five consecutive winning seasons but he could never get the Royals over the hump.

Traded to the Milwaukee Bucks in 1970, he won a championship during his first year in Wisconsin. For some reason, they moved again in 1972 and split time between two cities (Kansas City, Missouri and Omaha, Nebraska). To avoid confusion, the team changed their nickname from Royals to Kings. Kansas City already had a Major League Baseball team named the Royals. In 1975, the Kings became exclusive to Kansas City and played there until 1985 when they made their final move to Sacramento.

Sacramento, approximate population 466,000, has never been a large market but the fans are loud and loyal. The Kings are their first professional team in major league sports. I’m sure by the time 1985 rolled around, they were just happy to finally have a team. It wasn’t good basketball that brought people to the arena. Their last winning season occurred in Kansas City (1983) and they were a laughing-stock.

In 1998, in an attempt to change the team’s future, they traded franchise cornerstone Mitch Richmond to the Washington Wizards in exchange for All-Star power forward Chris Webber. Webber was well-known for his time at the University of Michigan, as well as forcing his way out of playing for the Golden State Warriors. Webber was a force to be reckoned with when he was on top of his game.

He had a strong build mixed with crazy athleticism. He had a soft touch but could also provide immense power. The problem was that he had a reputation for choking when it mattered most and for having a bad attitude. He was seen as a risk by many analysts and I’m sure a few rolled their eyes, thinking “same old Kings”. It turned out to be the best move the team ever made.

Rick Adelman was hired on to replace Head Coach Garry St. Jean, who had led the team to a 27-55 record the year before. Adelman had great success for the Portland Trailblazers, winning two Western Conference Championships (1990, 1992). He installed an up-tempo style of offense predicated on ball movement.

Vlade Divac, signed as a free agent, became the team’s backbone. He was a well-rounded center that provided inside scoring, rebounding and some of the best passing from the post. He would turn out to be a perfect fit for the way Adelman wanted the team to play.

With the seventh overall pick in the 1998 draft, the Kings selected passing genius Jason Williams from the University of Florida. Many people compared his skills to Hall of Fame guard “Pistol” Pete Maravich. Like “Pistol”, people gave Williams his own nickname, “White Chocolate”. He brought street ball moves to the NBA, keeping people on the edge of their seats.  He was the ultimate description of what a playmaker should be. He knew where his teammates were going to be before they did.

In one offseason, the Kings were off and running and became known as the “Greatest Show on Court”. With Williams pushing the ball at break-neck speed and Chris Webber running alongside him, the Kings were the most entertaining team in the league.

The 1999 season was shortened to 50 games due to a lockout but they managed to post a 27-23 record, matching their win total from the year before in 32 fewer games. It was the first winning season the team put together in Sacto and they moved on to play the Utah Jazz in the Playoffs. Inexperience got them in the end as they lost in five games but it was the start of a new era.

They didn’t see any noticeable improvement in 2000, finishing 44-38 and grabbing the eighth seed in the Playoffs. Just like the year before, they lost the first round in five games, to the Los Angeles Lakers. In 2001, the team made the jump to the next level.

Peja Stojakovic could fill it up from anywhere.

Peja Stojakovic, a third year man from Serbia, was inserted into the starting lineup in 2001. He quickly became a fan favorite with his sweet shooting skills. Playing within the Kings offense, he found a lot of open jumpers and he would usually cash in. He was exactly what the Kings needed and they broke through with a 55-27 record, their best record in 40 seasons. The Phoenix Suns, led by dynamic point guard Jason Kidd, were their first round matchup this time around. This time they made it count and won the series in four games. It was their first Playoff series win in 20 years.

By this time, the Los Angeles Lakers had a firm grasp on the Larry O’Brien trophy. After the breakup of the Bulls dynasty, Phil Jackson took his zen coaching style to Los Angeles. Phil was able to combine Shaquille O’Neal and Kobe Bryant’s talents and build a dominant team.

They would turn out to be a thorn in the Kings side year after year. In 2001, the Lakers eliminated the Kings for the second year in row, this time in a sweep. Both years ultimately led to rings for the Lakers. General Manger Geoff Petrie knew he had to do something major if the Kings were going to knock the Lakers off. What he ended up doing shocked fans all over the country.

Even though Jason Williams may have been one of the most entertaining players in NBA history, there was a negative to his game. That street ball flair could often lead to turnovers and while it works in the regular season, the Playoffs are another story. The game slows down in the postseason and every possession counts. Kings management knew that they had to cut down on the sloppy play if they were going to grind out wins against the Lakers.

Mike Bibby turned out to be the missing link.

In July of 2001, the Kings traded Jason Williams to the Memphis Grizzlies in exchange for Mike Bibby. Coming from a coaching family, Bibby knew how important it was to play floor general by directing traffic and limiting mistakes. He never would rack up massive amounts of assists but he was the missing piece to the puzzle.

In 2002, the Sacramento Kings won a league high 61 games. They were the most popular team in the NBA and most fans pegged them as the next champions. The Kings breezed through the first two rounds against the Utah Jazz and Dallas Mavericks. They ended up exactly where everyone thought they would, facing the Lakers in the Western Conference Finals.

The Lakers were full of distractions with the media focusing on the fact that Shaq and Kobe didn’t like each other. It looked like the end of the road for the Lakers. After five games, the Kings were on the brink of the unthinkable. They had a 3-2 lead in the series and had two chances to close it out.

Game 6 of that series is often regarded as one of the biggest jokes in NBA history. The Lakers were awarded 27 foul shots in the fourth quarter alone on a lot of disputable calls. People were calling for NBA Commissioner David Stern’s head. Conspiracy theorists assumed the game was fixed so Los Angeles could win another title. The Kings would end up losing that game 106-102 and followed it up with a Game 7 loss in Sacramento, 112-106.

That ended up being the Kings final run in the NBA Playoffs. The Lakers would complete the three-peat continuing the run of dynasties. They were contenders in 2003 and 2004, winning 59 and 55 games respectively. Eventually, injuries and trades would end up doing them in. Vlade Divac left as a free agent in 2004, Chris Webber was traded to the Philadelphia 76ers in 2005, Peja Stojakovic to the Indiana Pacers in 2006. They haven’t had a winning season since Webber left.

For six seasons, the Kings had the league in the palm of the hand. They were one of the more enjoyable squads in NBA history. Many people would say that they were the best team to never win a championship. Even though they never broke through, the Sacramento Kings left their mark on league history. It was fun while it lasted. 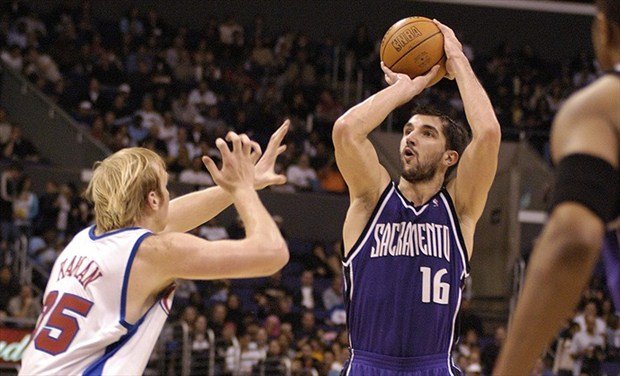