I was waiting to post my first piece until I had time to take some usable profile photos, setup my profile here and some new social media outlets, but when a piece of news like this breaks in the area I’m going to be writing in, I feel the need to speak on it.

Daniel Bryan, after months of speculation, has announced his retirement, effective immediately, from the WWE (and possibly professional wrestling all together). Reaction to this from fans has been overwhelming disappointment. After having been medically cleared by two separate doctors, many thought that we would one day see the man dubbed “The Goat” by WWE commentators back in the squared circle sooner rather than later.

The WWE’s doctors, however, due to an abundance of caution, given Bryan’s apparent concussion history, refuse to clear him to work in the ring. From a business perspective, repeated head trauma is a hot button issue in many contact sports right now. And while WWE isn’t a sport per say, it is definitely a contact performance art so it makes sense that the WWE would be cautious. From a more human perspective, it may be that they don’t want to risk Daniel Bryan becoming another Chris Benoit, Junior Seau from the NFL, or even possibly Dave Mirra from the BMX world (some have suggested the possibility of repeated head trauma from crashes/wipeouts causing Mirra to have a brain disorder that caused his suicide. This is unconfirmed, of course, but does warrant a look if he presented with any other symptoms). So while part of me wants to believe that the WWE is trying to do right by Bryan Danielson (the real name of the man that plays the character of Daniel Bryan), the WWE’s pattern of behavior when it comes to talent leads me to believe otherwise.

That’s a list of currently injured superstars involved in the WWE brand. Sin Cara just returned to action at a house show this past Saturday after having been on the shelf with an injury himself. Sami Zayn just recently returned to NXT after a major shoulder injury and surgery. Now make no mistake about it, professional wrestling is a dangerous occupation.

The rings the WWE, and all professional wrestling, uses are wood on top of steel beams with a thin layer of what is analogous to carpet padding on top of the wood. Yes, it has some bounce but they aren’t working on a trampoline. As styles of working a match have continued to evolve and become more active on behalf of the performers, these types of injuries become more common. Anyone that remembers the old days of professional wrestling remembers when a lot of every match was just ear boxing and the occasional scoop slam or backbreaker, done at a relatively safe speed. A splash or an elbow drop from the top rope was a huge deal.

These days even larger performers are flying around the ring, leaping from the top rope, or diving through the ropes to the floor outside (looking at you Big E). The types of impacts take their toll on the human body and when you are doing them 250+ nights a year, the body will eventually just say “enough” and break down.

This fact seems to be lost of the WWE, however. Between Monday for Raw, Tuesday for Smackdown, and multiple non televised house shows, performers are working multiple times a week, putting their bodies through bumps, bruises and minor injuries that never get a chance to heal. Professional wrestlers have been dealing with this business model for decades.

The difference is that in the past, wrestlers medicated through drugs (both performance enhancing and illicit) and alcohol. Their style of working a match was much less impactful on their bodies, yet they still needed multiple muscle relaxers and pain killers to make it through the day. While not healthy for the wrestlers in the long or short term, it kept them in the ring working.

These days, that isn’t an option, and rightfully so. But the WWE continues to hold their talent to the same physically and mentally exhausting schedules as the pill popping wrestlers in the 80s and 90s. This type of work schedule can only lead to further, more serious injuries for the talent (which don’t have the “luxury” of WWE-provided medical insurance, as they are independent contractors).

There are a few options that the WWE could take to actually help take care of their performers better.

1) The absolute best thing the WWE can do is to reduce the workload on the performers. They have enough talent on their roster where they can do away with or reduce the “soap opera” style story telling (multiple storylines running at the same time and stretching out through all of their programming) and focus on a smaller number of storylines at a time. And then after a lengthy or heavily featured storyline, the performers could take some time off before jumping right into the next feud and allow other talent on the roster to take over. On a similar thought line…

2) Cut Raw down to two hours from 3. Less screen time to fill would lead to less storylines to have to keep running at once.

3) Reintroduce the brand split. Have some performers on Raw and some on Smackdown. This would lead to less work overall for the talent and less damage to their bodies. This doesn’t mean that separate world titles for each program have to come back, but maybe relegate one of the midcard titles (US or Intercontinental) to Smackdown and one to Raw. The World Champ would be the only person floating between programs, and they don’t wrestle every week outside of tag matches mostly.

4) Have an “off season.” The WWE constantly tours and runs TV, never taking a break. With the amount of touring they do, the WWE could tape matches and storylines during what are now just house shows and run them as new content during the “off season” while the talent rests and recuperates for a month. Pre-taping Raw is not a new concept. Raw used to taped and it was a big deal when the show was live. WCW Nitro came along with it’s “live every week” concept and changed the game in the 90s and necessitated that WWE take Raw live. These days, there is no WCW to compete against. TNA gave the Monday Night wars another shot, shaking a weak Hulk Hogan held fist at Vince and company but ultimately lost big. Beyond spoilers leaking to the internet, I can think of no reason why pretaping shows ahead of time and giving talent some time off would be a bad thing.

Ultimately, the WWE will need to find a balance between keeping their programs and business model running and ensuring that their talent, the lifeblood of their business, can keep bringing the fans into the arenas. The permanent loss of Daniel Bryan, one of the most over (popular) wrestlers they had on their roster, along with the other numerous major names injured, should cause them to pause and ask themselves how they can change and adapt to better protect their talent.

Accidents, including concussions, will still happen no matter what they end up doing. It’s the nature of a high contact business such as professional wrestling (or sports entertainment, whichever you wish to call it). But doing SOMETHING is the first step to lessening them. 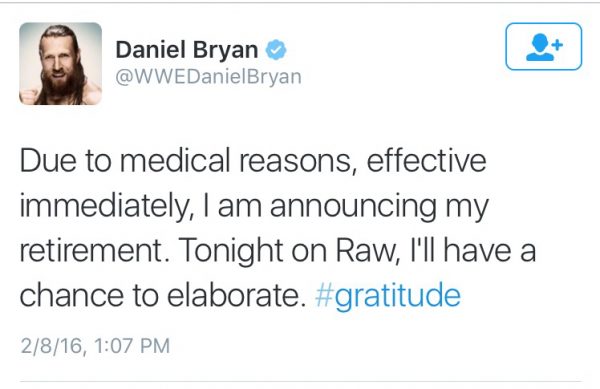