The Miami Heat returned back to the American Airlines Arena, after embarking on a three-game road trip out west, to host the Detroit Pistons. Last season, the Heat managed to defeat the Pistons at the TripleA. Heading into this game, the Heat would be without Justise Winslow, James Johnson, rookies Tyler Herro and KZ Okpala, and Dion Waiters. The Pistons would be without Blake Griffin and Derrick Rose.

Miami went on a fourteen to two run to start the contest, until Christian Wood ended the run with a fast break dunk and a reverse layup for Detroit. Bam Adebayo and Jimmy Butler knocked down a hook shot and a jumper for Miami, while Detroit responded with another basket from Wood, and a second chance basket from Andre Drummond. With Miami leading 18 to 10, they would close the first quarter on a ten to eight run, led by Butler, Goran Dragic, and two way player Chris Silva, leading the Pistons 27 to 18.

The Heat continued their scoring run into the second quarter, before Tony Snell knocked down a three-pointer to end the run for Detroit. With Miami leading 36 to 20, Drummond and Markieff Morris made a three-point play each to get the Pistons on a run of their own, only for the Heat to go on a run of their own, scoring seventeen unanswered, until a three-pointer from Wood and a hook shot from Drummond ended that run. After a poster dunk from Meyers Leonard and a mid-range jumper from Adebayo for Miami, Detroit ended the second quarter with three-point plays from Tim Frazier and Snell. By halftime, Miami led 59 to 37.

In the third quarter, Duncan Robinson knocked down a three-pointer for Miami, and Luke Kennard would do the same for Detroit. After a layup from Adebayo, the Pistons answered back with a three-point play from Morris and a layup from Drummond. Leonard and Adebayo continued to get to the rim for Miami, while Detroit kept scoring with a free throw from Drummond and a pair of three-pointers from Kennard. With the Heat leading 70 to 52, former Miami Hurricane Bruce Brown delivered a double clutch layup for the Pistons, while undrafted rookie Kendrick Nunn got himself on the board for Miami after knocking down 2 out of 3 free throws, plus a three-pointer. After a pair of three-point plays from Morris and Maker, Olynyk would make a three-point play of his own for Miami, only for the Pistons to respond back with a layup from Kennard. With Miami 78 to 65, the threes were still falling as Nunn would make a pair for Miami, and Galloway making one of his own for Detroit. The Heat continued their scoring with a jump shot from Butler and a pair of layups from Dragic. With Miami ahead 90 to 68, Wood and Maker four free throws in total for Detroit, while Olynyk made a pair of free throws for Miami. By the end of the third quarter, the Heat led 92 to 72.

As the fourth quarter commenced, Heat Captain Udonis Haslem made his season debut for Miami as he made a hook shot. Detroit answered back by going on a thirteen to two run, before Butler ended the run with two free throws after Drummond fouled out of the game. With the Heat leading 96 to 84, Butler would make another bucket for Miami, but the Pistons would continue to score as Galloway made a floater, followed by free throws from Maker and a layup from Wood. With Miami leading 99 to 90, both teams ramped up the offense towards the closing moments of the game. Though Adebayo would foul of the game for Miami, the Heat secured a victory over Detroit, 117 to 108.

The Heat went wire to wire as they maintained the lead throughout the game, similar to how they played against the Houston Rockets. Unlike the Rockets game from a few weeks ago, Miami committed 20 turnovers, which allowed Detroit try and make a comeback in the game. Despite this, the Heat were solid on both ends of the floor, and while they were missing a few players in their rotation due to injury, illness, and suspension, they made up for it by showcasing their depth from the bench. It should be also noted that Miami are undefeated at home

For the Pistons, Luke Kennard led the way with 22 points, Christian Wood and Andre Drummond had 16 points each, Markieff Morris made 13 points, Thon Maker with 12 points, and Langston Galloway with 11 points.

For the Heat, Kendrick Nunn had 20 points, Goran Dragic made 18 points, Kelly Olynyk with 13 points, Duncan Robinson had 11 points, plus Jimmy Butler and Bam Adebayo were in double-double figures. Butler had 20 points and 13 assists. Adebayo with 18 points and 14 rebounds.

The Heat head back on the road as they face the Cleveland Cavaliers. Game starts Thursday at 6pm and will be televised locally on Sun Sports. 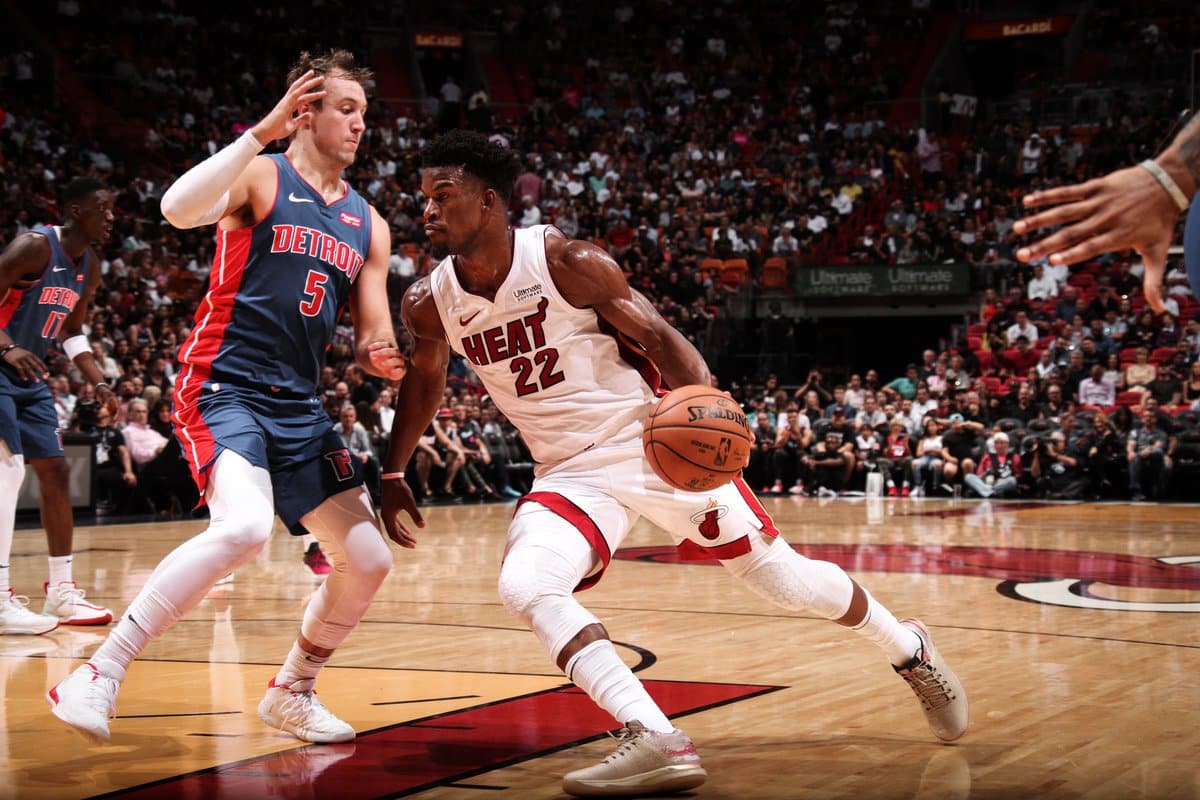