Skip to content
You are here
Home > Football > 8 Things You Didn’t Know About The Breakout Arsenal Wonderkid, Gabriel Martinelli 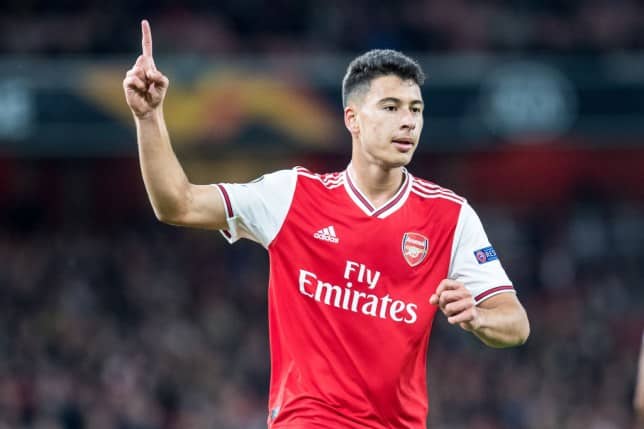 Arsenal supporters have been frustrated over the past few years over the club’s decline. In fact, the club’s support groups ganged up to voiced their concerns over the management of the club by American owner, Stan Kroenke. Josh Kroenke, Stan Kroenke’s son, who is also the director of the club, responded by saying that Arsenal supporters should be excited because good things are coming.

A few weeks later, the club announced the signing of Gabriel Martinelli from, Ituano, a football club based in São Paulo, Brazil. They followed it up by bringing in high profile players, such as Dani Ceballos (loan signing from Real Madrid), William Saliba (from St. Etienne for £27m), Nicholas Pepe (from Lille for £72m), Kieran Tierney ( from Celtic for £25m) and David Luiz (from Chelsea for £8m).

But Gabriel Martinelli has been an absolute revelation scoring 7 goals in 7 appearances in all competitions, with two goals coming from the incredible Carabao Cup exit to Liverpool. In fact, football pundits have referred to him as the next Cristiano Ronaldo. And after the Carabao Cup display, Liverpool Manager, Jurgen Klopphailed him as the “talent of the century.’’ Here are the facts about Arsenal Wonderkid that you need to know;

He is already a household name in Brazil

Despite being just 18 years old, Gabriel Martinelli has already made a name for himself in his homeland. He helped his club, Ituano, to the quarterfinals of the São Paulo State Championship this year, where Brazilian giant São Paulo FC knocked them out. He finished the tournament with six goals, which, combined with his brilliant displays, earned him a place in the team of the season. He also won an award for the newcomer of the year. His brilliant performances also got him shortlisted in the Copa America squad, although he didn’t make the final squad.

He has an Italian Passport

Gabriel Martinelli was born in Guarulhos, Brazil, but obtained an Italian passport through his father. This allowed him to qualify for a U.K. work permit, which enabled him to play for arsenal right away. In fact, football enthusiasts in Italy have asked him to snub Brazil and play for Italy. It remains to be seen which country he will choose to play for.

His signing could open Brazil to London floodgates

A few years ago, Arsenal had issues with young football talents from Brazil. However, the appointment of Edu Gaspar as the technical director could change things. Before his appointment, Edu worked with the Brazil national team. He also worked for the Brazilian club, Corinthians, as director of football. That means he has extensive knowledge of Brazilian soccer and could tap more young Brazilian talents in the future.

He unsuccessfully had trials with Manchester United and Barcelona

The Brazilian wonder kid had a trail with former England juggernaut, Manchester United, back in 2007. That was when Jose Mourinho was the club’s manager. However, the club decided against signing him and he returned to his club, Ituano. In fact, he had 4 trials with Manchester United before the ultimate rejection. And IndianSlots, a popular online gambling website in India, reported that many people placed bets on Garbriel Martinelli signing for an English club when rumors about Manchester United trials surfaced. He also had an unsuccessful trial with Barcelona.

He turned down numerous lucrative offers to play for his boyhood club, Ituano FC

Gabriel Martinelli turned down numerous offers from big clubs from Brazil, including Corinthians, to play for Ituano FC. It proved to be the right decision, as he became Ituano’s break out star. In fact, he made his debut for the club at the age of 16. His flashes of Brilliance resulted in trials at Barcelona and Manchester United, which didn’t go according to plan.

He is a versatile football player

His goal-scoring ability would get you thinking that he is a central forward. But his dribbling skills and pace allow him to play in the wings too. He can also play as an attacking midfielder when asked to. It remains to be seen where the current manager Unai Emery will play him consistently. However, with the club having a lot of talent in the wings, he could be Pierre-Emerick Aubameyang’s backup and end up inheriting the role.

He came from a poor family background

Like many Brazilian footballers, Gabriel Martinelli came from a poor family background. In fact, he started experiencing the struggles of the streets before he could even pronounce his name. His family lived in a poor neighborhood in Guarulhos, which is only known for producing young football talents.

His football career started with Futsal

Just like many talented Brazilian football players like Ronaldinho and Philipe Coutinho, Gabriel Martinelli started out as a Futsal player. In fact, he says his speed and quick feet are down to playing Futsal at a young age. He later graduated to playing football in the local fields of Guarulhos every evening.

Gabriel’s Arsenal career started on an explosive note, scoring two goals in their 5 nil will against Nottingham Forest in the Carabaocup. He’s gone from strength to strength since then, scoring in every appearance. By the look of things, this young Brazilian is destined for greatness.

has updated a post."Mighty Mike Returns"
51 minutes ago

has published a new post."Mighty Mike Returns"
6 hours ago

has published a new mt_pp."Matthew Ayles"
12 hours ago