After winning at home against the Charlotte Hornets, the Miami Heat were back on the road as they faced the Houston Rockets. In their last game, the Rockets suffered a blowout loss against Miami. Heading into this game, the Heat would get Justise Winslow back in their rotation, but Jimmy Butler would sit out with an illness, while Houston would be without Eric Gordon and Clint Capela.

Goran Dragic knocked down a three-pointer to open the contest for Miami, only for the Rockets to score ten unanswered points before Bam Adebayo made a free throw to end the run. Houston continued to build on their lead, as James Harden, Russell Westbrook, and Danuel House Jr. led the way. With the Rockets ahead 19 to 11, Harden made a pair of three-point plays, while rookie Tyler Herro came off the bench for Miami, making a three-point play of his own, followed by a layup from Winslow, and a free throw from Adebayo. The Heat drew within four points shy of the Rockets’ lead as the first quarter ended with a score of 27 to 23.

In the third quarter, Adebayo looked to jump tart Miami’s offense with a pair of free throws, followed by a three-pointer from Dragic, while Houston continued to build their lead with a three-pointer from House Jr. and free throws from Tyson Chandler and Westbrook. After a jumper from Westbrook, Kendrick Nunn made a three-pointer for Miami, followed by a dunk from Robinson. With Houston leading 74 to 54, they were frequently going to the free throw line as Rivers, House Jr., and Isaiah Hartenstein, while the Heat were still playing catchup. With the Rockets ahead 84 to 62, they ended the quarter on a seven to six run, taking a 91 to 68 lead.

As the fourth quarter commenced, Miami looked to rally back from their large deficit as Adebayo, Olynyk, and Herro knocked down shots in an effort to close the lead. With Houston leading 96 to 79, the Heat went on a ten to three run before Harden ended it with a step back three-pointer, followed by a three-pointer from PJ Tucker. Miami continued to score late into the fourth quarter, cutting into the Rockets’ lead, but it would be a three-pointer from House Jr. that would stop the Heat’s momentum. Houston would go on to win 117 to 108.

The Heat took a tough loss against Houston, having missed most of their shots early in the contest, but also allowing Houston’s offense to fire on all cylinders against their defense. The Heat would rally late in the fourth quarter, but they needed that momentum to give themselves a chance. Miami needed some balance on both ends of the floor from Udonis Haslem and Chris Silva, who sat on the bench the whole duration of the game. Miami shot 46 percent from the field, 74 percent from the free throw line, 37.8 percent behind the three-point line, and committed 18 turnovers. The Heat split the season series with the Rockets and remain in fourth place in the East.

For the Heat, Tyler Herro had 22 points, Kelly Olynyk made 19 points, Duncan Robinson and Goran Dragic with 13 points each, Justise Winslow had 10 points, and Bam Adebayo with a double-double of 17 points and 11 rebounds.

For the Rockets, James Harden led the way with 34 points, Russell Westbrook made 27 points, Danuel House Jr. had 23 points, and Gary Clark with 12 points.

The Miami Heat will head home for Thanksgiving and return back on the floor when the Western Conference Champion Golden State Warriors visit on Friday. That game starts at 8pm and will be televised on Sun Sports. 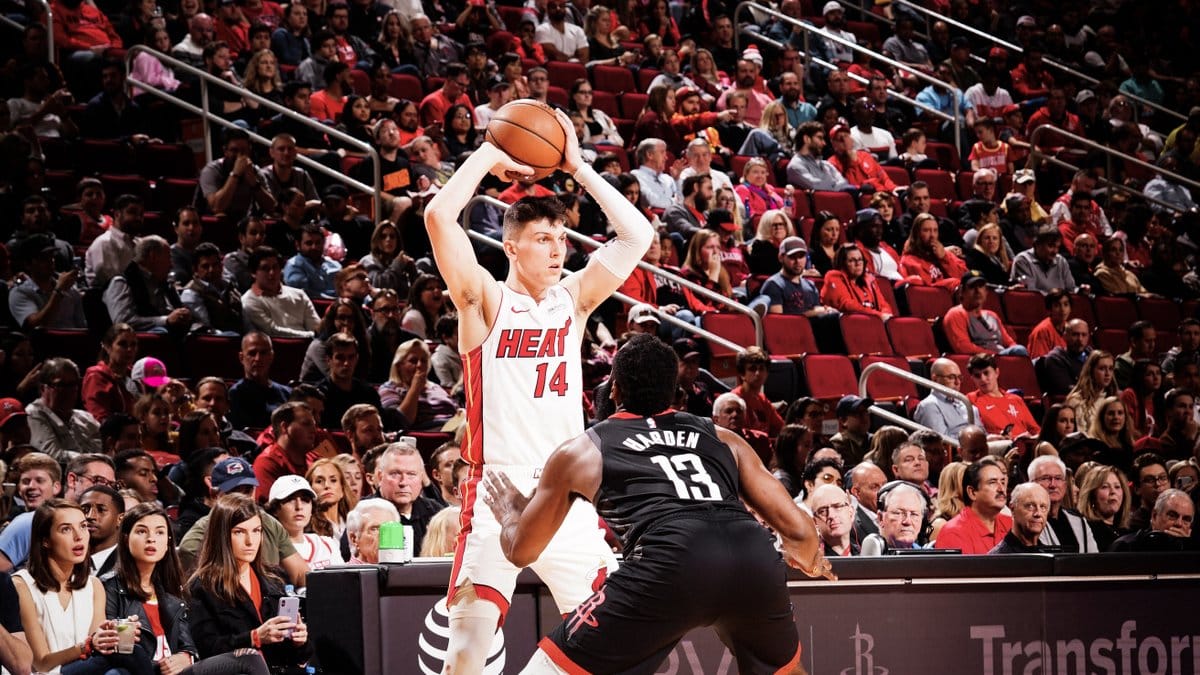