It is Sunday, October 28, 2018. The Washington Wizards are coming off of their worst loss to the season and stand at 1-5. On top if that, they lost to former center Marcin Gortat. Things are looking hopeless for this team and they are looking to fix that tomorrow.

The Washington Wizards will head into Memphis looking for a change in mood. This team has come off of their third loss in a row and need to get out of their hopeless ways soon. However, Washington has been in this situation before.

Then, December came around, and something clicked (early Christmas?).

We saw a whole new team.

The Wizards went 10-5 that month, then 12-4 in January (5-4 on the road), and climbed back up the Eastern Conference standings. The rest of the league took notice, and rightfully so. They were one of the hottest teams in the NBA.

When April came around, the Wizards had won 49 games and earned a No. 4 seed in the playoffs.

Hope had returned to the fanbase. Sure, they lost in heartbreaking fashion but there were major differences that year. For example, the words “John Wall” and “MVP” were being considered as a legitimate statement. People were seriously considering whether Wall was the best point guard in the league or not. It was a great time to be part of the #DCFamily.

The Grizzlies roll into this one coming off of a 117-96 win over the Phoenix Suns. Marc Gasol led the way with 19 points and Mike Conley added 18 points and 7 assists. The Grizzlies currently stand seventh place in the Western Conference with a 3-2 record.

What to watch out for

Mike Conley is quietly good for a player putting up his kind of numbers. His numbers so far this season have consisted of 19.0 points, 3.8 rebounds, 6 assists and 1.4 steals. So, it’s safe to say the matchup between him and John Wall will be interesting to watch.

Marshon Brooks is another one. His 18 points against the Phoenix Suns helped spark a run in the Grizzlies massacre on Saturday. He is currently shooting 48% from the field and is averaging 8.2 points on 14 minutes of play. Now watch him drop 30 tomorrow night.

Can the hopeless Wizards bounce back in this one?

If Scott Brooks chooses to go small more frequently, I would say yes. Otherwise, it will be more of the same. Marc Gasol will control the paint and Otto will continue to stand in the corner and get no touches at all.

Washington needs a better bench as three out of the five players in the starting lineups did not finish in double figures. Markieff Morris remains questionable as it stands so if he does not play, it could be interesting to see who replaces him in the lineup.

Lastly, Washington needs a fast start. Too often in games, the Wizards have let the other team get ahead of them before they begin to play. If they can start fast and control the tempo, then they will be alright. Hopefully things do not look as hopeless and bleak as they are right now.

A little bit of motivation

As one World Champion once said, “it ain’t about how you hard you hit, it’s about how hard you can get hit and keep moving forward. How much you can take and keep moving forward. That’s how winning is done!” This applies to the Wizards because they have been hit hard recently but they need to find a way to face these dark times and still persevere. 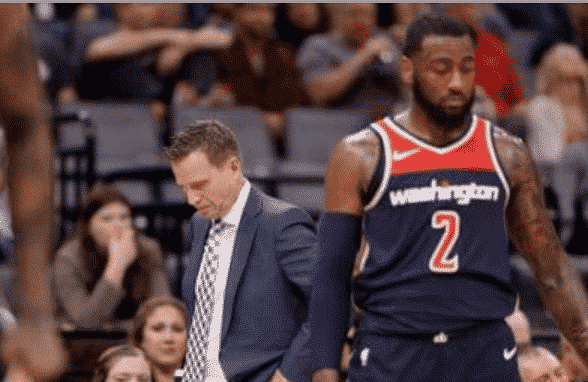