For an Indian,a test match in Perth, always conjures up an image of cricket played in the most alien conditions known to us. The isolation of the city itself from other population centers might also be a reason for it being so different from others. The name Perth used to be synonymous to the WACA ground with its fast and bouncy pitch that developed cracks wide and deep. We grew up on legends being talked about on TV like how Dennis Lillee once bowled a bouncer that took off and landed first bounce on the sight screen behind the keeper! There once were cracks on the pitch so wide that a batsman could put his bat into it! All that will change now.

Cricket is going to be played in a new stadium, called the Optus stadium. The game will be played on a drop in pitch from the old WACA ground. So, will this be old wine in a new bottle ? Would it have aged and become better for cricket ? The picture (courtesy, BCCI Twitter) at the beginning of the article should answer these questions to a large extent. The big difference is that the old WACA pitch did not sport such a green cover. If the curator retain this greenery, then the pitch will not crack so badly in the heat.

What can we expect from the teams ?

As per reports from Australia, Rohit and Ashwin will not play in the second test due to injuries. First one is easy. Hanuma Vihari will get his chance in the middle order replacing the injured Rohit. But the second one is tricky. Will Virat go for a four pronged seam attack ? Or will he go with the conventional 3 seamer and 1 spinner attack ?

The last time India played a test match in Perth, India played a four pronged pace attack. That is if you still call Vinay Kumar a fast bowler! Joking apart, If India do go with a four man pace attack, this time they will mean business. Mean business, it will be! If I were Virat, I will go with Ishant, Bumrah, Shami and Umesh and send chill down the spine of the Australian batsmen. FYI, Umesh got a fifer, the last time India played in Perth. But, I think, they might settle for Bhuvi instead of Umesh.

The Indian batting line up will have to get ready to face the music. I hope that they don’t take a cavalier approach and fold up for 100 odd runs! The Perth pitch, though scary, has also encouraged fast scoring. The batting template might be to have Vijay and Pujara anchor one end and let the stroke makers like Rahul, Virat and Rahane play their natural game.

I think Australia will play the same team that took on India at Adelaide. If they do choose to make any changes, Peter Handscomb might be the prime candidate to be replaced from the batting side. Mitchell Marsh, the local WA batsman/all-rounder, could be a possible replacement for Handscomb. Marsh is a handy medium pace bowler as well!

It will be interesting to see if Australia would make changes to their bowling line up. Historically, baring a few times,  Australia have played the lone spinner at Perth. Additionally to support the case for a spinner in the team, Lyon picked up a fifer in the second innings of the only Shield game that has been played in the Optus stadium. So, I reckon that they will go with the same bowling unit as in the Adelaide test. Whatever is the composition, the Australian bowling unit will certainly make life very difficult for the Indian batsmen at the new Perth stadium.

Coming to the batting, Aussies will have their work cut out against the lethal Indian pace attack. Shaun Marsh and Usman Khawaja will have to shoulder the responsibility to hold the innings together. Aaron Finch, at the top of the order, will be my wild card for surprises. He may want to look at the century that Warner scored in 2011/12 test match at Perth against India. Warner was then new to test cricket as well.

India have,in the past, let go of the 1-0 lead in an away series. The WI tour of 2002 and Australia tour of 2003/04 come to my mind straight away. After beating the WI at Trinidad, India slumped to 100 odd all out in the first innings at the next test in Barbados. Similarly in the MCG test against Australia in 2003, India failed to deliver the knock out punch after the blistering 195 runs scored by Sehwag. Having said these, I would expect the current Indian team to take a leaf out of the Indian teams that won test matches on similar green pitches at Headingley in 2002, Lord’s in 2014, Jo’burg in 2006 & 2018 and win the game decisively.

I am excited to see what the new Perth stadium has to offer to the cricket fans. If it retains the old glory of the WACA ground, we are in for a treat. I think the result of the match will be decided by the batting unit that shows grit and gumption to make fewer mistakes that the other.

For detailed coverage of the game, please visit Cricinfo 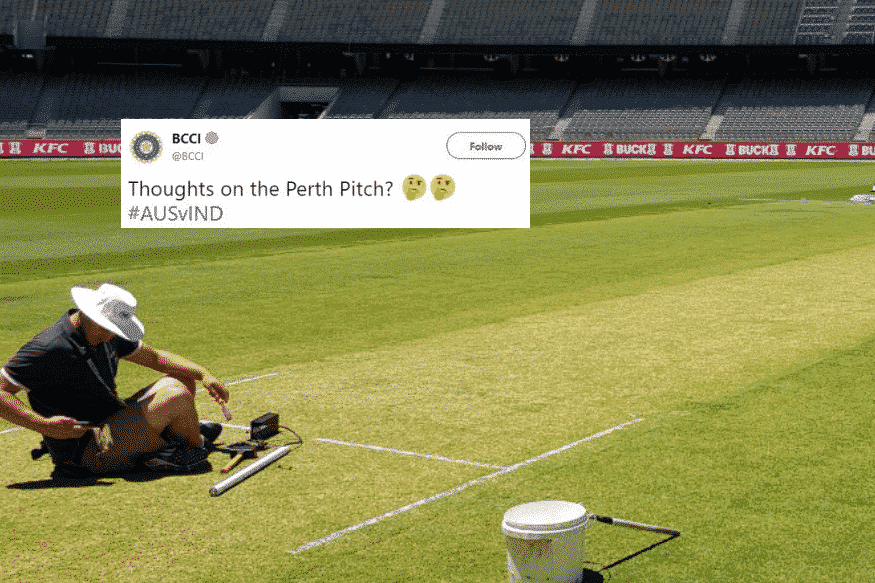