There are plenty of big named running backs in the big ten. For example you have Melvin Gordon, Ameer Abdullah, Jeremy Langford, and Tevin Coleman. One name that doesn’t get tossed around as much is Ohio State’s running back Ezekiel Elliott.

Elliott is in his sophomore season at Ohio State, and his season has been great. He has picked up a little over 16,000 yards, and recorded 14 touchdowns on the season. Elliott is a big reason why Ohio State found their way into the playoffs, and beat Alabama 42-35 in the Sugar Bowl.

Ezekiel started the season relatively slow, failing to reach over 100 yards in the first three games. Week four was his first 100+ yard game. This game was against Cincinnati where he rushed for 182 yards. After that he had only failed to reach 100 yards in three other games.

I want to take a minute to go back to the Big Ten championship game against Wisconsin. In this game third string quarterback, Cardale Jones made his first start of his collegiate career. In this games the Buckeyes held the Badgers scoreless while they scored 59 points. Ezekiel Elliott was able to take the pressure off Cardale Jones, by rushing the ball 20 times for a total of 220 yards, averaging 11 yards per rush. Elliott scored two touchdowns in this blow out victory.

After beating the Badgers of Wisconsin the Buckeyes found their self in the first ever college playoffs. Many thought they did’t deserve to be there, but the Buckeyes didn’t care.

Alabama hasn’t allowed a 100 rusher all season. Not until they hit the Zeke-train. In the first half alone, Elliott had already reached over 100 rushing yards. The second half starting kind of slow for Elliott, after the game was close in the fourth quarter. With 3:55 left in the game, the Buckeyes called Elliot’s number and he didn’t fail to produce. He took the ball right through Alabama’s defense for an 85 yard touchdown run, which put the Buckeyes up by two touchdowns. He also rushed for a Sugar Bowl record 230 yards.

With a great sophomore season under his belt, expect an even bigger and better season from Elliott during his Junior year.  And don’t expect to show Oregon any mercy. Ohio State has been used to the underdog role this season, so the National Championship will be a very entertaining game. 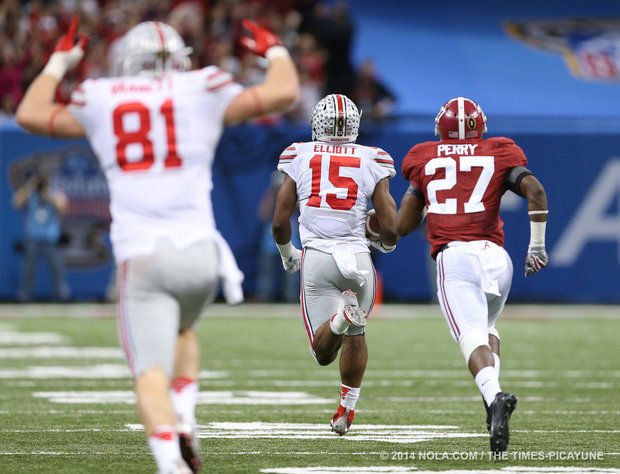