This has been an NBA season unlike any other. The entire season was put into a four-month-long hiatus due to a once-in-a-century global pandemic. There was the loss of an iconic player to an unexpected tragedy and the passing of the greatest commissioner in the history of sports. Although those are the headlines we will all remember for the rest of our lives, something else epic happened this season too: The San Antonio Spurs missed the playoffs for the first time in over twenty years.

The Spurs’ playoff streak was epic

Before discussing what went wrong this season and diving into possible solutions, the San Antonio Spurs’ historic run must be saluted. Only the Detroit Red Wings (25 straight NHL playoff appearances) have a longer stretch of postseason appearances than San Antonio in the history of North American pro sports. To put the San Antonio Spurs streak of 22 consecutive playoff runs into perspective, this season’s rookie of the year, Ja Morant, wasn’t even born yet the last time the Spurs missed the playoffs. Hats off to Coach Gregg Popovich and his staff for such a historic run.

Age and health are problems for the Spurs

To be fair, the San Antonio Spurs did play well enough to be invited to the Orlando bubble. Meaning they weren’t mathematically eliminated from the playoffs when the NBA put its season on hiatus in March. However, their best player, forward LaMarcus Aldridge, did not make the trip due to season-ending shoulder surgery. What will his health look like next season? Can the team continue to win with him as its centerpiece even when healthy?

Any time a player’s health is brought into question, their age must be brought into the conversation. Aldridge is 35 years old, meaning his absolute peak years are clearly behind him. When he was signed as a free agent, it was with the understanding that Kawhi Leonard would be the man and Aldridge would be an elite second option. However, an unexpected chain of events led to Leonard’s departure. Aldridge has handled the added responsibilities admirably. Still, it’s time for San Antonio to at least consider moving in a different direction.

The current roster still has some valuable assets

Aldridge isn’t the only veteran the team must make important decisions about this off-season. All-Star guard DeMar DeRozan is 31 years old and has a player option on his contract for next season. Given the uncertainty of what the market will look like this year, most players in DeRozan’s position are expected to take the remaining year on their contract and stay with their current team.

However, if San Antonio Spurs decides it’s time to embrace the youth movement, now may be the time to move DeRozan. That’s a better option than letting him play his final year and then watching him walk away for nothing in 2021.

34-year-old forward, Rudy Gay is in a similar position. Next season will be the last of a two-year deal he signed in the summer of 2019. Although, still a solid rotation piece, a player his age whose battled injuries earlier in his career is not a building block for the future. These veterans have served San Antonio Spurs well, but the NBA is a business. It may be time to move on.

San Antonio has a young talent they could build around

If the San Antonio Spurs do decide to move on from their core of veteran players, they have two young up-and-comers who’ve both received the public endorsement of Coach Popovich. Dejounte Murray was a rookie the last time the Spurs were a real threat in the Western Conference.

That year San Antonio Spurs found themselves up by double digits in game 1 of the Western Conference Finals before Zaza Pachulia made a dirty play that altered the course of that series and the trajectory of the Spurs’ franchise.

Since then Murray has gone through a serious injury, rehab, and completed the process of a full comeback. Coach Popovich even moved Spurs legend Tony Parker to the bench to hand Murray the keys to the backcourt. Next season will be Murray’s fifth year in the league; is he ready to be the Spurs’ new leader?

Another young Spur with a similar story is Lonnie Walker IV. After missing a good portion of his rookie year with a meniscus tear, Walker had a bounce-back second season, appearing in 61 games. Since his initial campaign was limited by injury, next season will be Walker’s second year as a healthy player.

As a 6’5” combo guard with a huge upside, he could prove to be a very nice compliment to Murray in San Antonio’s backcourt. Is having to come off the bench behind DeMar DeRozan stunting Walker’s growth as a player? Inevitably, he will make mistakes as a young player with added responsibilities. Still, now could be the right time for him to develop faster as a full-time starter.

The time to act is now

As an organization, the San Antonio Spurs have a lot to consider. Coming off a historic run of playoff appearances, led by a legendary coach, they are now at a crossroads as to what direction they should take.

Their three best players are in their mid-30’s and the Western Conference is only getting stronger. One look at the teams who made this year’s playoffs, combined with the teams whose absence can be largely attributed to injury, makes it hard to see a place for San Antonio among the top eight teams in the West next season.

The good news for San Antonio is they have a few veterans other teams may be interested in. They could potentially package the 11th pick in the draft in a trade that brings back some valuable assets.

San Antonio Spurs’ epic run yielded five championships. The fact that its over is nothing to be ashamed of. Starting over is always painful and at times it lasts longer than a franchise intends. However, it’s time for the Spurs to face the truth; the time to rebuild is now.r 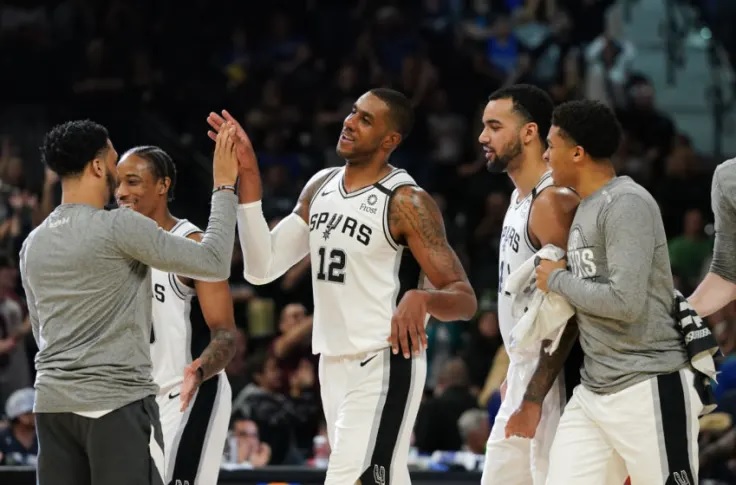