First let’s look at the 2020 Miami Heat, a team that did not make the playoffs last year but this year is in NBA Finals trying to win a championship. So what makes this team so special?

Jimmy Butler a 5-time all-star and 3 time all NBA is the leader of this team but before the season started Jimmy was considered to be a problematic player, a locker room menace. Previously Jimmy time at Minnesota and Chicago had not ended in good terms, although showing flashes of brilliance at Philly he was not resigned by the organization which allowed Pat Riley’s Heat to scoop him up.

And then shebang, Butler is a superstar who had to earn everything in his life from being homeless to winning the most improved player to leading a team to the NBA finals, he is the most blue-collar player in the league, combined with the heat organization that’s a recipe for incredible success

Rookies Tyler Hero, Duncan Robinson and Kendrick Nunn, all of whom are specialist scorers, Kendrick Nunn is a phenomenal rookie who can get his own shot and is the first team all-rookie this year, Tyler Hero is a straight-up sniper with ice in his veins as a rookie he has scored more consecutive double-digit games in playoffs than anyone else in the history of the league, this 20-year-old has established himself in the game.

The veterans Goran Dragic and Jae Crowder, Dragic played most of the season coming off the bench making way for Kendrick Nunn but as the playoffs rolled in he lead the team in scoring, 25 a game was regularly delivered to the opposing team while being very efficient with his playmaking to get others involved.

Jae Crowder is rough rider playing at the power forward position he is one of the defensive anchors of the team while being a vocal leader on the court. He also consistently puts up 10+ point per game while grabbing offensive and defensive boards for the team.

Bam Adebayo is in his 3rd season an all-star and one of the most versatile bigs in the game with a solid defense and presence around the ring, his offence is also one to watch out for as he can get his own shots and helps with screens and setting up plays. His block of Jason Tatum will always be remembered as one best defensive plays in the history of the game. He is the heart of the team and brings out the energy every night for them to succeed.

This is a bunch of high-quality players with a tremendous amount of heart in them put together by Pat Riley but it all started back in 1985-1986, the Los Angeles Lakers had one of the most talented basketball teams ever assembled, but they are rarely remembered that way. The team started the 1985–1986 NBA season with an astounding 29–5 record.

“The pundits were saying that we might be the best team in the history of basketball,” head coach Pat Riley said after the season.

Surprisingly, the Lakers stumbled in the 1986 playoffs and suffered a season-ending defeat in the Western Conference Finals. The “best team in the history of basketball” didn’t even play for the NBA championship.

After that blow, Pat Riley was tired of hearing about how much talent his players had and about how many promises his team held. He didn’t want to see flashes of brilliance followed by a gradual fade-in performance. He wanted the Lakers to play up to their potential, night after night. In the summer of 1986, he created a plan to do exactly that, a system that he called the Career Best Effort program or CBE.

When players first join the Lakers,” Riley explained, “we track their basketball statistics all the way back to high school. I call this Taking Their Number. We look for an accurate gauge of what a player can do, then build him into our plan for the team, based on the notion that he will maintain and then improve upon his averages.”

After determining a player’s baseline level of performance, Pat Riley added a key step. He asked each player to “improve their output by at least 1 per cent over the course of the season. If they succeeded, it would be a CBE or Career Best Effort.” The Lakers sought peak performance by getting slightly better each day.

Pat Riley was careful to point out that CBE was not merely about points or statistics but about giving your “best effort spiritually and mentally and physically.” Players got credit for “allowing an opponent to run into you when you know that a foul will be called against him, diving for loose balls, going after rebounds whether you are likely to get them or not, helping a teammate when the player he’s guarding has surged past him, and other ‘unsung hero’ deeds.”

As an example, let’s say that Magic Johnson—the Lakers star player at the time—had 11 points, 8 rebounds, 12 assists, 2 steals, and 5 turnovers in a game. Magic also got credit for an “unsung hero” deed by diving after a loose ball (+1). Finally, he played a total of 33 minutes in this imaginary game.

This number was calculated for all of a player’s games, and it was the average CBE that a player was asked to improve by 1 per cent over the season. Pat Riley compared each player’s current CBE to not only their past performances but also those of other players in the league. As Riley put it, “We rank team members alongside league opponents who play the same position and have similar role definitions The Lakers rolled out CBE in October 1986. Eight months later, they were NBA champions.

The following year, Pat Riley led his team to another title as the Lakers became the first team in twenty years to win back-to-back NBA championships. Afterwards, he said,

“Sustaining an effort is the most important thing for any enterprise. The way to be successful is to learn how to do things right, then do them the same way every time.”

This method of evaluation of players talent to get the best of them with the brilliance of Erik Spoelstra made the heat Beat every other team in the NBA to reach the NBA Finals. 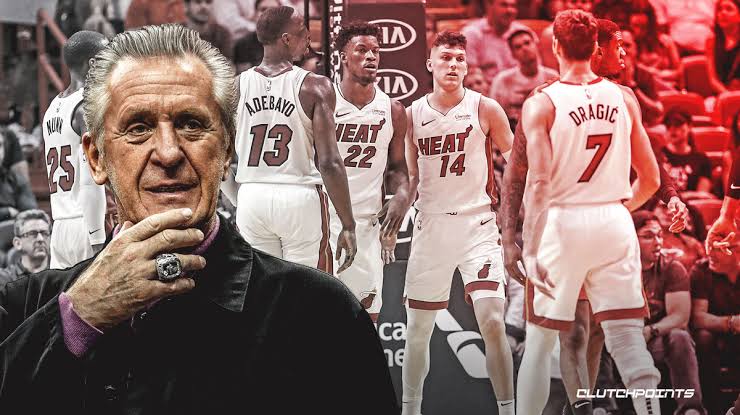