In every athlete’s life there are events that carry increased significance. Sure, competitors want to win every time they put their skills on display for the public, but certain events have added impact because of the domino affect a win or a loss will have on their career.  When the stakes are higher than usual, the event is generally considered a “must-win” for the competitor. Such is the case for Jairzinho Rozenstruik as he prepares for his upcoming bout against Augusto Sakai on June 5th in Las Vegas. There are multiple reasons why a win could take his career to heights he is yet to experience; there are also several downsides to a loss that could result in having to start from scratch. Let’s take a closer look at why June 5th is a must-win event for “Bigi Boy.”

Too many recent losses

In an organization where the determining factor in which fights happen is fan interest, Rozenstruik has been on the wrong side of the win column too many times. Bigi Boy made his UFC debut in February of 2019 and proceeded to win his first four fights. Next, he ran into a problem very few men have been able to solve by the name of Francis Ngannou. The knock out loss in the first 20 seconds of round one was the first setback of Rozenstruik’s career. Although the circumstances weren’t ideal, there was no reason to believe he wouldn’t bounce back from the defeat.

After winning his next bout in August of 2020, Rozenstruik lost again in February of this year. The loss to Ciryl Gane in a one sided unanimous decision put doubts in the minds of fans as to whether or not he is still among the elite prospects in the heavyweight division. Since their fight, Francis Ngannou has gone on to become heavyweight champion in impressive fashion. Most fans don’t think of Rozenstruik as a top contender for the belt. If he wants that to change, he’s going to have to get back to his winning ways on June 5th.

His opponent is coming off a loss

When a relatively unknown Italian fighter out of Philadelphia lost a very close fight to the undisputed heavyweight champion, Apollo Creed, the challenger became a household name and an instant celebrity. Years later, “The Italian Stallion” was no longer a novelty, he was the respected champion, Rocky Balboa. However, when he was dominated by Clubber Lang, the loss was so one sided that the public almost unanimously agreed it was time for Rocky to retire from boxing. It just goes to show that not all losses are the same.

The point is, while a win on June 5th would certainly help Jairzinho’s career get back on track, a loss would be equally as damaging. If the fight were against a feared competitor, fans would judge the performance on the skill and conditioning put on display. However, while Augusto Sakai is a respected fighter in the division, he is not viewed as elite. In September of 2020, he lost by TKO to Alistair Overeem. The public hasn’t seen him in the octagon since that day. While Sakai will certainly be motivated to prevent his losing streak from climbing to two in a row, Rozenstruik cannot suffer defeat at the hands of a man who hasn’t won a bout since May of 2020.

He is a hero in his native country

Jairzinho Rozenstruik was given the Lifetime Achievement Award by the Minister of Youth and Sports of Suriname for his international success in the world of combat sports. Suriname is a country whose population is fewer than the population of Las Vegas. It is known more for bordering Brazil and containing portions of the rain forest than it’s political power or influence. The fact is, it takes tremendous work for a fighter to make it from a relatively unknown nation to the biggest mixed martial arts platform in the world. “Bigi Boy” doesn’t just represent himself when he climbs into the octagon, he represents an entire nation.

Jon Jones is coming back soon

Jon Jones hasn’t been seen inside the octagon since February of 2020. Since then, he’s remained in the headlines for numerous reasons. He’s publicly feuded with Dana White and he’s openly challenged Francis Ngannou. Videos have surfaced all over social media of the former light heavyweight champion training to add muscle to his frame in order to move up to heavyweight. The fact is, the division will be impacted from top to bottom when Jones finally does make his heavyweight debut.

Rozenstruik has already lost to Ngannou in a very one-sided affair. However, make no mistake about it, he wants another shot at the champion. He will have to be impressive on June 5th if that dream is going to become a reality. It’s not inconceivable that Dana White lets Jon Jones, whose been a cash cow for the organization, make his heavyweight debut in a title fight with the reigning champ. Everyone will just have to wait in line. If Rozenstruik wants to make his case for a shot of his own, the time is now.

Tyron Woodley is a former UFC welterweight champion and one of the most respected competitors in the sport. However, after losing his fourth straight bout in March of this year, Dana White announced that Woodley had been removed from the organization’s rankings.

Dustin Poirier lost the UFC lightweight championship to Khabib Nurmagomedov in September of 2019. Since then, he’s bounced back with two impressive wins but it remains to be seen when or if he will get another shot at the title.

What do Tyron Woodley and Dustin Poirier have in common, they were two of the biggest names in American Top Team, the organization that represents a stable of fighters in mixed martial arts and kickboxing. In similar fashion to Tyson Fury’s well known affiliation with MTK Global, fighters who represent American Top Team carry a set of expectations with them. The organization considers themselves more than just a team; they are a brand. It’s a brand designed to stand for excellence with a focus on winning. Jairzinho Rozenstruik is a part of this team; on June 5th he must represent them with a win if he is going to reflect their core values.

Fighters have always carried the aspirations of those closest to them onto the field of battle. On June 5th, Rozenstruik will be representing a nation that needs him and a team that promotes him. He doesn’t want to let them down. If he’s successful in his quest for victory, it may get him that much closer to the elusive title shot he’s been chasing his whole career. 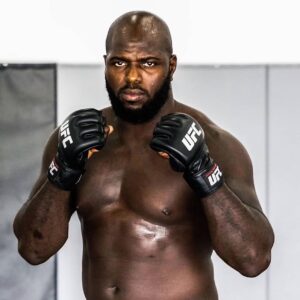