A History of British Sprinting: Jason Gardener and Darren Campbell

The first part of this series focused on two Olympic gold medalists Linford Linford Christie and Allan Wells, the two men that can claim to the best ever sprinters in British history.

The second part of this series will focus on two more recent British sprinters who both frustrated and delighted us throughout their careers.

Jason Gardener tasted his first success as a senior athlete when he won the silver medal in the 60m at the European indoors in Valencia 1994.

In 1999, Gardener broke the 60m indoor British record whilst claiming the bronze medal in the World Indoor Championships in Maebashi.

Although Jason Gardener had a poor 2000 Olympics due to injury, he carried on having success on the indoor circuit.

Jason Gardener would gain another bronze medal in the World indoor championships in 2003 in Birmingham.

The year of 2004 was the year that Gardener realised his potential as a sprinter. He went from being a bronze and silver medalist on the world circuit to a champion in 2004.

He finally won the 60m World Indoor Championship in Budapest with the time of 6.49, beating the likes of Shawn Crawford and Francis Obikwelu.

The most famous race of Gardener’s career was in the 2004 Olympic games 4x100m race, where he won his only major championship outdoor gold medal.Gardener has had a great record in the 4x100m relay, he broke the British record in the world championships in Seville, where he also claimed a silver medal alongside Campbell, Devonish and Chambers.

Jason Gardener also was part of a relay team which won the 2002 Commonwealth games, which had Campbell, Condon and Devonish as part of the team.

The team consisted of Darren Campbell, Mark Lewis-Francis and Marlon Devonish and they ran a 38.07. This race will go down in British sprinting history as one of the biggest shock medals,

Although Gardener’s career peaked in 2004, he carried on winning medals, especially on the indoor circuit. He won another two gold medals in the Indoor European Championships.

Jason Gardener also won a World Indoor Championship bronze medal and a 4x100m silver medal in the World Championships 2005 alongside Devonish, Malcolm and Lewis-Francis. Fittingly, Gardener’s last race was a 4x100m relay in 2007, however, unlike previous success, the quartet failed to finish the race.

Darren Campbell was a promising young athlete who was both talented in football and athletics, as the current star of British sprinting Adam Gemili. During his junior career, he had huge success in the European junior championships in 1991 when he won the sprint double.

However, he had to settle for silver medals in the World junior championships, after finishing second to later to be superstar Ato Boldon. His senior debut came in the Stuttgart World Championships where he was part of the relay squad.

After deliberating on whether to become a footballer or an athlete, Campbell chose athletics in 1995. He represented the British relay in Atalanta 1996, however, the British squad failed to get the baton to Campbell.

Darren Campbell’s first senior medal was in 1997 Athens world championships where he won a bronze in the 4x100m relay, the team consisted of Darren Braithwaite,

Perhaps Campbell’s most remarkable single achievement was in the Sydney 2000 Olympics, where Campbell came second in the 200m to claim the silver medal, finishing behind the later drug banned Konstantinos Kenteris.

Darren Campbell was injured throughout 2001 which may have slowed down Campbell’s flourishing career because it stumped any momentum he could have utilised after a successful Sydney 2000 Olympics.

Despite this, he won medals in both the European championship and Commonwealth games of 2002, which revitalised Campbell’s career.

Darren Campbell won the bronze medal in the 2003 World Championships in Paris, the Parisian medal triumph was his most successful at the 100-meter distance.

In 2004 his career reached its peak when he won a gold medal at the Athens 2004 Olympics in 4x100m relay beating an American team with the likes of Shaun Crawford, Justin Gatlin and Maurice Greene.

Darren Campbell last medal was in 2006 in European Championships in Gothenburg, he won the gold medal in a team consisting of Devonish, Chambers and Lewis-Francis. 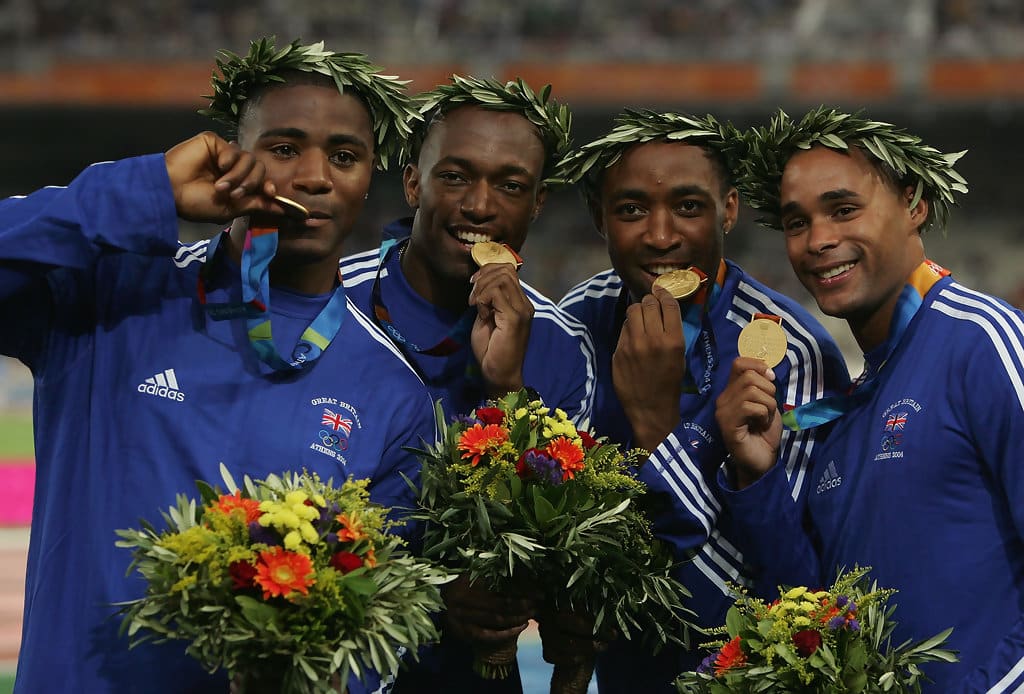