“Soccer is simple, but it is difficult to play simple.”

An offhand quote may seem at the start, but it has a much deeper meaning attached to it.

I remember, a few years ago, when the news broke that, the Dutch legend of football, Johan Cruyff, had passed; I immediately dropped everything and started getting to know more about him. I asked my father, at dinner so what did his generation think of Johan Cruyff?. He summed it up in one word “legacy”.

Legacies are abounding everywhere; every family has a legacy within their own parameters. But the legacy i.e. Total Football laid down by the Dutch Maestro, was a refreshing tactical nuance that revolutionized the entire world of football which in turn has influenced the modern era like none other.

The Flying Dutchman aka El Flaco (The Thin One)

“Totale voetbal” as known in Dutch, was something that was incepted in the labs i.e. the footballing grounds of Ajax Amsterdam and then it was refined further in the hallowed grounds of Catalonia, where Barcelona FC was the platform. From there, the seeds of total football were scattered among the up and coming coaches, which has for once and all changed the entire way football was looked at.

He trod a path which no one had, and thus in the process defined football as entertainment. Centuries earlier, when kings and queens ruled, sporting spectacles were entertainers, but those were games of brute strength and agility in which the only rule was survival. Instead, Johan Cruyff sought to focus on the artistic side of the game.

Essentially, he sought to implement a system, in which the understanding of space in a field was more important than just pelting the ball around towards the goal. He was a proponent of beauty with efficiency and he preferred to combine both to attain the desired result.

“Quality without results is pointless,” he was quoted as saying. “Results without quality is boring.”

Way before, the “Economist – Arsene Wenger”, introduced rigid diets and other healthy lifestyle habits in the late ’90s at Highbury, it was Johan Cruyff who almost two decades earlier had already revolutionized Dutch football. In modern times, the combination of understanding space and the body has helped teams across the World achieve success in a manner that has boosted the coffers of the clubs economically and visibility.

The deadly duo has entertained and exhilarated us. Add a dash of the special skills of all the individual players and you have a heady cocktail that will leave you asking for more. The concept of space in the modern era can be best illustrated by, “

Thomas Müller is nicknamed the Haumdeuter, which is German for “space investigator”. His special power is to find space, space invisible to the non-Raumdeuter and spread into it like a plume of smoke, or a form of insidious footballing dry rot” best described by Barney Ronay of the Guardian.

But while Thomas Müller dwells in that space, the vision to find such space shouldn’t be underrated. These concepts which are now so freely implemented in football was one of many such revolutionary ideas that Cruyff was a proponent of.

A player, who hailed from the working-class neighbourhood of Ajax, realised his potential and sought to act on it. His understanding of the system in Ajax, and then choosing to move to Barcelona FC on his own terms, rather than being traded as a commodity was one of the highlights in a career that shone and flourished brightly.

The demanding payment as Dutch footballers, professionalising the game and recognizing the self-worth of all footballers were more such ideas that he implemented. Developing the concept of Total Football, which was built on the conceptions of space, through which the team in defence would try and make the pitch as small as possible, while implementing the opposite strategy in the attack, i.e. giving the players space when in possession of the ball? The ability to transition into every position with no specialized position is what made the teams successful. Ajax reaped the benefits by winning three European Cups.

The developing of such a culture in football can be attributed to the Cultural Revolution that was taking place in Dutch society at the same time that was Provos of Amsterdam: a questioning attitude to tradition and authority. Obsessive concern with participatory democracy characterised both social movements and the internal organisation of the great Ajax squads, personified by Cruyff. Given the way, though his career with the Dutch squad panned out, where the failure to win the World Cup has always been a haunting presence to his much-vaunted career, it is quite suitable to say his was a career of unfulfilled prophecy.

But when Johan Cruyff was questioned, his only response was, Which team do you remember in the 1974 World Cup?.

Such was the style, that people(except the German fans, of-course) often forget that it was Germany who won the tournament staging a comeback to win 2-1. For Cruyff, though as was through his life, it was about establishing the point. Although the result may not have been what he might have envisaged, it was the impression that the Dutch team left, often gives it a mystic feeling.

Like eternal love stories, the best remembered are the ones that aren’t fulfilled.

He understood the need for individual opinions within a collective. Football is a game of cohesion and in victory, it has to be quality. When Johan Cruyff, made the transition to a manager, it was to prove that he could be as good a manager as he was as a player.  The fierce determination that had led to his playing success, in time, reflected on

The ability to recognize patterns and players who could be moulded to understand such a system reaped exponential benefits for Barcelona. He helped establish an identity for Barcelona through football. He changed the entire psyche of how people in Spain perceived football. From purely being a result-oriented business, he started making people see the artistic side of football. Obviously, winning helps and it is much easier to move ahead with your project without being questioned.

The roots of the current Barcelona can be easily traced to Johan Cruyff’s ideologies. With his very own “Dream Team”, which he managed in the 90’s he won 11 trophies. The members of that team are nowadays the most heralded coaches as well. Pep Guardiola, Ronald Koeman, Michael Laudrup to name a few.

His foundations have been tweaked accordingly, by the new generation to varied results and resources available to these managers. The results have varied as well. In the modern era, whether in its entirety or an offshoot of those earlier philosophies are still seen, be it in the Premier League or the La Liga.

Opinions in respect of sport are very simple “ Win”, Cruyff sought to revise that same phrase to “Entertain and Win”. For him, the Nou Camp was the stage, with football being poetry in motion. The hallmarks of Johan Cruyff turn, the Phantom goal, the silky way he used to drift past defenders. He was an assimilation of overpowering talent. Some have called him crazy and obsessive in the manner that he went about portraying football.

He taught footballers to value themselves as artists, instead of just restricting themselves to being athletes. He expanded the horizons of players and managers who were willing to listen.

Even centuries down the line, we will realize that these principles will still govern football. The reason why his principles were lauded was he chose to innovate and radicalize within the parameters of football, which made the game more attractive. FIFA should be thankful for the way he changed the perception of football. That perception has led them to rake in such huge amounts of money into the game.

English journalist David Miller labelled him “Pythagoras in boots” for his ability to see open space and advantageous angles on a field. Spreading joy through a football, was his message, his overview of the game was so outrageous, that it felt he was blessed with aerial vision.

To hear so much about a player which my father’s generation witnessed even three decades after his impact shows that while he may be lost in the body, his soul in football will always remain alive.

To sum up Kevin Spacey as Congressman Frank Underwood, in House of Cards when he ponders the question of affiliation by asking himself, “Let’s see if he stays with the herd or joins the pack.”

Cruyff’s life can be confidently classified as someone who chose not to stay either with the herd or the pack.

He was a trailblazer when it came to football.  Rest in Peace, Sir. 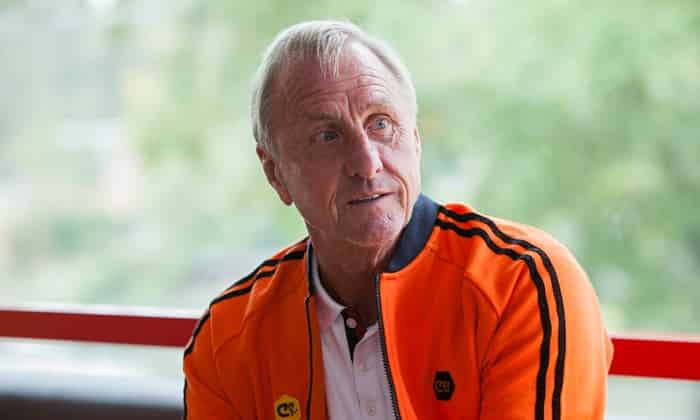