Who knows? Maybe F.C Barcelona is cursed. After a long troublesome period, they couldn’t have asked more from today’s Osasuna game. They saw their vintage Leo Messi back on the field. They saw a happy, smiling Griezmann scoring goals and involving in the Barca play more confidently. They saw their army of young players again outperforming expectations. It was going to be the day every Barcelona fan was keenly waiting for until of course Clement Lenglet got injured.

Barcelona started the game well. They had rhythm and intensity to their play. They constantly put pressure on Osasuna players with intense pressing. They were disciplined and they seemed to pick up from where they left off against Dynamo Kyiv.

Griezmann was playing more of a central role with Messi moving back to his old spot at right wing. This change seemed to have worked as both players putting up their best game they had so far this season. Lionel Messi looked like his former self wriggling in and out, carving through the defence, picking out the passes and creating chances at will. For Griezmann it was the game which provided him with his long-awaited salvation.

He looked like the Griezmann we all knew. He was confident on the ball, was creative and he linked with Messi more often. His relentless hard work finally paid off when he put an exquisite outside the box volley at the back of the net. Barca thus doubled their lead after Brathwaite tapped in a rebound to put them ahead.

One of the intriguing aspects of today’s game was the youngster Pedri. He looked like he was playing as a second pivot along with De Jong. He seemed comfortable in his new position before Koeman took him off for returning Sergio Busquets at the half time break. Barca maintained their intensity in the second half. Griezmann again seemed to be doing everything right as he provided the assist for the Coutinho goal to increase the lead to 3-0.
Then came the moment.

When you saw Leo Messi at the start of the game somehow you knew this was going to happen. He was like a man possessed. And when the moment came he dribbled to the edge of the box and struck a long ranger pass the goalkeeper to the top end corner for a goal. That was it. This what he was looking for. He took off his shirt to reveal a Newell’s Old Boys jersey with a number 10 on it. He looked into the skies for someone. He found him. It was his way of paying tribute to his teacher, his idol and his fellow countryman, the eternal Diego Maradona. It could not have been any better.

Even though Barcelona ended up winning the game with a comfortable margin. It wasn’t always smooth sailing for them. Osasuna too created chances. But most often Ter Stegen was up to the task. It was as if he wanted to redeem himself from the nightmare at Wanda Metropolitana. Even when they got past Stegen, Osasuna couldn’t score. They were once denied by the Post and then by the offside flag.

But all in all, Koeman will be happy with the victory. Especially with youngsters like Sergino Dest and Oscar Mingueza rising up to the occasion. With players replacing the injured players putting up impressive performances. With players coming on as substitutes playing hard to prove a point. Barcelona suddenly looks like a squad with great depth, which we cannot say about other recent Barca sides.

Unfortunately for Barcelona when everything finally seems to fit in together, bad luck hits them again. Lenglet’s injury will cause serious concerns within Barcelona ranks. We can expect them to go for a wild hunt for Man City defender Eric Garcia in the January transfer window. But until then they have few games at hand. If the Lenglet injury isn’t anything serious, with the rush of young blood and with the likes of Messi, Griezmann and Coutinho delivering, Barcelona can finally close this nightmare of a chapter.

If the injury is serious, then that will add to the string of crisis Barcelona is currently going through. Then Barcelona fans will have only one thing left to do. Look at the heavens and yell ” Give us a break!!”. 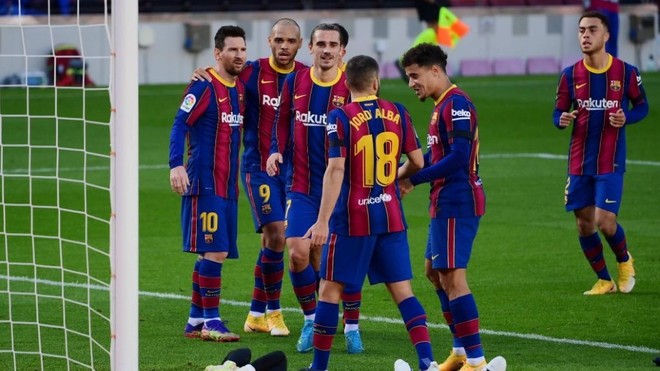