Day Six at The Championships and the remaining third-round ties in the Gentlemen’s and Ladies singles tournaments would be decided as the Last 16 for each would be finalised headed into week two.

Coco Gauff, Petra Kvitova and Rafa Nadal were all in action on Centre Court whilst on Court One Brit Liam Broady, Women’s No.1 Iga Swiatek and Nick Kyrgios were all looking to reach Round Four of the competition.

Gauff, the 11th seed, was up against a fellow American in the shape of Amanda Anisimova, who is seeded 20th at these championships, Gauff has reached the fourth round in both her appearances at these championships, and Anisimova was on her best run this year after failing to get past Round Two in her previous two attempts, and it was the 20th seed who stunned her higher seed opponents, as after losing the first set on a tie break, Anisimova raced through the next two sets dropping just three games on route to victory.

Following them on Centre was 25th seed Kvitova’s match up against fourth-seeded Spaniard Paula Badosa, the Spanish women had reached the fourth-round last year so was looking to at least equal that this time around, the Czech player though has a lot of experience at these championships and is a two-time winner of course, but that didn’t help her in this contest as the Spaniard won two very tight sets to progress into the Last 16.

Finally on Centre well what can we say that already hasn’t been saying about Rafa, the two-time Wimbledon champion and second seed in this year’s version was up against Italian 27th seed Lorenzo Sonego who was making his fourth appearance at this championships, his fourth-round appearance last year being the only time he had made it past Round One apart from this year of course, but he would have his work cut out in this one you would have thought.

And Rafa was in good form, sailing through to the Last 16 in straight sets and keeping up his chances of a calendar grand slam, he hasn’t won these championships for twelve years, and unthinkable stat that, he has every chance of putting that right that’s for sure and pick up his third SW19 crown.

Over on Court One and Broady’s attempt to reach Round Four and make it two male Brits in the last 16, it would be tough though as he was up against Jack Draper’s slayer Aussie 19th seed Alex de Minaur, Broady had never previously been beyond Round Two so this was already a championships best for him, and Aussie de Minaur himself hadn’t been beyond the third round either, so this was new ground for both, how would they deal with the pressure?

Well, sadly for the Brit it wasn’t to be, as the Aussie reached the Fourth Round for the very first time, dispatching the wildcard in three straight sets, so well done to the Aussie, who of course is dating Brit Boulter, on her match later, but it wasn’t a great morning for the Brit let’s just say, so at least her Aussie boyfriend gave her something to cheer about!!! Commiserations to Broady though, but it’s been a good run nonetheless.

Next, up on Court One was the incredible Swiatek who was bidding to make it 38 straight tour wins, she has not lost since February and was up against the very experienced Frenchwomen Alize Cornet, who has been present at every championship since 2007, although has only been past round three on one occasion back in 2014 when she lost in Round Four, it would take something special though if the Frenchwomen was to progress here.

And something special she did produce!!! The Frenchwomen put in one of her best performances to see off the number one seed 6-4 6-2, an incredible result for her and the draw, which was already wide open!!!

The final match on Court One was the hotly anticipated matchup between Kyrgios and Greek fourth seed Stefanos Tsitsipas, the Greek player has actually been knocked out in the first round at three of his four previous visits to Wimbledon, but did reach the fourth round in 2019 so was attempting to equal that at least, but he was up against an Aussie who if he lets his tennis do the talking will prove a real threat in this one. The Aussie reached Round Three last year so wanted to go at least one better this time around.

ALSO READ:  British No.1 Norrie into Round Three, Raducanu, Murray crash out on Day Three at Wimbledon

A very fiery contest ensued, unsurprisingly, with Kyrgios being warned for swearing at one point and Tsitsipas twice being warned for hitting balls into the crowd after losing his temper over the Aussies’ tactics, and the Greek accused Kyrgios of bullying in the press conference afterwards too, something the Aussie denied afterwards, anyway the fourth seed crashed out in four sets, meaning the box office Aussie is into the Last 16.

To the outside courts then, and on Court Two came Kate Boulters time once again, she was first up on Saturday morning against Harmony Tan, conqueror of Serena Williams in Round One, of course, this had the makings of a very good match so did it prove to be? Both women were on their best runs at these championships, and Boulter of course came from a set down to defeat last year’s runner-up and sixth seed Karolina Pliskova in the last round. She lost her gran Jill only two days before that win, so no doubt it’s been a tough time mentally for her, but no doubt she is doing it for her Gran, could she continue her run here?

Sadly for her, no, as Tan was in imperious form and brimming with confidence after her two big wins so far in the championships and raced to a 6-1 6-1 win inside an hour to continue her amazing run at this year’s competition, whether Boulter’s emotions of the last few days had finally caught up with her who knows, but she looked lost out there, however, it’s been a good week on the court apart from that and she should be proud of her achievements. Tan was superb though and now takes on Anismova in the Last 16.

The experienced Frenchman Richard Gasquet, who was making his 15th appearance at SW19, took on exciting young Dutch 21st seed Botic van de Zandschulp who was making his second appearance at these championships, he reached Round Two last year so had already bettered that, but he was to go no further in these championships as the Dutch player won in four sets to reach the Last 16 of the competition for the first time.

2019 champion Simona Halep was up against Poland’s Magdalena Frech who was making her debut at this tournament and looking to reach the Last 16 at her first attempt, but the 16th seed from Romania was too good, winning the match 6-4 6-1, setting up a Last 16 tie with, and  American 11th seed Taylor Fritz and 29th seed Jenson Brooksby were also in action, Fritz won in straight sets against Slovakian Alex Molcan, but Brooksby was beaten by Chile’s Cristian Garin meaning he reached the fourth round for the second time in succession.

And 8th seed Jessica Pegula, who saw off Harriet Dart in the last round, and Czech 13th seed Barbora Krejcikova were also looking to reach the Last 16, however, Pegula was stunned as she was beaten in straight sets by world no.80 Petra Martic, and Krejcikova was also dumped out of the competition too as after she had won the opening set 6-2 against Aussie Ajla Tomijanovic, she lost the next two sets 6-4 6-3 to bow out of the championships.

Kazakhstan’s Elena Rybakina, the 17th seed, equalled her best ever performance here when she reached the Fourth-Round last year, after seeing off China’s Qinwen Zheng in two very tight sets, and there were also two games involving unseeded players on Courts 12 and 18. American Brandon Nakashima, who had never been past the first round until this year, defeated Colombian Daniel Elahi Galan, and Aussie Jason Kubler, who had lost in Round One in his only other appearance at the championships back in 2018, saw off American Jack Sock.

There were more doubles games today, and also the Boys and Girls singles began too, for those results and any other results plus tomorrow’s schedule, please visit https://www.wimbledon.com/en_GB/scores/schedule/index.html 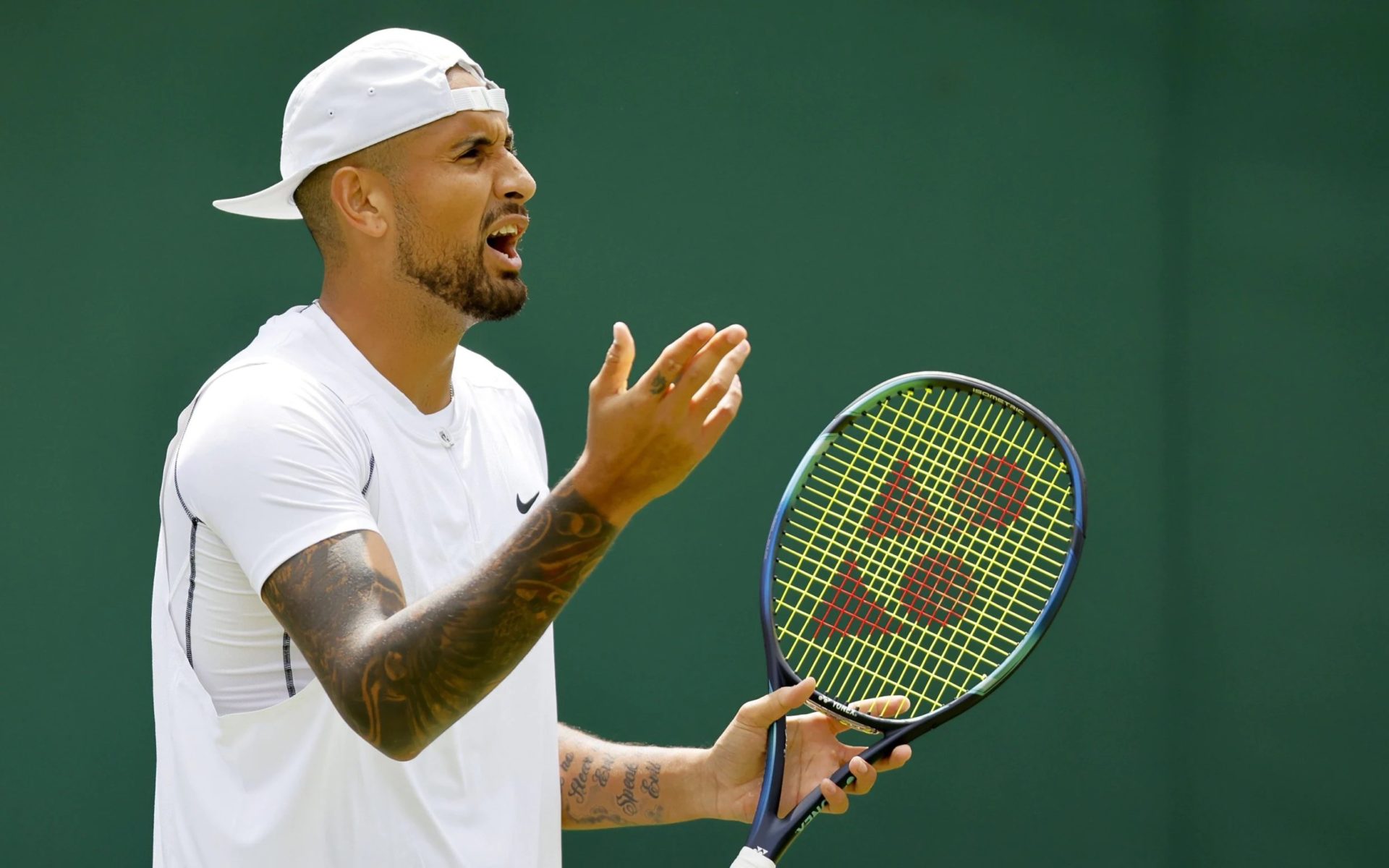