The League of Legends World Championship, better known as Worlds, is the biggest event of each LoL season. A total of 24 teams attend it and its duration is at least 5 weeks. This year, the competition will be held in North America, in places like Mexico City, New York City, Atlanta, and San Francisco.

As usual, Worlds will feature a lot of hyped matches that you can watch. These matches also constitute excellent LoL betting opportunities. Click here to bet on league of legends with bitcoin and other cryptocurrencies.

Worlds 2022 starts on September 29th and lasts until November 5th. However, because of Riot Games’ policy to hold the world championship in multiple locations if possible, Worlds 2022 will not take place in a single arena, as esports tournaments usually do, but in 4.

Usually, Riot likes to organize its LoL World Championships in Europe and other parts of the world. But this time, the company chose to stay close to home and delight North American fans with the best LoL action they can watch.

There will be two rounds of Play-Ins and these two rounds will determine the 4 teams that will join the other 12 participants in the Groups. A total of 12 teams compete for those 4 spots and the battle is usually fierce.

For the first round of Play-In matches, the teams are divided into 4 groups of 3. These groups use the Double Round Robin format. Every match is Bo1.

For the Group Stage of Worlds 2022, Riot has decided to use the standard format. The teams will be divided into 4 groups of 4 and the Double Round Robin format will be used. Every match is Bo1. So practically, we’ll have the groups played twice in the round robin format.

Some organizers like to do Bo2 matches instead of 2 Bo1s because it’s practically the same thing. But Riot chose to give its fans a longer show.

The top 2 teams from each group advance to the Playoffs.

The Playoffs of Worlds 2022 will have 7 matches and each of those matches will take place on a separate date. Every match is Bo5, so there will be plenty of action to watch despite the single-match per day format.

LoL Worlds selects its participants from all around the globe and Worlds 2022 will be no different. Of course, priority is given to those regions that have demonstrated exceptional skill and dedication over the years. Otherwise, the League of Legends World Championship would no longer be a battle between the strongest teams on the planet.

China (LPL), South Korea (LCK), and Europe (LEC), as you might expect, will each be offered 4 tickets. North America (LCS) received 3. Other regions got considerably less.

Another thing to keep in mind is that most of the Group Stage seeds will be offered to teams from the 4 big regions: China, South Korea, Europe, and North America. The other regions will mostly receive Play-In spots.

This is perfectly normal given the fact that the best 4 regions are much stronger than the rest. It would make no sense to ask a team like T1 to compete against one from Japan or Oceania. The skill difference is enormous. Riot knows this, so it gives its strongest teams a spot in the Group Stage.

To some degree, being able to start in the 3rd stage of the tournament is an advantage because by the time you get to compete, you’re fresh and have had the chance to see some of the other teams in action.

But on the other hand, it could also be a disadvantage. Without the opportunity to test your strategies against lesser opponents, you’re running the risk of having a lot of flawed strats that aren’t nearly as good as you think.

The teams that will get to compete at Worlds 2022 are selected based on their regional results and especially, the Summer Split results. Everyone who performs well in the local league is granted a spot in the Group Stage or at least the Play-Ins of the world championship.

The regional Summer champions qualify automatically. Other teams are given the opportunity based on their region and other factors. For example, in Europe and North America, the top 2 teams of the Summer Split qualify for the Group Stage.

In China and South Korea, the qualification system is a bit different. In those regions, the champion qualifies, followed by the team with the highest number of championship points, followed by the winner of the Regional Finals. 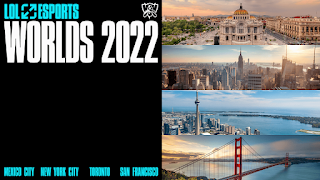