In the Damian Lillard era, the Portland Trailblazers have made the playoffs 4 out of 5 seasons. They have been able to make it to the second round twice but being eliminated both times. There is a highlight that two of those series they did lose to the eventual NBA Champions, but if you want to be the best then you have to beat the best, but they just haven’t been able to do that.

Damian Lillard won the Rookie of the Year, which is great. Over the past 10 years, we have seen a few Rookie of the Years not able to match their great first season. Luckily for Portland, Damian Lillard wasn’t one of them. Looking at his 5-year progression it looks like he is starting to enter his prime. He currently is averaging a 25.8 ppg, 6.2 apg, and 5.0 rpg, which is remarkable. What is even more remarkable is that in 5 completed seasons he has played in every game but 14. He is a leader and a reliable healthy one at that. He has the capability to score a lot of points or getting the team involved in the offense. Overall their best player and one that any team in this league would be happy to have.

If Damian Lillard is Stephen Curry then CJ McCollum would be his Klay Thompson. After a low statistic, two years entering the league CJ has blown up those stats in year 3 and hasn’t looked back since. After averaging only 6.8 ppg he practically took an elevator to 20.8 ppg the following season. He may not be as good defensively,  but he can definitely shoot it like Klay during his first 4 seasons in the league. Overall he has been doing killer work and still has a year or two before entering his prime.

Jusuf Nurkic came over last season in a deal with Denver, and boy is Denver kicking themselves now. This big man is doing everything you want a big man to do (minus the 3pt shot). Offensive end he is setting screens, passing the ball and averaging nearly 15 ppg. Defensively he is averaging nearly 8 rpg (6 of those on the defensive end), and 1.3 blocks per game. The crazy part that he is only 23 years old and still has time to improve on both ends of the court. The only thing to worry about is that he has had some injuries already, but it is expected from someone who towers 7 feet tall. If he can stay healthy then watch out for the tower in Portland.

Portland has more solid pieces than listed, but these three are the core of this team. With the close bond between Lillard and McCollum to the towering monster in Nurkic, this is a competitive team. Portland should expect to see a lot of playoff basketball in the near future.

Lebron James has never played in the Western Conference. Does Portland give him a reasonable chance to win? Yes. They might not be the best team to go to in terms of winning that Championship, but Portland is right there. Portland has a solid starting lineup and a good bench, so an addition of Lebron James would take them to the next level. This team does have the playoff experience that Lebron James should look for when deciding a team. They may not have been able to make it past that second round, but with the addition of Lebron James, it’s hard not to think they can. There are a few young guys still growing and learning, but there are 7 players who are 26 + in age that have lots of experience.

Lebron James joining this team would create a great story battle against Golden State Warriors. Damian Lillard facing his hometown team and guarding the two time MVP Stephen Curry. CJ McCollum taking on Klay Thompson in the battle of shots. Lebron James continuing the battle with Kevin Durant. The question is can Jusuf Nurkic handle Draymond Green? On paper, this looks like a solid Portland team that can give the Warriors a run for their money, especially if Jusuf Nurkic continues his recent rise.

Is this a realistic option? Yes. Is it the best possible team to go to in order to win? Maybe not. Can Lebron James win an NBA Championship here? It is very possible.  Portland Trail Blazers haven’t won a title since 1977. Will Lebron James bring another NBA Championship for a team that has long been seeking for one? Portland fans cross your fingers because you have a chance.

Check out my page for more NBA articles: http://worldinsport.com/profile/TroyWoodland/ 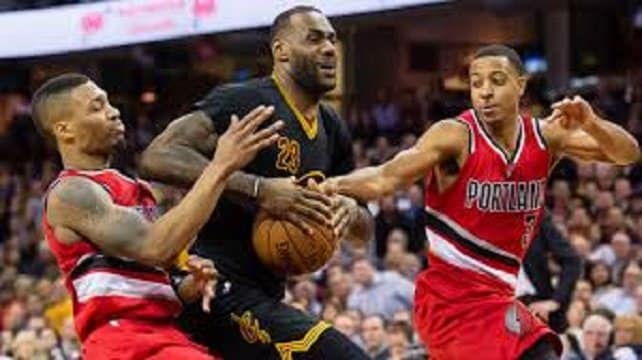