The Emirates FA Cup Fifth Round takes centre stage this week, with eight ties to come, Tuesday night saw two of those take place, but before we go onto those two matchups, lets quickly look at the final Premier League game of the weekend which happened on Monday evening at Elland Road which saw Leeds take on Palace…

Patrick Bamford scored the 100th goal of his career as Leeds United gained a deserved victory over Crystal Palace to move into the top half of the Premier League table. The 27-year-old finished into an open goal to make it 2-0 as he converted a rebound after Eagles goalkeeper Vicente Guaita had parried Raphinha’s shot. Earlier on, Leeds had taken a third-minute lead when Jack Harrison’s strike from the edge of the penalty area took a big deflection off Gary Cahill and looped past Guaita. It was a disappointing night for Palace though who missed the services of Wilfred Zaha, and in fact they have lost 17 games out of 19 without him, and all four league games this season too, so he really is a big part of their side, so without him they tend to struggle, as they did here in this one. 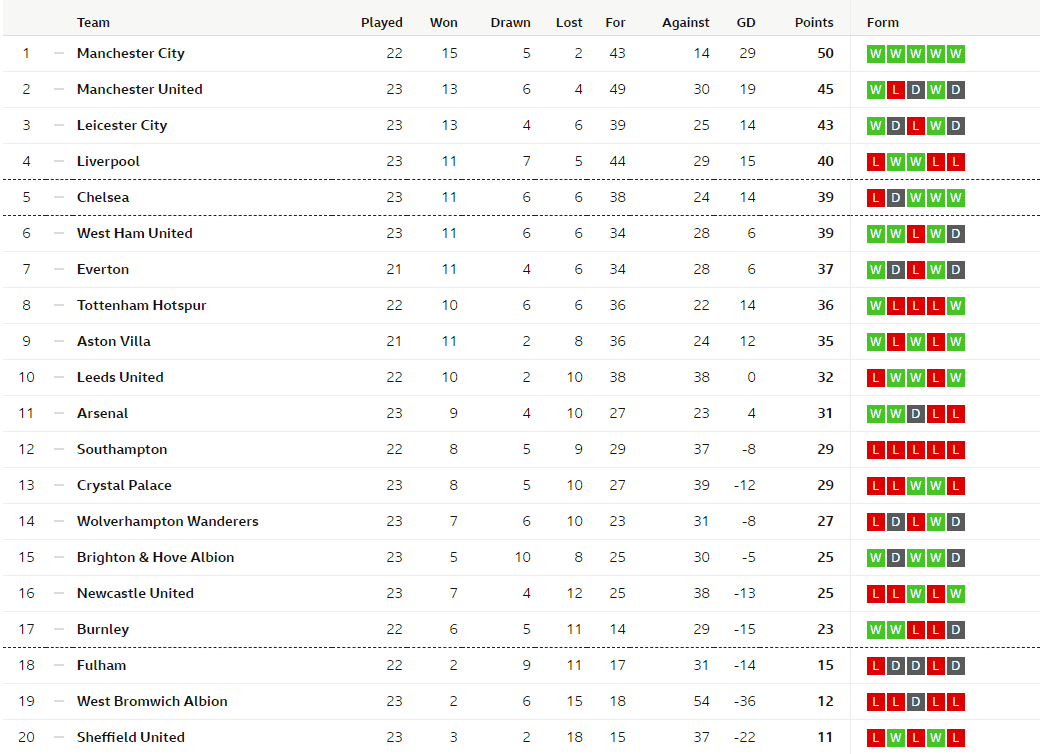 City are in charge now, and then there are half a dozen sides aiming for that fourth spot, whereas down the bottom it is looking bleak for the bottom three.

Right, onto Tuesday night’s action in the Emirates FA Cup, and the first two Fifth Round ties as Premier League Burnley hosted Championship side AFC Bournemouth and then Man United took on West Ham in an all Premier League tie at Old Trafford…

This was Burnley’s second FA Cup tie at Turf Moor this season, and on that occasion, they had almost come a cropper to League One MK Dons, eventually squeezing through on penalties after equalising deep into stoppage time to force extra time, but they breezed past Fulham at Craven Cottage in the last round to set up this tie.  Both of Bournemouth’s ties this season so far have come at home, and they have seen off spirited League Two sides in the shape of Oldham Athletic and Crawley Town, conquerors of Leeds of course, so this was the first time they were underdogs, and away from their Vitality Stadium too, so how would they fare? Well, very well actually, as after twenty-one minutes they took the lead when a lovely move saw David Brooks play a pass to Jack Stacey and he fired across goal for Sam Surridge to tap home from close range, and with two minutes remaining they sealed their passage into the Quarter Finals for only the second time in their history when Junior Stanislas emphatically converted a penalty after Surridge had been felled. It had been a very good performance from the Championship side, and a super night for the club, whilst disappointment for Burnley, who were not at the races in this one.

United have been drawn at home in every round of this season’s competition so far, and the previous two rounds saw them squeeze past Championship Watford before their fantastic win over Liverpool in the last round, whilst The Hammers squeezed past National League outfit Stockport County in Round Three in tough conditions at Edgeley Park before they demolished League One Doncaster Rovers at The London Stadium to reach this stage and set up this tie. It was also second versus sixth in the Premier League so a decent match was anticipated, would we get one though? Well, Man United did most of the running in the opening half but found their goal-bound efforts blocked, or see Lukasz Fabianski make a couple of decent saves, one from Anthony Martial and another from a deflected header from Victor Lindelof which he brilliantly tipped onto the post, whilst West Ham had barely threatened the United goal.

In summary, though the first period had not been very good and both teams did look well off the pace, so much to improve in the second period if this game was to spark into life. It had been a bit of a brutal night for The Hammers thus far, they had lost two centre-halves, Angelo Ogbonna to an ankle injury, and then his replacement Issa Diop to a concussion, and then Andriy Yarmolenko limped off with what appeared to be a knee injury, so the visitors as said were certainly in the wars, although the changes made appeared to have improved them in the second period.

Man United had been nowhere near attacking wise in the second period in what was continuing to be a rather drab affair, and the hosts looked to Bruno Fernandes and Scott McTominay for the final twenty minutes to see if they could spark the hosts into life. The spark never arrived, and the game went into extra time, both sides had made positive changes before the end of normal time, Man United brought on Edinson Cavani, whilst West Ham sent Said Benrahma into the fray, could one of them make a difference?

It was to be one of those original replacements that produced the winning moment seven minutes into extra time as the hosts broke at pace and the ball ended up coming over to Marcus Rashford and he touched the ball into the path of McTominay who ran onto the ball and fired a powerful first-time effort beyond Fabianski, and Man United had won through to their seventh straight Quarter Final appearance. A game to forget for sure, but the twelve-time FA Cup winners won’t care to much, they are three wins away from a thirteenth crown.

Six exciting ties to come (we hope!!!) stay tuned for a review of what happens in those!!! 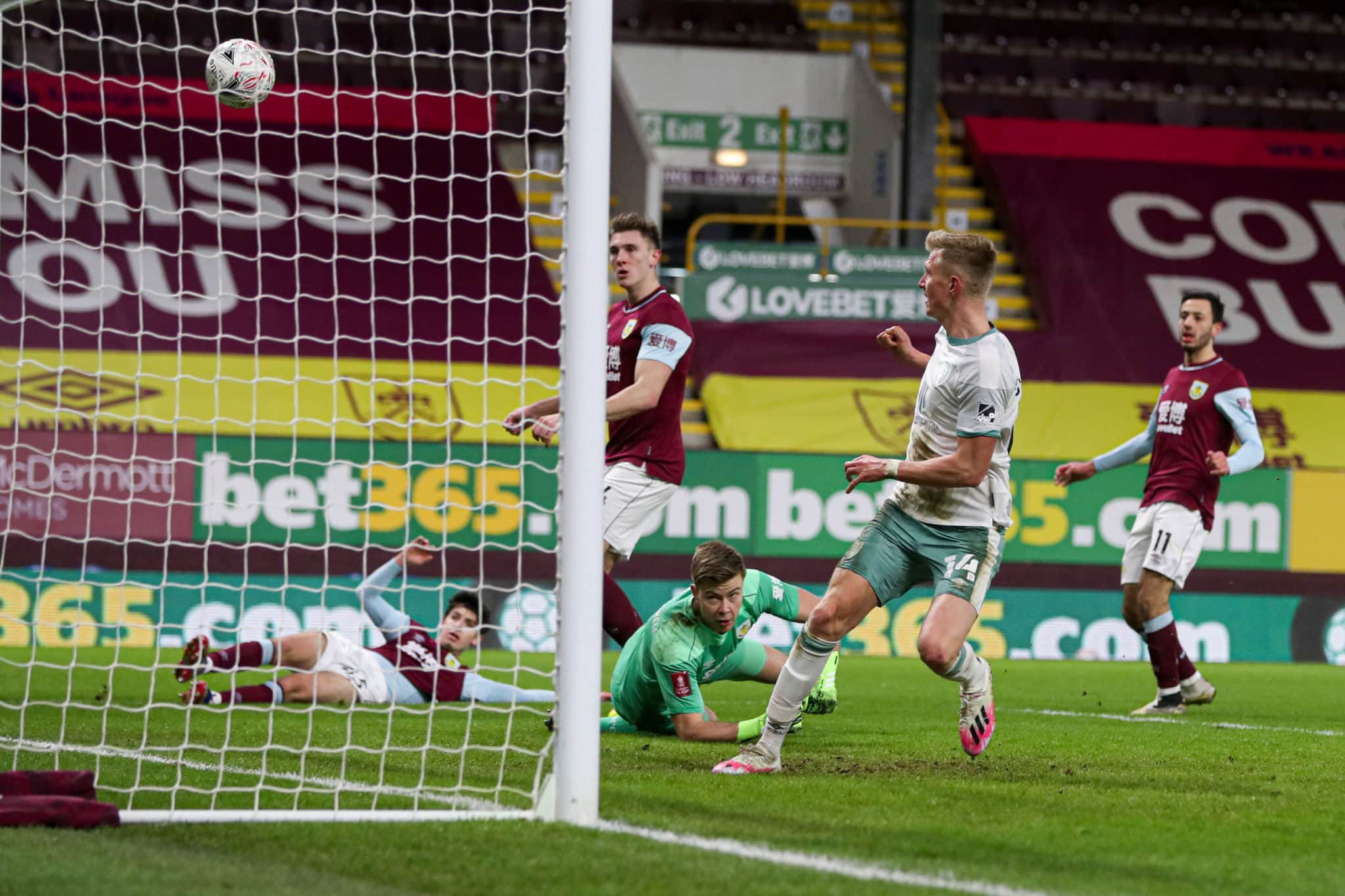