Marseille’s Ligue 1 match against Nice on Sunday has been abandoned with the visiting club refusing to emerge from the dressing room after Nice fans invaded the pitch to spark a brawl.

With Nice leading 1-0 thanks to Kasper Dolberg, fans at the Allianz Riviera had been throwing objects at Marseille players throughout the match, and Payet threw a bottle back into the crowd in the 74th minute after being struck as he prepared to take a corner kick.

This angered many supporters and soon after, fans invaded the pitch, dropping a billboard to access the field to battle with the Marseille players. A brawl ensued with fans, coaches, and supporters clashing on the pitch.

A coach embroiled in the chaos appeared to connect on a punch thrown at a supporter. In the rush, one person appeared to be injured before being evacuated on a stretcher when calm returned. Nice player Dante was seen trying to talk to angry ultras, but by then the red mist had descended among the visitors. Scuffles continued as players and staff made their way to the tunnel and Marseille boss Jorge Sampaoli was held back by his own players.

After a 90-minute delay officials wanted to complete the rest of the match, however, the Marseille players refused to go back out.

Nice president Jean-Pierre Rivere had appealed to his club’s supporters over the sound system for calm during the delay, but angry Marseille players and staff were adamant in refusing to carry on.

The referee blew for the final whistle in the 75th minute with only the Nice player’s insight following a brief suspension to proceedings, and according to Ligue de Football Professionnel (LFP) rules, Marseille has been handed an automatic 3-0 defeat pending further review. However, it’s understood Marseille will take action with the LFP to get this reversed.

After the match, Marseille president Pablo Longoria said: “We need to set precedents for French football. “The referee was with us, he confirmed that to us, that safety was not assured. He decided to abandon the match, but the LFP decided to restart the match. It is not acceptable for us.”

On the other hand, OGC Nice President Jean-Pierre Rivère partially blamed Payet and his team-mate, Alvaro Gonzalez, for the chaos after they retaliated by hurling bottles back at Nice fans and accused Marseille staff of hitting some of the home players.

“It’s disappointing that the game ended like this,” he said.

“Everyone saw what happened. We can’t deny that water bottles were thrown because we could all see them. What ignited the clashes was the reaction of two Marseille players who retaliated. Afterwards, it is deplorable that the Marseille security staff intervened on the ground and hit our players.”

French daily L’Equipe reported visiting players Payet, Matteo Guendouzi, and Luan Peres were injured in scuffles with the crowd and riot police were deployed in front of the tier packed with Nice fans.

This is nothing new to Marseille, only two weeks ago Marseille’s match against Montpellier was briefly halted because of the crowd throwing objects at visiting players. Marseille midfielder Valentin Rongier came away with a busted lip from that match. 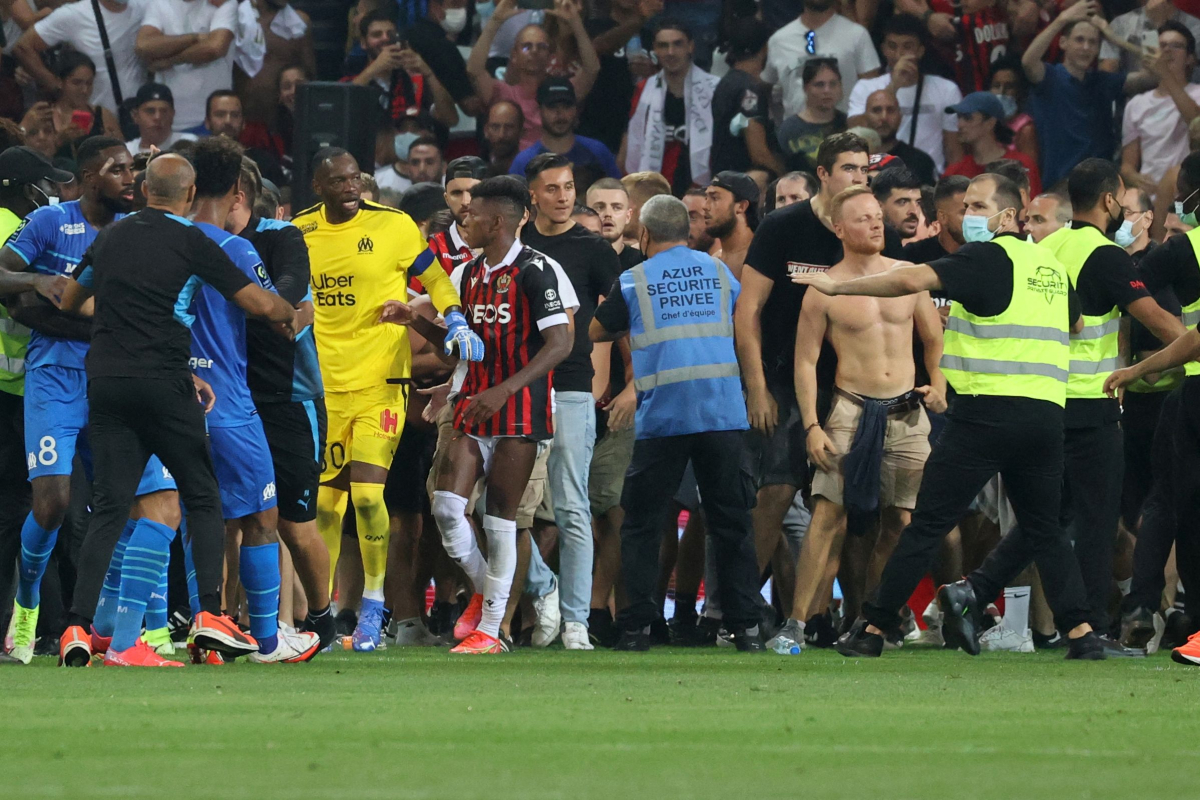