Today’s Grand Prix was everything an F1 race should be: overtaking, tire strategies, close calls. Exciting. Wonderful. Unless you’re a fan of poor, beleaguered Daniel Riccardo.

Despite a beautiful qualifying session, where he earned the coveted Pole Position at the last minute, Daniel Ricciardo was yet again left with a DNR for the Mexico GP. Daniel has the most DNRs in fact. Sadly, eight this season.

After several laps fighting off a charging Vettel with fresh tires, Daniel was overtaken on the straight by the raw power of the Ferrari. Unwilling to give up, Ricciardo fought on for his place on the podium. Ahead, Hamilton was struggling with a worn set of tires. Going into the turn, Hamilton locked up and ran off track into the grass. (That was a heart-stopping moment for Hamilton and Vettel fans alike, though for very different reasons.)

Daniel seemed certain to be set for a podium finish. Then, Lap 60. Sudden smoke erupting from Ricciardo’s Redbull sent his hopes, and those of his fans, up in flames. Yet another DNF, through no fault of his own, with his car failing. Being so close to the finish, (11 laps to go) it was truly heartbreaking to watch, and begs the question of why is it always Daniel’s car that fails. (Anyone still wondering why Daniel elected to switch teams after this season must have now put all doubts to rest. Even if his new team finds him finishing in the lower half of the grid, well – at least he’ll actually finish.)

Daniel’s retirement left the way clear for Vettel to chase down a now cautious Max Verstappen without the worry of a hard driving Aussie in his mirror. Verstappen led the race from the outset, pulling off a brilliant move to take the lead in the opening lap, fending off Hamilton’s surging start past pole-sitter Ricciardo. Vettel needed the win to keep his championship hopes alive. But, even with the blinding speed of his Ferrari, and Daniel’s exit leaving the way clear, there just weren’t enough laps left for Vettel to catch up and take the win.

Instead, Vettel finished second and Raikkonen third. A great result for Ferrari, giving the team a well-earned double podium finish. However, despite that both drivers on the podium, I’m sure there were several broken hearts among the celebrants, even as the champagne poured and the trophies were admired. Vettel’s second place finish, combined with Hamilton’s 4th place finish, was just not enough

to keep Sebastian in the running for the Fight for Five.

Lewis Hamilton was officially named this season’s points champion after the checkered flag. Sebastian, though certainly disappointed, showed true sportsmanship and took time from his post race interview to acknowledge the champion, offering congratulations to his respected rival with grace. While this season’s title race is over, two great races yet remain on the calendar, and I, for one, will be avidly watching.

And, honestly, I can’t wait for next season, to see how Daniel Ricciardo may fare with his new team. 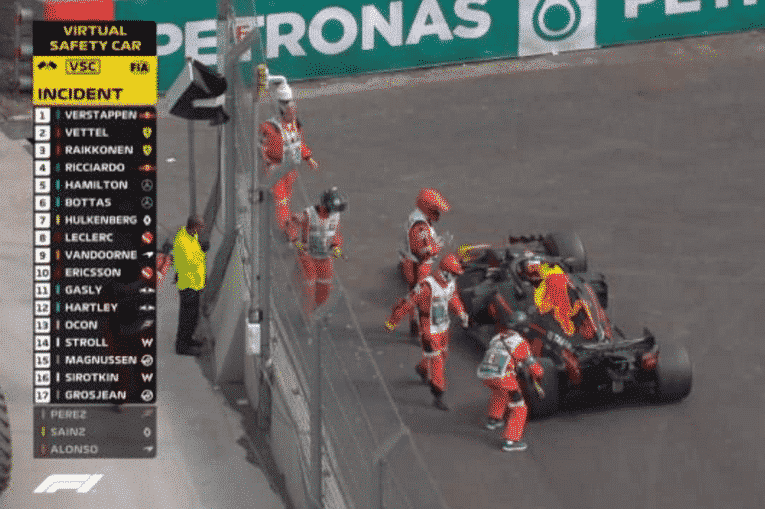