The Miami Heat continued their three-game road trip as they traveled to Canada to face the NBA Champion Toronto Raptors. Heading into this game, Miami and Toronto, along with Boston and Philadelphia remain as the only teams to remain undefeated on their homecourts. The Heat would be without Goran Dragic due to injury.

Pascal Siakam and Marc Gasol got Toronto on the board with a basket, two free throws, and a three-pointer respectively, while Bam Adebayo and rookie Kendrick Nunn got Miami’s offense going with a basket and a layup. After a basket from Meyers Leonard and a three-pointer from Duncan Robinson to put Miami ahead, Gasol tied the game at 9 with a basket for Toronto. The Raptors would tie the game again with a three-pointer from Fred VanVleet, followed by giving them the lead with another three-pointer. Both teams traded the lead in the early going before Miami led 21 to 19 after a Toronto timeout after the Heat went on a ten to two run. Siakam ended the run with two free throws for the Raptors, only for Miami to answer back with baskets from Kelly Olynyk, Jimmy Butler, and Justise Winslow. By the end of the first quarter, Miami led 32 to 23.

Rondae Hollis-Jefferson knocked down a jump shot for Toronto in the second quarter, followed by a layup from Serge Ibaka. Miami would see Winslow and rookie Tyler Herro make a layup each, plus a technical free throw from the latter, but Toronto came back with a three-pointer from Ibaka a layup from Hollis-Jefferson, and a fast break dunk from Norman Powell. With Miami ahead 40-36, Nunn and Adebayo looked to keep Miami ahead, but Toronto continued to chip away at their lead with baskets from Siakam, Terence Davis, and a three-pointer from Gasol. With Miami leading 44 to 43, they closed the second quarter on a fourteen to ten run, led by Adebayo, Butler and Kelly Olynyk. By halftime, the Heat led 58 to 53.

In the third quarter, OG Anunoby and Siakam led Toronto on a seven to nothing run, giving them a slight lead before a trio of three-pointers from Butler, Robinson, and Meyers Leonard, along with a dunk from Adebayo would put Miami in front 69 to 62. Adebayo and Butler added more to Miami’s lead with two free throws and a reverse layup, while Toronto answered back with three-pointers from Powell and Ibaka. With the Heat leading 80 to 73, the Raptors went on an eight to three run to close the third quarter with Miami holding an 83 to 81 lead.

As the fourth quarter commenced, Derrick Jones Jr. and Olynyk each made a three-point play for Miami, while Toronto responded with a basket from Ibaka plus a layup and free throws from Kyle Lowry. After a free throw from Ibaka and a layup from Powell, Winslow made a couple of shots for Miami, keeping them in front with an 98 to 90 lead. Powell and Lowry would take over on the offensive end for Toronto, while Olynyk and Nunn were doing the same for Miami. With the Heat leading 105 to 97, the Raptors went on an eleven to two run, looking to keep their undefeated record at home in tact, but a late foul sent Butler to the line, giving Miami a chance to put the game away. Butler would make a free throw to tie the game at 108, and would try to win the game with a buzzer beater, but to no avail as both teams were tied at 108 by the end of regulation play.

In overtime, Butler got off to a hot start, leading Miami on an eight to nothing run before free throws from Powell ended the run. The Heat quickly responded with a layup from Adebayo and a three-pointer from Olynyk as Miami would go on to win 121 to 110 over Toronto.

Another intense game that came down the stretch and then some. The Raptors went on a late run in the fourth quarter, but it would be the heroics of Jimmy Butler and the Heat’s defense that would propel them into overtime and making a big jump thereafter. The Heat made 76 percent from the free throw line, 39.5 percent from the three-point line, and 45.5 percent from the field. With this win, Miami gives Toronto their first loss at home, not to mention that both teams now have the same record of fifteen wins and five losses.

For the Heat, Duncan Robinson made 22 points, Bam Adebayo had 18 points, Justise Winslow with 17 points, Kelly Olynyk made 16 points, and Jimmy Butler with a triple-double of 22 points, 13 rebounds, and 12 assists.

For the Raptors, Norman Powell led the way with 23 points, Fred VanVleet had 19 points, Marc Gasol made 14 points, plus Pascal Siakam and Kyle Lowry were in double-double figures. Siakam with 15 points and 12 rebounds. Lowry with 12 points and 11 assists.

The Heat end their three-game road trip as they face another top team in the East in the Boston Celtics. Game starts tomorrow at 7:30pm and will be televised on Sun Sports. 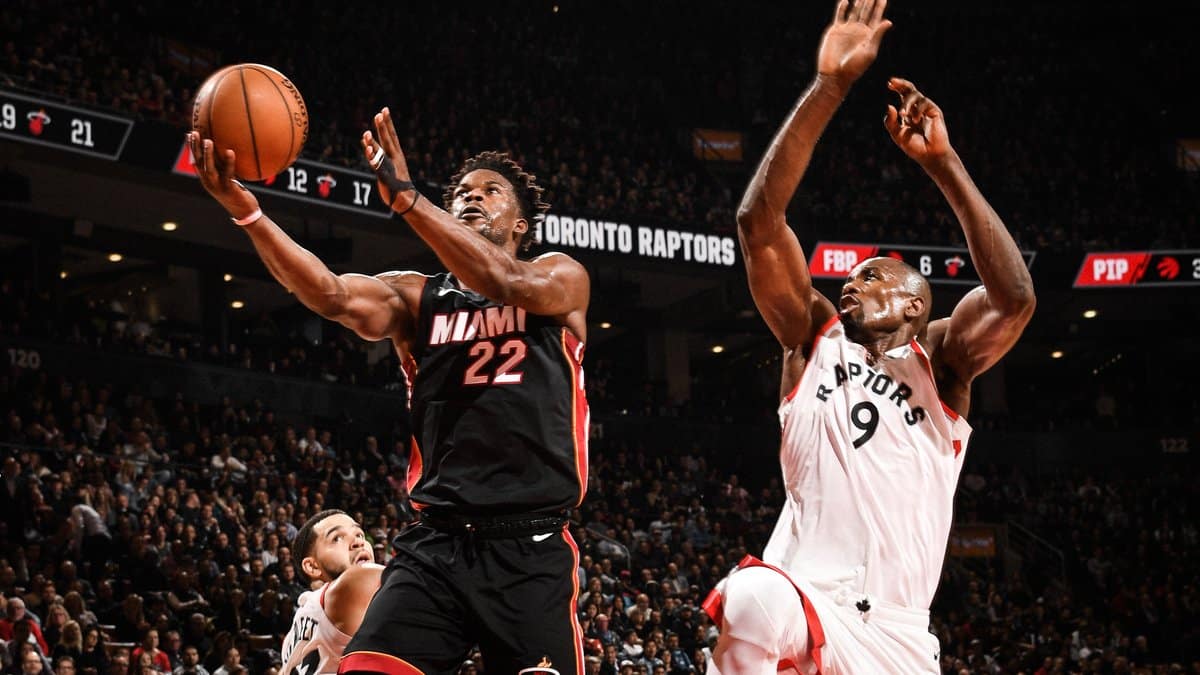