After dropping a tough game against the Memphis Grizzlies, the Miami Heat looked to end their three-game road trip on a high note as they faced the Philadelphia 76ers. In their last game, the Heat were blown out by the Sixers, which also saw Jimmy Butler deal with a hostile crowd. Heading into this game, the Heat are once again without Goran Dragic and Justise Winslow, both of whom are sitting out due to injuries, James Johnson on personal leave, and Dion Waiters serving another suspension.

Joel Embiid and Ben Simmons got the Sixers on the board quickly with their baskets and free throws, while Bam Adebayo and Jimmy Butler did the same for Miami. After a three-pointer from Al Horford, Philadelphia led 11 to 8. Tobias Harris kept the Sixers in front with a dunk, but Adebayo made two free throws to bring the Heat within three as Philadelphia led 13 to 10. The Sixers went on a fourteen to three run, led by Simmons, Horford, and rookie Matisse Thybulle, only for it to end with a layup from Kelly Olynyk. After Adebayo and rookie Kendrick Nunn made a layup each for Miami, Simmons and Raul Neto made free throws each for the Sixers. By the end of the first quarter, Philadelphia led 29 to 19.

Adebayo and rookie Tyler Herro picked up the offense for Miami in the second quarter, while Furkan Korkmaz knocked down a three-pointer for the Sixers, followed by Harris and Josh Richardson making layups and jump shots. With Philadelphia leading 41 to 29,  the Heat would close the second quarter on a twenty-seven to eight run as they would take a 56 to 48 lead by halftime.

In the third quarter, Embiid and Richardson got the Sixers going with a few baskets, plus a layup from Horford, while Duncan Robinson and Meyers Leonard knocked down a three-pointer each for Miami. Adebayo and Nunn kept Miami out in front with a few baskets, giving them a 71 to 62 lead. The Sixers went on an eight to three run, only for the Heat to answer back with a free throw from Adebayo and a three-pointer from Nunn. By the end of the third quarter, Miami led 82 to 74.

As the fourth quarter commenced, the Heat continued their scoring run, before Simmons made a basket to end it. Adebayo, Robinson, and Derrick Jones Jr. kept Miami ahead of Philadelphia with an 96 to 80 lead. The Sixers would go on a nineteen to five run, but a costly foul would send Butler to the line, who would make two free throws. Harris would sink a three-pointer to keep Philadelphia in the game, but another pair of free throws, this time from Adebayo, would seal the game for Miami in a 108 to 104 win.

The Heat came up big in the closing moments of the game, showing their tenacity with their rebounding and defense. Miami went on a series of runs between the second and third quarter, along with their defense and rebounding, which were vital for the Heat to secure the victory. Miami ended the Sixers’ undefeated streak at home at 14, while also heading into second place in the Eastern Conference standings.

For the Heat, Kendrick Nunn led the way with 26 points, Bam Adebayo made 23 points, Duncan Robinson had 15 points, Jimmy Butler with 14 points, and Derrick Jones Jr. made 13 points.

For the Sixers, Tobias Harris had 20 points, Josh Richardson and Ben Simmons made 17 points each, and Joel Embiid with a double-double of 22 points and 19 rebounds.

The Heat return home as they take on the New York Knicks. Game starts Friday at 8pm and will be televised on Sun Sports. 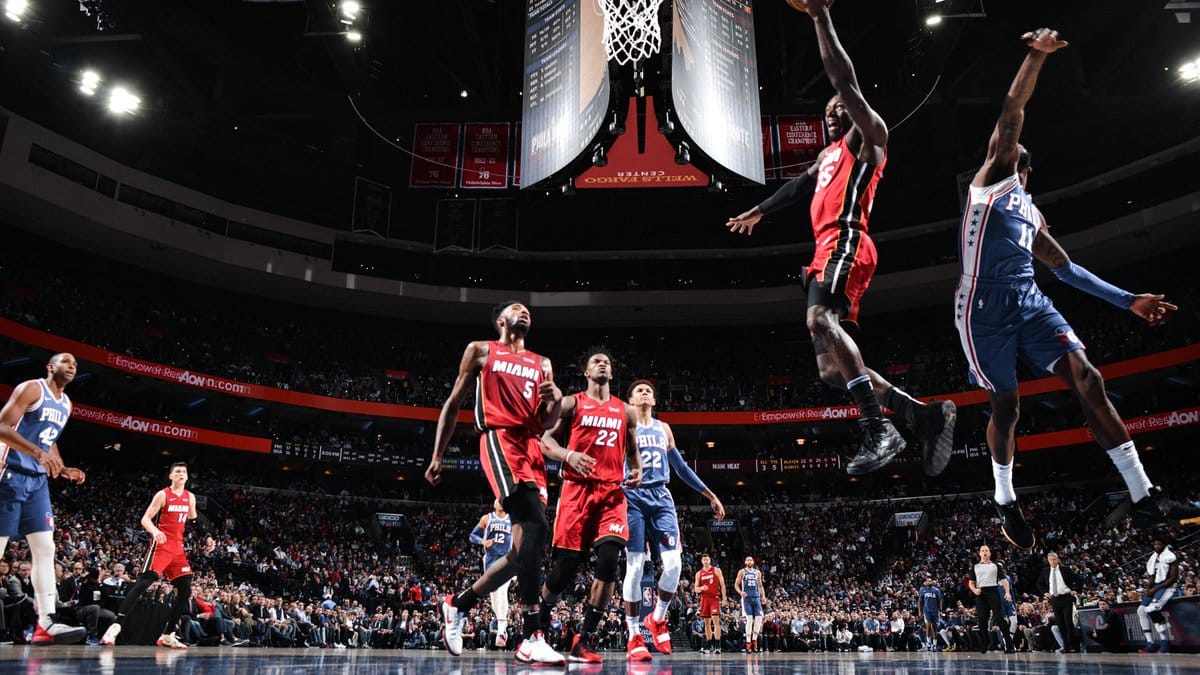