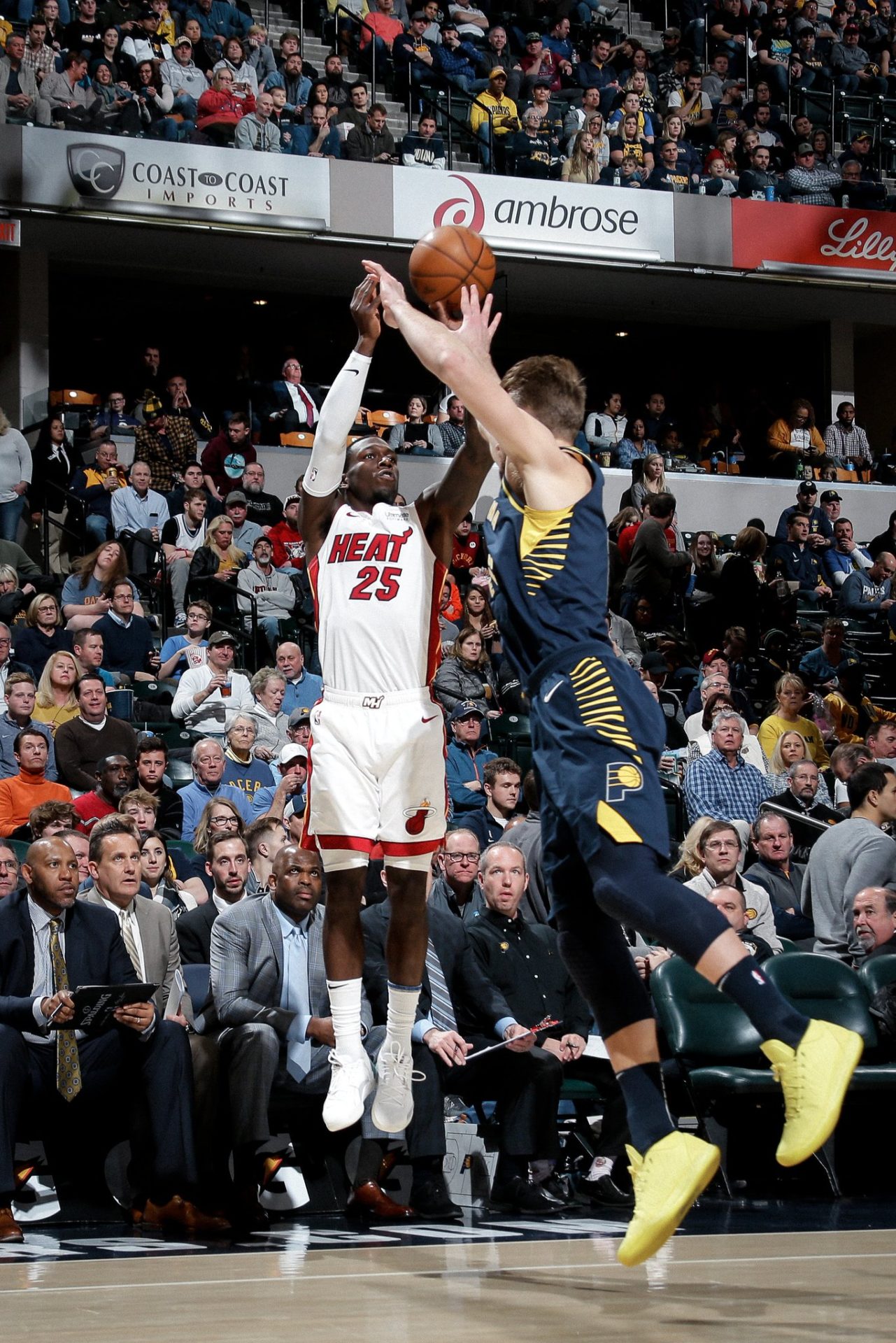 The Miami Heat embarked on another road trip, with their first stop at Bankers Fieldhouse Arena against the Indiana Pacers. In their last game, the Heat held on in the closing moments of the contest, garnering them a 112 to 111 victory. Heading into this game, Justise Winslow, who missed 15 games due to back injury, returned back to the roster, while the Pacers were without Malcolm Brogdon and Victor Oladipo, who would make his season debut on January 29 against the Chicago Bulls.

Domantas Sabonis and Myles Turner got Indiana rolling with a basket and a three-pointer, while Bam Adebayo and Meyers Leonard would do the same for Miami. After a layup and two free throws from TJ Warren, the Heat answered back with a pair of layups from rookie Kendrick Nunn and a basket from Adebayo, leading to a fourteen to four run. With Miami leading 19 to 11,  Sabonis and Turner made a few baskets for the Pacers, while Nunn and Derrick Jones Jr. did the same for the Heat. After a layup from Aaron Holiday, Miami led 23 to 19. The Heat closed the first quarter on an eight to four run, giving them a 31 to 23 lead.

After a three-pointer from rookie Tyler Herro to open the second quarter for Miami, Indiana went on a seven to nothing run, only for Herro to end it with another three-pointer. After a free throw from Goran Dragic, Indiana responded with a basket from Sabonis and a layup from Edmond Sumner. Jones Jr. would make a three-pointer, only for Sabonis to make one for Indiana in return as Miami led 41 to 37. After a layup from Dragic and a three-pointer from Herro, the Pacers responded with two free throws from Sumner and a layup from TJ McConnell. Miami kept scoring as Butler, Adebayo, and Dragic gave the Heat a 53 to 45 lead. Miami would end the second quarter on a twelve to four run, giving them a 62 to 49 lead.

In the third quarter, Nunn knocked down a three-pointer, followed by a dunk from Adebayo, giving Miami a 67 to 49 lead. After a three-pointer from Duncan Robinson, Sabonis and Jeremy Lamb got Indiana going with a basket and a three-pointer respectively. Nunn would get to the free throw line for Miami to make three free throws, but only making two out of the three attempts. The action stopped as an altercation between Butler and Warren unfurled, in which Warren wrapped up Butler and slung him around, leading to a heated exchange of words. Seconds thereafter, Warren would be ejected from the game after taunting Butler, who had picked up a foul. This led to Miami scoring at a frenzied pace against the Pacers well into the closing moments of the third. Miami led 100 to 72.

As the fourth quarter commenced, Dragic and Holiday each made a three-pointer for Miami and Indiana respectively, while McConnell went for a layup and Sabonis delivering a slam dunk for the Pacers. With Miami leading 103 to 79, the Pacers were on a thirteen to four run, before Herro ended it with a pair of three-pointers. With Miami ahead 112 to 85, Indiana went on an eight to one run, but once again, Herro knocked down another three-pointer to end the run. As the Heat led 118 to 97, Indiana went on an eleven to four run, but it would be Miami who would go on to win 122 to 108.

The Heat had something to prove when it came to handling their business on the road, and they did so against the Pacers in dominate fashion, thanks to Heat coach Erik Spolestra telling them that they were a “mediocre road team,” and that they needed to be challenged. Miami stifled Indiana on the defensive end, but it was their explosive and blistering surge in the third quarter that hanged the course of the game, the confrontation between Jimmy Butler and TJ Warren withstanding. The Heat are now 8-0 against teams from the Central Division. Miami are also now in second place in the Eastern Conference and now has the third best record in the league.

For the Heat, Tyler Herro had 19 points, Bam Adebayo and Derrick Jones Jr. made 18 points each, Duncan Robinson with 17 points, Goran Dragic made 15 points, and Jimmy Butler with 14 points.

For the Pacers, Aaron Holiday and Justin Holiday made 14 points each, Edmond Sumner and Jeremy Lamb with 13 points each, and Domantas Sabonis with a double-double of 27 points and 14 rebounds.

The Heat continue their road trip as they head to the Barclays Center to face the Brooklyn Nets. Game starts Friday at 7:30pm and will be televised on Sun Sports.

has published a new post."Wrestlemania 36 Preview - Too Big for One Night"
1 day ago