David  Stern was a man of many innovations during his time as commissioner of the NBA. Stern was someone with a keen sense of creating unique opportunities and breaking barriers. When he assumed the role of overseeing the NBA in 1984, many would not have envisioned how he would take the league to new heights and beyond.

During Stern’s time as commissioner in the NBA, we would not only see players such as Michael Jordan, Charles Barkley, Hakeem Olajuwon, and Shaquille O’Neal become larger than life figures with an increasing amount of influence, but the league expanding with emerging teams like the Charlotte Hornets, Miami Heat, Orlando Magic, and Minnesota Timberwolves in 1988 and 1989. It would be during the 1990s, where the NBA would surge in popularity, thanks to the rise of the Chicago Bulls winning six NBA championships and a high number of players being promoted as brands, thanks to sponsorships like Nike and Gatorade.

Perhaps Stern’s biggest achievements was expanding beyond the NBA. It was Stern who would bring the NBA on a global scale, bringing exhibition games to China, Japan, Russia, which also led to international talents making their way to the NBA to create their own success. In addition, the NBA’s global expansion led to the introduction of two Canadian teams, the Toronto Raptors and the Vancouver Grizzlies, the latter now playing in Memphis. Stern would also be the founder of the WNBA, providing a showcase for women’s basketball, and Basketball Without Borders in conjunction with FIBA, where basketball camps are held throughout the world in an effort to spread the influence and love of the game of basketball.

David Stern left an indelible mark not just on the world of basketball, but the entire sports world altogether. The contributions and philantrophy are just part of that legacy. For 30 years, Stern has presided over the NBA, turning it into more than just a league and the sport of basketball into more than just a game. A platform for influence and knowledge that now spans over the entire globe. We can never thank David Stern for what he has done for the NBA and basketball altogether. Thank you, David Stern, for all that you have created and accomplished. 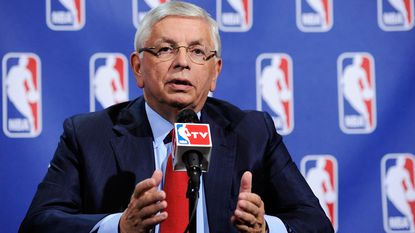