Early April can be seen as a time of great awakening from the long and cold winter. It is in this same time that baseball returns from Spring Training ready to make it count.

Hopes are high at the onset of the new year as free agents take the home field for the first time, ready to put the first results in the books. Some of the players to watch include a retooled San Diego Padres team led by James Shields on the mound backed up by an outfield of Justin Upton, Matt Kemp, and Will Myers.

Elsewhere, in Chicago the two clubs of the “Windy City” have emerged to the forefront of the league with the north sided Cubs signing a new manager to take charge of their extensive young talent, and a new pitching ace in John Lester.

On the south side the White Sox have added pitching depth with Jeff Samardzija and David Robertson with an additional bat in Melky Cabrera. On the East Coast, Alex Rodriguez returns from a year-long P.E.D. suspension and Max Scherzer will try to live up to his $210 million deal for the Nationals in the nation’s capital. All of these questions have begun to be answered today.

Set up by a 3-0 win for the Cardinals over the Cubs last night the day started in New York as the Yankees took on the Blue Jays, and Yankee fans may wish it didn’t. In his second season, Yankee pitcher Masahiro Tanaka wanted to get off to a good start but found the opposite result.

The Blue Jays clobbered him for five runs in just four innings until Tanaka was removed from the game. Another big story of the day was the return of Alex Rodriguez, who went 1 for 2 with a single and a walk and was cheered by the Yankee Stadium faithful. Toronto on the other hand, coasted to a 6-1 victory with home runs by Edwin Encarnacion and Devin Travis. Overall, a disappointment in the Bronx.

Elsewhere in the majors, the Tigers started their season with a strong 4-0 win over the Twins in Detroit and with another shutout the Rockies beat the Brewers 10-0 in Denver. In arguably the two most anticipated match ups of the day were the clashes between the Mets and Nationals and a Southern California clash of the Dodgers and Padres in Chavez Ravine. First, the Mets spoiled the welcome party for Max Scherzer at Nationals Park with a big day for Lucas Duda of New York. On the other coast, the Dodgers used a late inning rally to top their San Diego rivals 6-3.

Not to be forgotten the Red Sox hit three home runs including a grand slam from Hanley Ramirez to beat the Phillies at Citizens Bank Park. This comes as no surprise as Philadelphia starts the year fielding one of their weakest teams in recent memory,

Like any Opening Day, today has provided a spark to the MLB season. Questions and story lines which started in the winter will continue to carry out while others are added all culminating in a champion at the World Series in October. Until then, baseball has awakened and with the games now counting, the arduous pursuit will have teams jostling until the final day of the season. 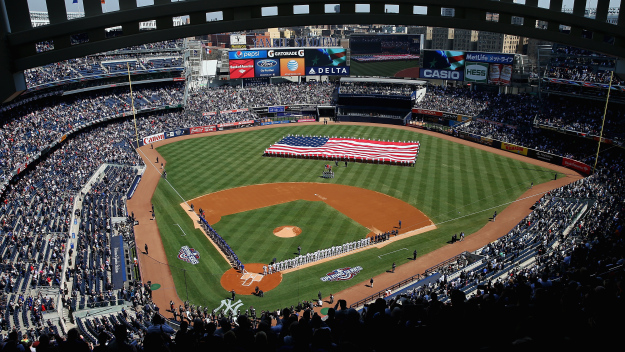