Rudy Gobert has been elected DPOY of the 2021-2020 season, it is the third DPOY Trophy of his career after winning this award for two years running in 2018 and 2019. He is now joining players like Dikembe Mutombo (4x DPOY), Ben Wallace (4x DPOY) and Dwight Howard (3x DPOY) who won at least 3 Defensive Player of the Year trophies.

Utah’s French center had a really good season since he compiled 10.1 defensive rebounds per game, 960 rebounds, 2.7 blocks per game and the Jazz have also the best defensive rating in the NBA. After receiving his award Gobert declared :

“It is incredible! When I was a kid and I started to play Basketball, I would never believe to be DPOY and now I won it 3 times. I am trying to write my own story, appreciating my life, but be one of the four guys who won that much times this award is just incredible.”

Utah’s Center won this honor with a pretty big advance compared to Ben Simmons and Draymond Green, the two other contenders for the trophy. Rudy Gobert won with 464 points, Ben Simmons, far behind with 287 points and Draymond Green obtaining only 76 points. Now the only trophy that Rudy Gobert wants to win is the Larry O’Brien Trophy, the most important title to win in the NBA.

“I want to win a championship title. When I was drafted by the Jazz 8 years ago, I told myself that I wanted to do anything to win the first title in the history of the franchise.”

Nikola Jokic received his first Most Valuable Player trophy: this is the first time that a Denver Nuggets’ player receives this honors in the franchise history. Nikola Jokic also becomes the third European player to be MVP after Dirk Nowitski and Giannis Antetokunmpo. The Denver Nuggets’ center is therefore writing his name in the history books after being the lowest drafted player to win the MVP Award. Let’s not forget he had been selected in 41st place in the 2014 NBA Draft.

The Serbian had an incredible season: he averaged 26.4 points, 10.8 rebounds, 8.3 assists and 1.3 steals. He is rightfully honoured after having a great season personally and also with his team as the Nuggets finished at the third seed in the Western Conference. Nikola Jokic received 971 total points, not to mention that he collected 91 first-place votes. Joel Embid, Philadelphia 76ers’ center finished at second place with 586 points, Stephen Curry is completing the podium with 453 points.

In his sixth season, the Serbian is revolutionising the position of center in the game. He is almost playing as a guard with his high-quality passing game, he is also able to do almost everything offensively.

However, after playing in the Western Conference Final last year, Jokic and the Nuggets will try to do better even though they are down 2-0 against the Phoenix Suns. Can Nikola Jokic help his team to win the third match, and perhaps turn around the series? 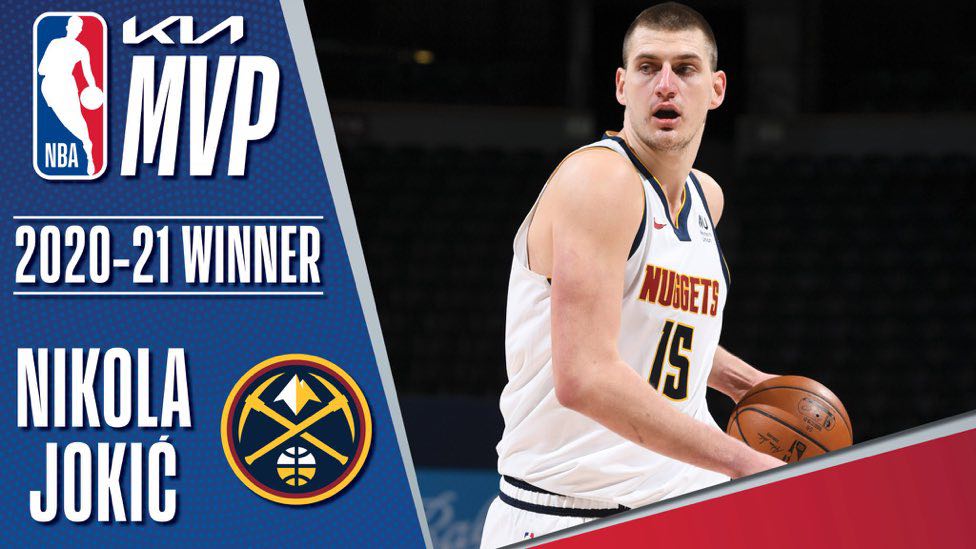