The New York Giants have made a massive statement to the rest of the NFL by spending big on the first official day of free agency.

The New York Giants Splash the Cash and have made a massive statement to the rest of the NFL by splashing the cash on the first official day of free agency business started on a high as earlier in the day it was revealed that defensive end Jason Pierre-Paul would be signing a new one year contract to remain with the Giants.

Pierre-Paul will reportedly earn $10million during his contract. On the surface this is a good deal financially for the Giants given JPP’s pass rushing abilities.

The contract is only a one year deal due to JPP’s hand injury problems which seemed to effect his game last season as he ended the season with just one sack.

It is hoped that a recent procedure will allow Pierre-Paul to have more movement in the hand he injured during 4th July Celebrations last year.

The first new addition to the roster was made in the form of former LA Rams cornerback Janoris Jenkins on a 5 year contract worth around $62million.

This move does seem to mean that General manager Jerry Reece is happy to let the man who filled that role last season Prince Amukamara leave through free agency.

The Giants had an awful defensive record last term and were ranked bottom of the NFL defending against the pass and this addition will no doubt go some way to improving that record.

This was only the start of the defensive shake up. Jerry Reece also managed to secure the services of defensive tackle Damon Harrison from city rivals New York Jets.

Harrison is expected to line up alongside the impressive Jonathan Hankins on the inside of the the defensive line. The former Jets man has signed a five year deal worth around $9million a year.

He has had an excellent career in the NFL so far since signing for the Jets after being an un drafted free agent back in 2012. Harrison has a very good reputation when it comes to defending against the run and last season managed to register 39 solo tackles, a new career high.

The last move made by the Giants on the first day would also be by far the biggest. They completed a stunning move to sign pass rushing defensive end Olivier Vernon, formerly of the Miami Dolphins.

Vernon’s deal is worth a staggering $85million over the five years, with $52.5million guaranteed. The deal is one of the biggest in NFL history and is now earning more than Houston Texans superstar defensive end JJ Watt.

The Giants have certainly then a massive gamble by taking Vernon, especially when you consider that he averages only 7 sacks a season in the NFL. However it is one that they probably had to take given they have a distinct lack of pass rushers on their current roster and Vernon was the best available through free agency.

It is impossible to say whether the Giants gamble on going big in free agency will pay off until the season gets underway in September. It is however unquestionable that on paper at least their defence looks a lot stronger now than it did during the previous season. 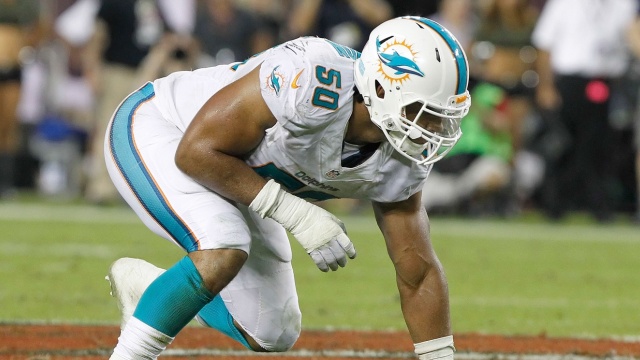