After a long-drawn-out process, Newcastle finally looks set to appoint their man to lead them forward. Whilst on paper Eddie Howe seems to be a very credible candidate to take the Newcastle hot seat, it leaves the question as to whether he was their first choice to replace the departing Steve Bruce.

Eddie Howe is currently out of a job having left Bournemouth back in 2020 having enjoyed a mostly successful tenure at ‘The Cherries’. However, the end of his reign was less fruitful having left the club when found themselves in the bottom three of the Premier League come to the end of the 2019/20 season.

Despite the high levels of experience, Eddie Howe has in managing in the Premier League, from the reports it doesn’t seem he was the first choice on the list of managers Newcastle’s new owners desired. With talks faltering between a number of high profile managers such as Paolo Fonseca and Unai Emery as well as links with Lucien Favre and Frank Lampard, Newcastle is firmly focusing their attention on the former Bournemouth manager.

Whilst Eddie Howe is seemingly destined to be the next man to take the next position as Newcastle manager, there seem to be some doubts about his appointment from some of the new owners.

For starters, Howe looks set to ask for a number of his former backroom staff to be appointed alongside him including his former assistant manager Jason Tindal as he wants ‘familiarity’ around him at the club. As well as this the Saudi-led consortium is also concerned with the fact Eddie Howe led Bournemouth to relegation back in the 2019/20 season.

Firstly, despite Eddie Howe’s demand of wanting to bring in his own backroom staff, he must not forget of the familiarity he has around ‘The Magpies’ currently, with the likes of Ryan Fraser, Callum Wilson, and Matt Ritchie at the club who he has previously worked with.

Secondly, Newcastle should be wary and take their time with the appointment of their next manager as they are precariously sitting in the bottom three having yet to pick up their first win of the season even though we are already in November. The fact that Eddie Howe’s last act as a manager was taking Bournemouth back down to the Championship makes it understandable the Saudi-led consortium is taking their time in appointing the former ‘Cherries’ boss.

Should Eddie Howe be appointed?

On the whole Eddie Howe appears to be the right man to lead ‘The Magpies’ forward and a perfect fit for what they need for the next six to eighteen months. With 5 years of Premier League experience behind him, overall Eddie Howe did a very commendable job as Bournemouth manager. Especially considering the fact he was on a limited budget and couldn’t always bring in the necessary players into the club he desired.

That problem is automatically eradicated due to the vast war chest of money he will have available to spend in the January window to help build the current squad in order to scurry their way out of a relegation battle. With the likes of James Tarkowski from Burnley and Luis Díaz from Porto rumored to be just a couple of their January acquisitions, Howe will have a much stronger budget than the one he had at Bournemouth.

Finally, on top of his Premier League experience and wider available budget than previous clubs, the fact that he is still only 43 years old must make ‘The Geordies’ relish the appointment of Howe due to the fact there is still room for him to grow as a manager in the top flight of English football. 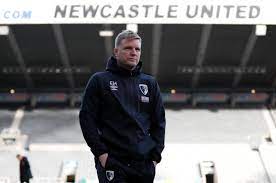