The NFC East is ready to reclaim its dignity. Over the last few months, I have been grading both the AFC and NFC teams off of their draft selections and free agency. I have evaluated both the most improved teams and the impact that these improvements have had on some of the veterans already on these teams. Now’s the time to see how each improved team stacks up against their divisional rivals, and to make some way too early predictions.

Over the course of the next few weeks, I will be breaking down each division and take a shot at ranking the teams in them. Without further ado, I present the NFC East, last year’s weakest division. Let’s see how the Dallas Cowboys, Philadelphia Eagles, New York Giants, and Washington Football Team stack up against each other.

The NFC East has a lot to prove this season, after the doozey they gave us last year. for those who don’t remember, the Washington Football Team clinched this division at the record of 7-9 last season. Everyone needs to improve, and for the most part, all of them did. But was it enough? Do any of them pose an actual threat to the rest of the league? Who is going to rise to the challenge of the 2021 NFL season and beyond?

Dak is back! And all of the reports are leading us to believe that he is 100% recovered from that awful ankle injury. If this is true, the Cowboys’ offense should pick up where it left off when Presscott’s season was abruptly cut short. And if that’s the case they will be leading the league in total offense before too long. After all, Dak was out for over a week, before any other QB was able to catch up to the numbers he was posting.

There aren’t many notable upgrades to the offense since the Cowboys poured their offseason efforts into the defense. With that said they retain Amari Cooper, CeeDee Lamb, Michael Gallop, Ezekiel Elliot, and Tony Pollard. The offensive line also remains mostly intact, so if Dak truly is healthy there should be no concern that Dallas will put up plenty of points. They still have the best offense in the division if not the NFL.

The Cowboys hit their defense hard in both the draft and free agency. The most notable of these selections was the selection of Micah Parsons with their first overall pick in the NFL draft. Parsons is the complete package at LB. Hard-hitting, fast, great recovery speed, excellent vision, and a non-stop engine. Any defense he joins is already improved.

They didn’t just take Parsons in the draft, however, as Dallas devoted most of their draft to beefing up the defense. Kelvin Joseph, Osa Odighizuwa, and were amongst the players they selected, though no one is really expected to make an immediate impact.

The most notable additions in free agency were to the Dallas secondary. Keanu Neal and Damontae Kazee were both brought over from the Falcons. Neal is in the process of being converted into an LB/S hybrid, a position that has seen some increase in popularity the last few seasons. Neal and Parson join a talented LB core that already includes Vander Esch and Smith.

Even with all of these upgrades, I still don’t think it’s enough. Don’t get me wrong, this defense is no longer the dumpster fire that it was a year ago, but it still isn’t good. It’s going to take a while to get this unit back to a respectable level. They are much better, but they still have the worst defense in the division and are at best in the lower one-third of the NFL.

The table has been set for Daniel Jones, now it is just a matter of seeing whether or not he is the Giants’ future. He now has a number one target in Kenny Golladay and plenty more weapons on offense. They drafted WR Kadarius Toney and added WR John Ross and TE Kyle Rudolph in free agency. They join an already talented set of weapons which include Shepherd, Slayton, and Engram.

New York also added a talented backup RB in Devontae Booker, just in case Saquon Barkley doesn’t come back strong from injury. The Giants also made some additions to their OL, however, on paper, none of them give that line the drastic improvement they needed. New York merely hopes they can find a combination of lineman that is greater than the sum on their parts.

Ultimately, though I am no completely sold on Danny Dimes, Saquon’s health or that line, this offense might still be respectable. Still probably only the third-best in the division.

This defense started to come on in the second half of the season last year and managed to improve it even further in the off-season. The defensive line did lose Dalvin Tomlinson to the Vikings, but they added a piece that they actually were lacking last year: a dynamic EDR. In the second round of the draft, they added Azeez Ojulari to fulfill that need. He joins Leonard Williams as a force to be reckoned with.

The second level of the defense also saw improvement when LB Reggie Ragland was brought in through free agency to join Martinez. In the secondary, Logan Ryan has transitioned from CB to S in order to make room for Adoree Jackson who comes over in free agency.

Overall, this strong defense was improved even more and can easily make a claim for a top ten defense. With that said, it will still only be second best in the division.

For better or for worse, the Eagles made it clear this off-season that Jalen Hurts was their QB when they traded Carson Wentz to the Colts. They then brought in Joe Flacco to back him up and be his mentor. They and several fantasy football experts who have Hurts projected in the top 10 clearly have seen something that I missed. He could be an amazing talent, but I personally haven’t seen enough one way or the other.

Another aspect of this offense that confuses me is the signing of Jordan Howard and the drafting of Kenneth Gainswell at RB. Having RB depth is a good thing, but the Gainswell move makes it seem like they are grooming their next starting RB when they already have a young Miles Sanders. Throw Boston Scott in the mix and there is much more confusion than improvement. That is unless they go with a San Fran style of RB committee.

The part of the offense where I’m not confused is the addition of Devonta Smith at WR. He joins a great set of passing game weapons which include Reagor, Fulgham, and Goedert.

If Hurts is the guy he has the tools to succeed, but the beginning part of the season is going to be a little rocky either way. There are too many question marks for me, however, so I am going to rate them last in the division.

As much as their offense confuses me, Philly’s defensive moves are clear. The unit should see improvement in the 2021 season. Their most notable addition was LB Eric Wilson who is coming over from the Vikings. He is coming off of a career year in which he filled in for the injured Barr and has earned the right to start alongside Alex Singleton. Very quietly, the Eagles assembled one of the better LB tandems in the league.

The addition of ER Ryan Kerrigan, and the fact that they stole him from their division rival in Washington, leaves much cause for celebration. He adds great rotational depth to a unit that already features Graham, Cox, Hargrave, Barnett, and Josh Sweat. This line is definitely going to cause problems for both opposing QBs and RBs.

Overall, this defense is going to be a very strong unit and might even help to win them some games this season. With that said, they are in a division with other top defenses, one of which will be historic. I have them ranked in a close third.

Fitzmagic is now gracing Washington with his services as he makes his tour around the NFL. Yes, I get it, Ryan Fitzpatrick is not an elite QB, heck, he’s not even a franchise QB. He is, however, an exciting and energetic QB who brings relevance to the team for whom he is playing. Relevance is something the Football Team’s offense sorely lacked last year. He will mix brilliant deep balls, long drives, and bad turnovers, but ultimately brings improvement.

Fitzmagic also doubles as a mentor for Washington’s young QB Taylor Heinicke, who may very well end up being their future.

They also gave Fitzmagic plenty of weapons to work with. In the draft, they added the speedy WR Dyami Brown. In free agency, they added versatile weapons in Curtis Samuel and Adam Humphries. They join a strong backfield that features RBs Antonio Gibson and JD McKissic, and one of the best young WRs in the game, Terry McLaurin. They even have a solid TE in Logan Thomas.

Washington will probably lose a few games on this offense turning the ball over, but when it’s clicking it is going to be dangerous. You can easily see this being a high-flying offense that makes up for many of its own mistakes. They are a legit O that is only second to Dallas in this division.

Barring a few injuries, this will be a historic defense. Period. I am so far beyond being rational on this one that you are better off leaving your opinion to yourself if you disagree. I feel more confident about this prediction than any other I have made this off-season.

It all starts with that returning front four. Chase Young, Jonathan Allen, Daron Payne, and Montez Sweat are the best front four in the league, hands down. And now they can play even more recklessly thanks to the improvements made in behind them. Rookie Jamin Davis provides a sideline-to-sideline LB who will clean up any mess that front 4 let’s slip by.

In their secondary, they added talented CB William Jackson and rotational talent Kendall Fuller. Add in rookie Benjamin St-Juste and to the returning Landon Collins and Kamren Curl and you have a set of DBs that will make opposing QBs pay for rushing the pass.

The truth is that this defense is strong on every level. They are strong at each individual position, and they even have depth. Losing a piece or two would hurt, but it wouldn’t stop this defense from being a top 5 defense. This defense will set records and has now begun its reign of terror. Best D in the division, best D in the NFL.

I don’t think that the NFC East will get more than one team into the playoffs this year, but it wouldn’t shock me if they snuck someone into the seventh sport. Either way, this division will be much more respectable than it was last year ad the division winner will have a record over .500.

Just a friendly reminder, any and every prediction I have made in this article is being made far too early. We need to see training camps,pre-season, and final cuts before we can really make any form of intelligent guesses. In keeping with this tradition, however, I will give you my final standings.

That’s all for now, tune in next time when I break down the AFC East.

Check out my NFC East episode from my J-MiL4Real Podcast 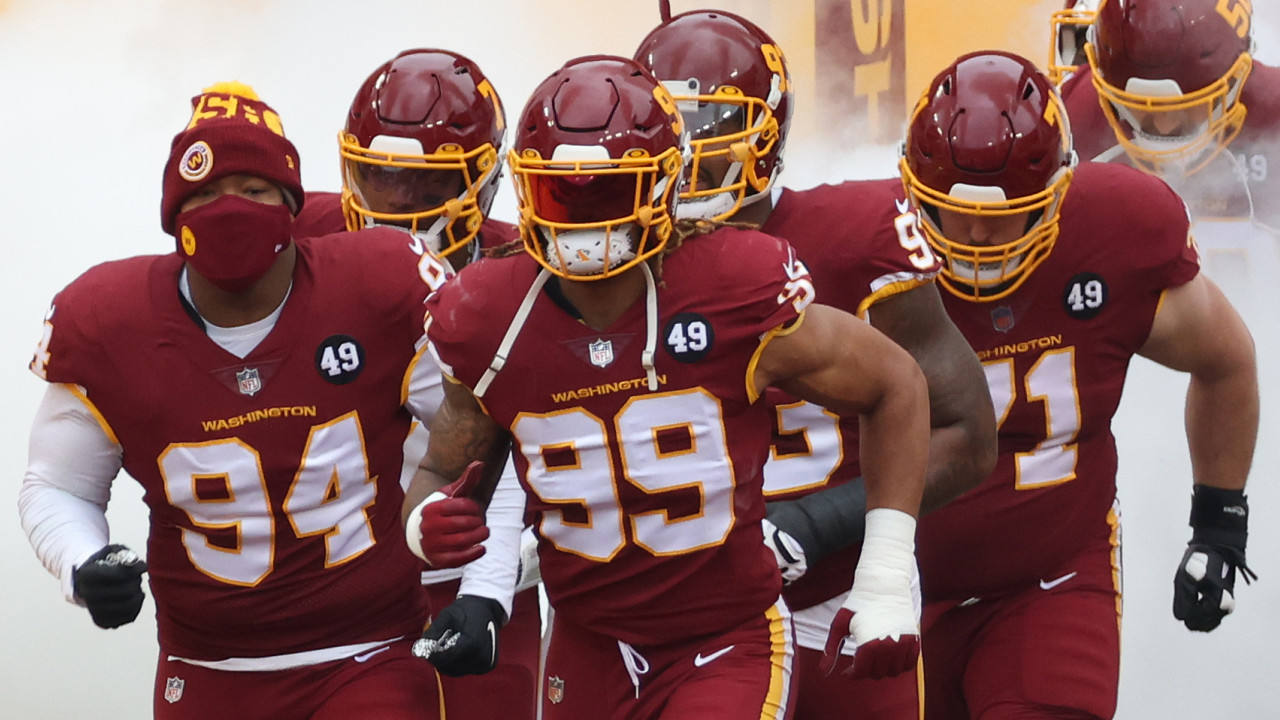