NFL Recap from Week 10 in the NFL

The Buccaneers return to dominance after being shut down last week. Tom Brady connected with eight different receivers, with three of them scoring touchdowns.

Brady also ran one in himself. Ronald Jones had 192 rushing yards and 198 all-purpose yards to pace all Tampa Bay weapons.

Midway through the third quarter, Ronald Jones broke the game wide open with an incredible 98-yard touchdown run to extend the Buccaneers lead to 26-17.

The very next series, the Panthers drive and hopes of winning were dashed with a clutch interception from Jason Pierre Paul.

Jason Pierre Paul put the icing on the cake later in the quarter when he tagged on the quarterback sack that knocked Panther QB Teddy Bridgewater out of the game.

The Buccaneers went on to route the Panthers 46-23

The first half of game featured two brilliant highlights as the Packers and Jaguars went back and forth. Aaron Rodgers threw a 78-yard touchdown pass to Marquez Valdes-Scantling for the Packers.

Keelan Cole returned a punt 91 yards for a Panthers score. Rodgers ran in another before halftime to give the Pack a 17-10 lead.

That lead was soon erased in the second half as the Jaguars took a 20-17 lead with great defense from Myles Jack and Keelan Cole’s second touchdown.

Then the Pack stormed back. At the beginning of the fourth quarter, they went on a drive that concluded with Rodgers second touchdown pass, this one to Devante Adams.

Later in the period, the game was finally put on ice when Rashan Gary and Preston Smith ended Jacksonville’s final drive with back to back sacks.

The Detroit Lions jumped out to a huge lead in this game, leading 24-3 halfway through the third quarter. Matthew Stafford was having a huge game, throwing for 3 touchdown passes while connecting with 9 different receivers.

D’Andre Swift was enjoying himself a breakout day as the lead back, piling up 149 all-purpose yards and a score of his own. The game could not have possibly gone better for Detroit.

The rally began, led Alex Smith, who should be named comeback player of the year. After a brutal injury, Smith had finally earned his first start in 728 days.

He led the team from Washington down the field not once, not twice, but three times. Each drive was capped off with a rushing touchdown, two of them by Antonio Gibson.

The Lions then broke the streak of 21 unanswered points with a field goal. Washington answered back, however, as Smith executed the two-minute drill perfectly.

The game was headed to overtime. Or was it. Sixteen seconds left on the clock: penalty, deep completion, timeout.

The Lions lined up for a 59-yard field and…IT’S GOOD.

Matthew Prater kicks for the 30-27 Lions victory over Washington.

The Giants came into this important NFC East showdown with something to prove, and that they did. Daniel Jones led the Giants both through the air and on the ground as they led throughout the game.

Jones threw for 244 yards and continued to show off his skills as a runner with 64 yards and a touchdown on the ground. Running back Wayne Gallman added another 2 touchdowns for the Giants rushing attack.

All of the scoring was over before the 4th quarter began, but the Giants didn’t really put the Eagles away until their final two drives.

Tight coverage from James Bradberry, strong tackling from Jabrill Peppers and a clutch quarterback sack on the Eagles final third down by Dexter Lawrence, all led to Philadelphia turning it over on downs their last two drives.

The Giants assert their relevance with a 27-17 win over the division leading Eagles.

This game featured two of the top rookie quarterbacks battling it out for supremacy as the Dolphins Tua Tagovailoa and the Chargers Justin Herbert squared off for the first time.

A blocked punt by Andrew Van Ginkel on the first series of the game gave Tua a short field for a quick score, but his second drive went an impressive 88 yards to give him his first of two touchdown passes.

Justin Herbert was eventually able to respond when Nick Vigil gave him a short field of his own, following a fumble recovery. On that drive, Herbert was able to pick up his first of two touchdown passes.

The two rookies went back and forth versus two defenses that were up for the challenge when the game finally broke open at the end of the third quarter.

The Dolphins were leading 20-14, but that Chargers were driving the field. Then, on the sixth play of the drive, the Fins defense finally got the better of Herbert.

Xavien Howard intercepted the pass and returned it to the Chargers 32 yard line.

Tua did not disappoint, turning the short field into his second touchdown just five plays later to give Miami a 26-14 lead.

The two teams traded one more score apiece to give the Dolphins a 29-21 win over the Chargers.

Josh Allen and the Buffalo Bills came out firing in this game, building a 23-9 lead early in the third quarter after a Dane Jackson forced fumble and fumble recovery. Then the game got interesting.

On the very next series, Kyler Murray led the Cardinals offense on an 85-yard drive, capping it off with a touchdown run of his own. Arizona whittled away more and eventually took a 26-23 lead on another Murray touchdown run.

This was set up by Patrick Peterson as he gave them a short field following an interception at the end of the third quarter.

The fourth quarter featured strong play by both defenses as they vied to give their offenses the upper hand. Eventually, the Cardinals defense cracked.

With less than a minute in the game, Allen capped off a twelve play drive with a touchdown pass to Stefon Diggs to secure a 20-26 lead! The Cardinals needed a miracle.

And a miracle they received. With just eleven seconds left on the clock, Murray evades a strong Buffalo pass rush and hurls a hail mary prayer into the end zone…and IT WAS CAUGHT on a leaping effort from Deandre Hopkins, staking his claim as the top receiver in the game.

The Cardinals pulled off the improbable upset over the Bills, 32-30.

The Steelers extended their streak of dominance, cruising their way to a huge victory and 9-0 record. Ben Roethlisberger spread 333 yards around to seven different receivers, throwing four touchdown passes.

These four touchdowns include at least one for each of his talented wide receiver trio: Dionte Johnson, Juju Smith-Schuster and Chase Claypool.

The Steelers defense was equally as dominant. They racked up 4 total sacks, 6 tackles for a loss and a turnover, led by TJ Watt. By the time the Bengals offense got set, the game was already over.

The Steelers humiliate the Bengals 36-10, start to finish

The injury-plagued 49ers came into this game strong, taking a surprising 10-3 lead on the Saints in the first quarter. Then from there, it was all downhill.

The Saints were punting away their first drive of the period when the 49ers return team decided to cough up the ball. Marquez Callaway was down there quick and ready to recover for his team.

Just like that, a light switch seemed to turn on for the Saints. From there, their rushing attack and Alvin Kamara took over.

Alvin Kamara piled up 98 all-purpose yards to go with his three touchdowns despite having a rough day on the ground. He led the Saints offense along with quarterbacks Jameis Winston and Taysom Hill as a result of starting quarterback, Drew Brees, being knocked out early in the game.

The Saints defense was absolutely suffocating, turning the 49ers over three times. In addition to this, they added on nine tackles for loss, nine defence pass and two sacks. Demario Davis, Malcolm Jenkins and the rest of the defense basically had their way for the final three quarters.

The battered and beaten 49ers fell to the Saints 27-13

The game started off with a 40-minute weather delay and it did not get any prettier from there. Both of the Browns running backs went over 100 yards, shredding Houston’s defense, while scoring a touchdown.

Nick Chubb ran for 126 and the score and Kareem Hunt added 104, as Cleveland took Houston for 231 yards on the ground.

Neither passing game really established itself as the weather destroyed any hope at a passing attack.

Both teams offenses played it safe as neither turned it over and only one made any real impact.

The Browns defense held onto their shutout until five minutes left in the game.

Myles Garrett continued his case for defensive player of the year coming up with three negative plays and leading the charge on a goal-line stand.

In the end, the Browns secured victory on a 59 yard Chubb run late in the fourth quarter, then took a couple of knees.

Browns win a sloppy one over the Texans, 10-7

Josh Jacobs ran wild all over the Broncos defense, piling up 136 all-purpose yards and scoring two touchdowns. Add another 81 rushing yards for Devontae Booker and a few miscellaneous carries and the Raiders ran for 203 yards as a team.

Las Vegas’ defense was even better. The silver and black turned the Broncos over five times, with Jeff Heath leading the bunch with two interceptions.

The Raider dominated throughout the whole second half, but there was a turning point where Denver stood a chance. Seconds before halftime the Broncos took a 13-10 lead on a five-yard touchdown run from quarterback Drew Lock.

This capped off a brilliant 10 play drive. The only problem was that the Broncos were penalized for holding on the play so the score did not stand. The very next play, Lock threw his second interception to Heath and the Raiders never looked back from there.

The Raiders dominated the Broncos, 37-12 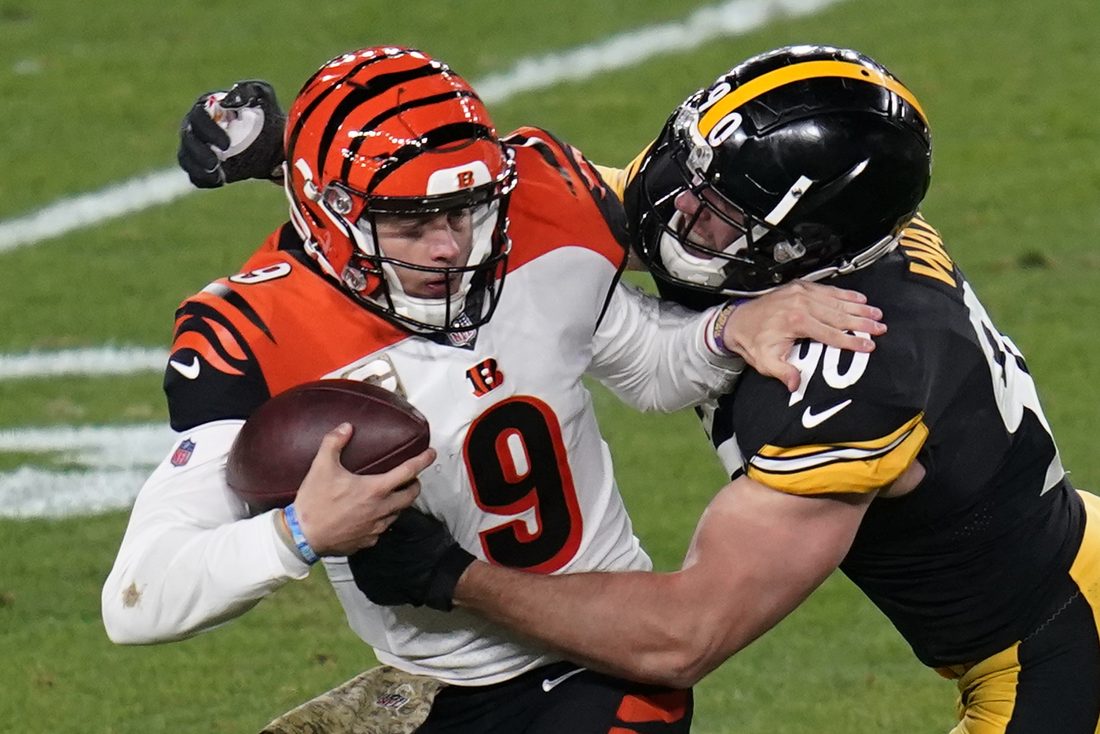