Lewis Hamilton has insisted that he is only just getting started after he created history at the Turkish Grand Prix, where he won a record-equalling seventh world title, drawing level with the great Michael Schumacher.

The debate has always been if Lewis Hamilton is better than Michael Schumacher; statistically, the answer would be yes. Hamilton edges Schumacher with the most Grand Prix wins with 94, three more than the great German Schumacher (91), Sebastian Vettel (53), and Alain Prost (51),

A jubilant Lewis Hamilton said after the race: “I feel like I’m only just getting started, it’s really weird.”  He is now statistically the most successful driver in F1 history after his 94th race victory clinched his seventh title. “I feel physically in great shape.

“This year has been the hardest year probably for millions of people and I know things always look great here on the big stage, it’s no different for us athletes.

“This year has been a challenge that I didn’t know how to get through, but with the help of people around me I managed to just keep my head above water and stay focused.”

He added: “I’m really hopeful for a better year next year and I would love to stay. I feel like we’ve got a lot of work to do here, we’ve only just started our work to make ourselves accountable as a sport.

“We cannot ignore the human rights issues that are going on around the countries we go to, and how we can engage with those countries and help them, empower them to do more to really change, not 10 years from now but now.

“I want to help Formula 1 and Mercedes in that journey. Also moving more sustainable as a sport, and I want to see if I can be a part of that, at least the first part of that for a little bit longer.”

Lewis Hamilton has gone from a kid brought up in Stevenage, UK, mad about F1 and watching races on TV growing up to being a seven-time F1 world champion – Anything is possible!

One thing that always stood out for Lewis Hamilton while growing up as a kid watching the sport he loves, was that he couldn’t find another driver to look up to “who looked like me”.

The F1 record-breaker has always been at the forefront for the F1’s push for equality, he has always been a vocal-campaigner for anti-racism. He would swap his F1 success for racial equality in a heart-beat and would like to see more diversity in Formula One.

Being the only black driver to have ever competed at F1 level, his message reaches far, above and beyond the surroundings of Formula 1 and he gives hope to young childeren sitting at home looking for inspiration – something he never had.

Speaking to Sky F1 “the most beautiful part” of his latest achievement is being an inspiration for kids at home.

“I remember being a kid and watching all these Grands Prix, loving cars, and not necessarily having someone who looked like me in the sport,” he admitted to Rachel Brookes. “But I still dreamt that I could still potentially one day get there.

“I think there’s going to be a lot of kids out there who still look at all these different industries and perhaps not see a representative or someone who looks like them… but you can be a trailblazer.

“You can create your own path for others to follow. I just say dream as big as you possibly can, dream the impossible, and don’t let people tell you that you can or you can’t.

“There’s nothing you can’t do if you put time and effort into it, and have the support behind you.”

Lewis Hamilton will line-up as a seven-time World Champion in the Bahrain Grand Prix in two weeks time November 27th. 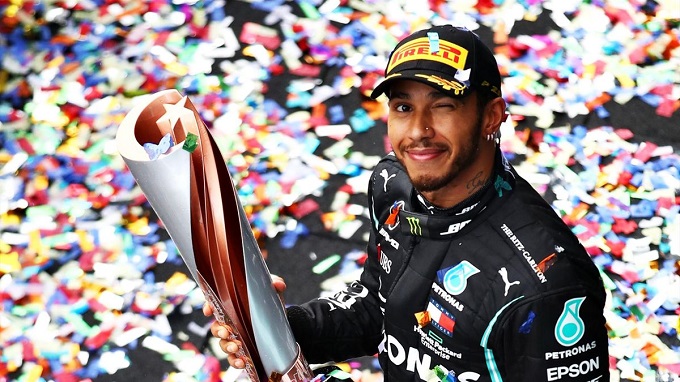