Taysom Hill did damage both through the air and on the ground, as he led the Saints to victory. Hill threw for 232 yards and two touchdowns and ran for 83 yards on the ground. Michael Thomas was his favorite target, as they hooked nine times for 105 yards. Jared Cook and Tre’Quan Smith had the touchdowns.

New Orleans rushing attack was strong as a whole, gaining 207 yards. All backs were lead by Alvin Kamara, as he gained 97 all-purpose yards and scored a touchdown.

The Falcons were able to drive the field most of the game, but New Orleans’ defense consistently clamped down and limited them to field goals. The Saints defense, led by Demario Davis, came up clutch in the fourth quarter when Atlanta was threatening to take its first lead of the game. Davis had three, huge, consecutive tackles, including one for a seven-yard loss to force a fourth down. On fourth, pressure from the Saints front four forced an incomplete pass.

The Saints took over are ran down the clock, defeating the Falcons 21-16

Matthew Stafford aired it out for 402 yards and three touchdowns, as he led the Lions to a huge come from behind victory over the Bears. Marvin Jones and TJ Hockenson led eight different receivers that Stafford completed passes to. Jones hauled in eight for 116 yards and a touchdown, meanwhile, Hockenson caught seven for 84 yards.

Adrian Peterson led a weak Detroit rushing game with 57-yards but did score two touchdowns, including the go-ahead one in the fourth quarter.

In defeat, David Montgomery also ran for two touchdowns, but he tallied 111 all-purpose yards for the Bears.

The Detroit defense was pretty quiet until the fourth quarter, and then it came to life. They forced a three and out with two tackles for loss from Reggie Ragland and Everson Griffen. The next series they came back with Romeo Okwara forcing a fumble, which was recovered by John Penisini for the Lions. They capped off the win by forcing a turnover on downs, with plenty of pressure from Jayron Kearse.

The Lions began the fourth quarter down 30-20. They forced three and out began their comeback. The Detroit offense took over after that and scored on a long strike from Stafford to Jones. Following the fumble, Peterson punched in the go-ahead touchdown.

Jonathan Taylor piled up 135 all-purpose yards and scored a touchdown as the Colts held off the Texans. Taylor led the Colts in rushing with 91 yards and got involved in the passing game, hauling in three passes for 44 yards.

Desahun Watson was strong in defeat, throwing for 341 yards through the air. Watson did, however, have a costly interception when the Texans were driving in the third quarter. That was not nearly as bad as the play that decided the game. Watson lined the Texans up with a minute and a half to play, just seven yards away from the game-tying touchdown. An errant snap later and Anthony Walker comes up with the ball for the Colts.

In addition to these turnovers, the Indianapolis defense attacked the line of scrimmage hard. They totaled five quarterback sacks and five additional tackles for a loss to go with seven defended passes.

Kirk Cousins passed for 305 yards and three touchdowns as the Vikings claimed victory in overtime. Rookie Justin Jefferson continued to excel, this time hauling in nine passes for 121 yards and a touchdown. Adam Thielen completed Cousin’s one-two punch with eight catches for 75 yards and his own touchdown.

Dalvin Cook added to his monster season with 120 yards on the ground. He also tallied six receptions to push his all-purpose yards to 179 for the game.

In defeat, James Robinson continued his impressive rookie campaign with 108 all-purpose yards and the game-tying touchdown late in the fourth quarter. On the defensive side, Joe Schobert was also amazing, piling up twelve total tackles, a sack, an additional tackle for loss and an interception returned for a touchdown.

The Vikings defense came up with many big plays during this game and laid down the law near the end of the third quarter. Jordan Brailford ended the Jaguars last possession of the third with a strip. On the next series, Ifeadi Odenigbo added a  safety for the Vikings. A three and out was then followed by a Cameron Dantzler forced fumble and recovery. All total the Vikings turned the Jaguars over four times.

Minnesota then tacked on a field goal to take 24-16 lead with four minutes left. At that point, the Vikings’ D cracked. They allowed the Jaguars a ten-play, 80-yard drive that evened up the score with one minute and eight seconds left to play.

The drama was not over, however, as the Vikings drove 42 yards in less then a minute to attempt a 51-yard field goal. It was…NO good. Then, the Jaguars took over and snagged a quick fifteen yard gain to set up a 62-yard attempt. It was also no good.

The game went to overtime. On Jacksonville’s first possession the Vikings D came up big for the final time. Harrison Smith intercepted a pass to set up Minnesota with the ball and an eventual game-winning field goal.

The Vikings came through in the clutch to knock off the Jaguars in overtime, 27-24

Darren Waller was an unstoppable force, as he hauled in thirteen receptions for 200 yards and two touchdowns. Derek Carr enjoyed a big day of his own with 381 passing yards and three touchdowns, leading an improbable comeback. Carr also added another score on the ground.

The Raiders’ rushing game was not all that strong with the absence of Josh Jacobs. Devontae Booker managed 50 of the unit’s 72 yards.

The Las Vegas defense came up huge early in the game, allowing their offense to score 10 points off of three turnovers. Clelin Ferrell forced two fumbles on two sacks, sandwiched around Trayvon Mullen interception. The Raiders sent the Jets to the half with these series, leading 17-13.

The Jets then stormed back in the second half to claim a 28-24 lead with five and a half minutes left in the game. The Raiders then took over and drove 56 yards, on fourteen plays, over the next four minutes. They ultimately came up empty, however, and New York just needed one first down to ensure victory. The winless Jets could not find a way to do that.

Las Vegas took the field with thirty seconds and a final prayer. A couple of deep shots later and their miracle happened. Carr connected with Henry Ruggs for a 46-yard touchdown.

The Raiders comeback to win in thrilling fashion over the Jets, 31-28

Jared Goff passes for 351 yards and a touchdown through the air, as the Rams take control in a crazy fourth quarter. Goff hit nine different targets, including three of his guys at least six times. Robert Woods led all receivers with ten receptions for 85 yards and a touchdown.

Los Angeles’ rushing attack piled up 120 yards, as three different runners scored touchdowns. Cam Akers led the backfield with 72 yards and a TD, to go with one reception for 22 yards.

Troy Hill starred for the defense, as he returned an interception for a touchdown to give the Rams a 38-21 lead with four and a half minutes to play. This game-clinching play happened just one series after another Rams’ turnover. Justin Hollins forced a fumble which Greg Gaines recovered, halting an eight-play Cardinals’ drive.

The fourth quarter of this game was wild, featuring five touchdowns, two turnovers and a missed field goal.

In the end, the Rams emerged with a 38-28 victory over the Cardinals

Wayne Gallman gains 135 yards on the ground as the Giants rushing attack and defense secure the victory. New York ran for 190 yards total. Alfred Morris added 39 yards and a touchdown.

The Giants passing game wasn’t really there without quarterback Daniel Jones, but Evan Engram and Golden Tate were still able to haul in four passes apiece.

New York’s defense was the real story of the game as they held the high-powered Seahawks offense without a touchdown until late in the fourth quarter. The G-men turned the Seahawks over twice and provided constant pressure on the line. All total they registered five quarterback sacks and another four tackles for a loss. Leonard Williams came up big time with two and a half of those sacks and two of the stuffs.

The Giants D was at it best in preserving their win on Seattle’s final drive. New York did not allow the Hawks to reach midfield, as Jabrill Peppers and James Bradberry provided tight coverage. Williams collected one of his sacks for an eight-yard loss on the second to last play of the drive. The final pass fell incomplete as both the rush and the coverage were excellent.

The Giants grind out a 17-12 victory over the Seahawks

Patrick Mahomes throws for 315 yards and a score as the Chiefs grind out a victory over the Broncos. Travis Kelce was Mahomes’ favorite target tonight, as he caught eight passes for 136 yards and the only KC touchdown. Tyreek Hill added six receptions for 58 yards.

Kansas City ran for 134 yards on the ground, as Le’Veon Bell paced the backfield with 40 yards. Bell also added two receptions for 15 yards.

Melvin Gordon was stellar in defeat, piling up 142 all-purpose yards, gaining almost as many yards as the rest of his teammates combined.

Tyrann Mathieu was the star of the Kansas City defense as he ended both the Broncos first and last drives with an interception. The Honey Badger finished the game for the Chiefs with that final pick, just after Mahomes led a field goal drive which took over five minutes off of the clock.

The Chiefs seal a bang-them-up, 22-16 victory over the Broncos

The Dolphins defense limited the Bengals offense to 233 yards, piling up 10 tackles for loss, 6 sacks and 2 turnovers. Xavien Howard and Tyler Boyd get ejected for trading blows.

Cleveland Browns steamroll then hold off the Tennessee Titans, 41-35

Baker Mayfield lights up the Titans early, throwing for four touchdowns and leading the offense to 344 yards and a 38-7 lead by halftime. The Titans surged in the second half to make it look close, but they were never truly in this game.

The Pack held Philly to 188 passing yards, getting Eagles QB Carson Wentz benched in the process.

The Patriots special team score twice and set up another score, as the defense forces two turnovers and three turnovers on downs to finish the game. 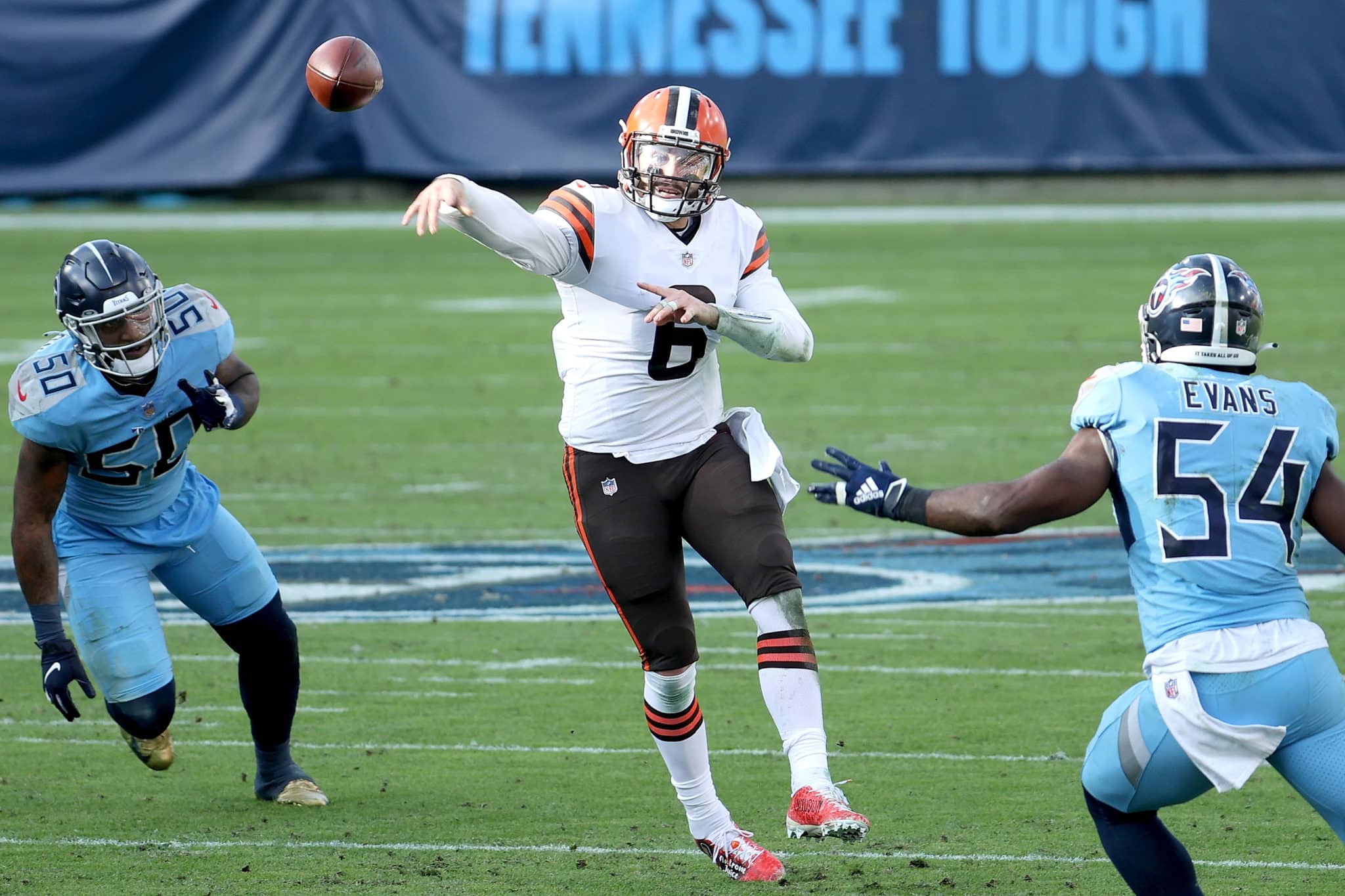