Favourite Quote: Peter Warr on Mansell: “He’ll never win a Grand Prix as long as I have a hole in my arse”.

Fun Fact: Before becoming an F1 driver, Mansell was an aerospace engineer.

Nigel Mansell is a legendary name within Formula 1. Yet his origins in the sport could not be more different than the early successes enjoyed by champions such as Verstappen or Hamilton. Nor did they herald a long and sensational career.

Mansell faced obstacles from team leaders and sponsors who actively worked against him racing in F1. His story is one you will rarely see in the sport again, filled with near misses, unexpected triumphs and a bitter rivalry with Nelson Piquet.

Fundamentally, to understand Nigel Mansell’s Formula 1 career, you cannot just look at his talents alone. His career flourished when it would have otherwise ended due to his ability to form positive and close relationships within F1.

Without Colin Chapman, Frank Williams, Enzo Ferrari and many more, Nigel Mansell may have never become a World Champion. His ability to maintain these relationships when his career became tough is why Mansell is one of the most iconic and successful personalities within Formula 1.

Nigel Mansell was born in 1953 and grew up in Birmingham. His beginnings were relatively normal for a Formula 1 driver, with his parents owning a teashop and having to use his own money to compete in motorsport.

Alongside racing in junior categories, he worked as an aerospace engineer and sold most of his belongings to finance his career. He competed in Formula Ford, becoming a champion in 1977 and moving up to Formula 3.

Despite early triumphs, he suffered multiple injuries during his early career, but he never let this deter him. When Lotus team owner, Colin Chapman, began to notice Mansell, he hid the extent of his injuries so he could test for the 1980 seat. He was beaten to it but did become the teams’ test driver, and thus his F1 career began.

Nigel continued to impress team boss Chapman in 1980, earning him three F1 starts that season. All three were unsuccessful, either retiring from the race or failing to qualify. Luckily Mario Andretti was leaving Lotus for the 1981 season, and the seat opened up for Mansell.

However, his place in the team was not certain as Lotus’ primary sponsor at the time, Essex Petroleum, was not exactly in favour of the British driver. Ultimately Chapman’s decision reigned supreme, and Mansell obtained the drive for 1981.

Throughout his tenure at Lotus, Mansell could never beat his teammate Elio de Angelis. Out of 59 race starts, he finished 24 of them, the car suffering from reliability issues. He also struggled to match the pace of De Angelis and was in a position where he could lose his seat.

ALSO READ:  Magnussen Gets Pole Position, Russell Crashes Out, A Preview For The Brazilian Grand Prix
Embed from Getty Images

Mansell was fortunate to stay in the sport, his close relationship with Chapman probably saving his career and ensuring Mansell was treated equally to his teammate.

Colin Chapman pioneered most of the technologies we see today in Formula 1 whilst enjoying World Championship success with his team Lotus and talented drivers such as Jim Clark. To have the backing of an F1 legend would have been essential for Mansell to remain optimistic about his racing career.

In an interview with Motorsport Magazine, he speaks of Chapman fondly:

“For me he was majestic and charismatic; he walked into a room and everyone stopped what they were doing. He carried himself so well and had a wealth of knowledge, an incredible entrepreneur, an incredible designer. For me, a father figure.”

Sadly Chapman passed away in 1982, leaving Mansell devastated. Peter Warr subsequently took over at Lotus, a figure who did not hold Mansell in the same regard as his predecessor. Straight away, De Angelis was back to being the number one driver within the team, with Warr reluctant to honour Mansell’s contract until 1984. Fortunately, the sponsors stepped in, preferring a British driver.

In 1984, his last season for Lotus, Mansell honoured his late friends’ memory by taking a career first pole and finishing within the top 10 in the championship. By then, however, it was a little too late, with Elio De Angelis finishing third and Lotus announcing they were hiring Ayrton Senna.

As much as Mansell must have been disappointed about leaving the team, a greater partnership beckoned and, ultimately, his most successful within Formula 1. For the 1985 season, he was off to Williams!

That year he partnered 1982 World Champion Keke Rosberg, who Mansell described as:

“…a thoroughbred racer. He didn’t suffer fools easily and we got on very well.”

Their positive relationship aided Mansell in his first-ever Formula 1 win. At the 1985 European Grand Prix, Mansell had a bad start, dropping behind Rosberg and Nelson Piquet. Those two, however, had a collision, and Rosberg held back a surging Senna just enough so that Nigel Mansell won the Grand Prix with a gap of 24.1 seconds!

By gaining the opportunity at Williams, in a competitive car, Mansell enjoyed two race wins in 1985, proving Peter Warr wrong that he would never win a race. Mansell’s good luck at Williams continued throughout 1986, finishing 2nd in the championship. His newfound confidence from his race wins and how good the FW11 was, changed the complexion of Mansell’s career.

However, there were still many bumps in the road for Mansell. In 1986 he was joined by a new teammate, 2x World Champion Nelson Piquet, and thus began one of his most toxic relationships within F1.

Piquet had little respect for his teammate, branding Mansell an “uneducated blockhead” and describing his triumph over him for the 1987 World Championship as “a win of intelligence over stupidity”.

His abusive campaign did not end there. He made disgusting comments about the looks of Nigel’s wife, Roseanne, which Piquet had to retract due to the threat of legal action.

Despite losing the championship, 1987 was a good year for Mansell, with six wins, including an iconic victory at Silverstone. However, this season may never have come to be without Frank in his corner. 1986 saw Frank’s accident which meant he had to be away from Formula 1.

The tension between the team and their engine supplier Honda grew, the latter desiring Piquet to be the team’s number 1 driver. At one point, they wanted to replace Mansell with their Japanese test driver. Yet, Williams remained confident in their driver lineup and saved Mansell’s spot on the team.

1988 was not an excellent year for Nigel or Williams. Their reliability was poor, and he only managed to finish 2 out of 14 races! His time at Williams ended, and he was heading towards new adventures at a little old factory called Maranello…

Nigel Mansell was the final driver to be selected by Enzo Ferrari personally for their 1989 race seat. From the way Mansell talks about the motorsport legend, the level of respect is more than evident:

“He’d move his finger, everyone would be silent, he’d say a few words and then once he finished everyone started talking again. Three or four minutes after this he moved – again, instant silence – but he only went to pick up the salt. As soon as they realised that off they went again. Instant respect – absolutely mind-blowing.”

However, Mansell’s experience at Ferrari brought him down to earth with a bump. In 1989 he finished 4th in the championship, and in 1990, Ferrari suffered from reliability issues. The arrival of Alain Prost once again shepherded Mansell to the role of a number two driver, and enough was enough. The relationship with the team became strained, and Nigel Mansell announced his retirement that season.

Poor Nigel probably wanted to put his feet up and relax with his wife on the Isle of Man, but Frank Williams had other ideas and sought to rescue his driver in distress. Mansell recalls:

ALSO READ:  Toto Wolff alludes to a future issue with Hamilton and Russell: ‘We Have Two Alpha Drivers’

“he chased me around the world for a number of weeks trying to get me to come back and un-retire.”

It was a good job he did too! Only this time, he knew his worth and demanded that he be the number one driver and the team had to do everything possible to help him win. Eventually, Frank agreed, and Mansell made his way back into F1, becoming the highest-paid British sportsman in 1991.

After all of the wins, the close championships and the disappointments for Mansell, 1992 was his year. And he was not messing around! He won the first five races of the season, going on to seal the championship with five races to go at the Hungarian Grand Prix. He overtook Jackie Stewart as the most successful British driver and set many records that a certain Michael Schumacher could only break.

It was his perfect season, and you get the sense he could have carried on for more. Yet, alarm bells rang once again for the British World Champion as tension grew within Williams, and they signed his rival Alain Prost for 1993. Mansell proceeded to retire from F1 for the second time.

However, Mansell could not get rid of the racing bug after his retirement. He competed rather successfully in IndyCar, BTCC and Le Mans, the latter with his two sons in 2010. Mansell also returned to F1 in 1994 with Williams and took his final Grand Prix victory there that year. He moved to McLaren in 1995, where he experienced a lacklustre season and finally retired from the sport at 42.

I had always had a mild fascination towards Nigel Mansell, but that was mainly because of his moustache and Birmingham accent. He was always just a legend of the sport rather than someone I had been able to watch and appreciate during his time, but I wish I had been alive for his era in Formula 1.

After researching Mansell and watching his old races, he is now one of my favourite F1 World Champions. He could have given up on this sport so many times, and he always seemed to come back until he got that World Championship aged 39.

For me, however, his relationships within the sport make him so memorable. To forge close bonds with the greats from various eras shows how respected he was as a Formula 1 driver. It saved him when his place in F1 looked precarious and is an often overlooked component of his talent.

Mansell winning a World Championship was never inevitable as Hamilton’s or Verstappen’s were, but the fact he still managed it? Well, that makes him all the more special. 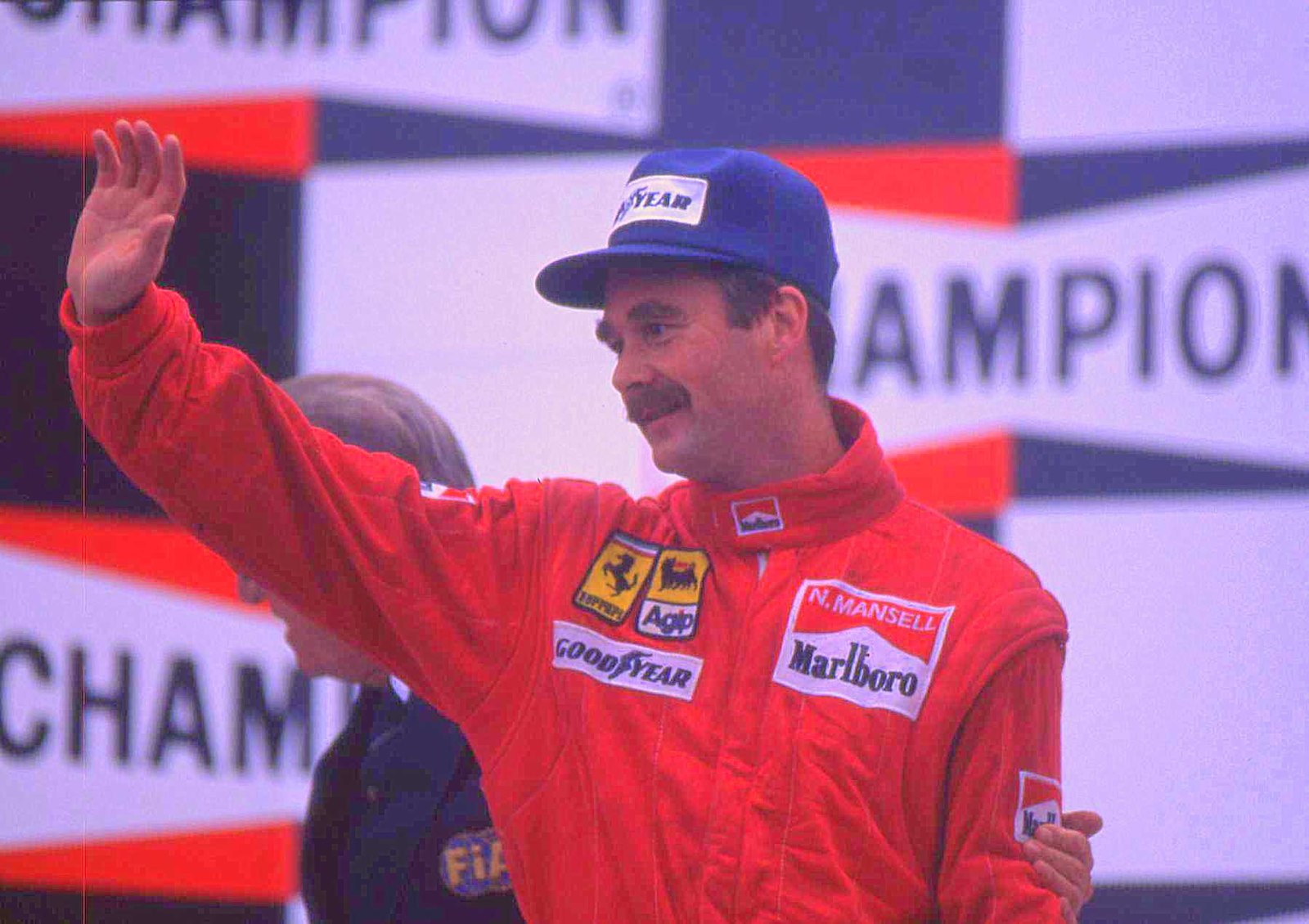