Round 4 of the NRL season was a weekend of carnage on the scoreboards and has left many questions hanging over the NRL’s rule changes and expansion ambitions.

The first four games had margins of over 30 points each and the average margin of over 26 for the whole round was the highest in over 16 years. The noticeable gap between good and bad teams has been blamed on the off-season rule changes designed to promote attacking play, and weaponised against the NRL’s aim to bring a second Brisbane-based team into the competition.

This is what went on over the Easter weekend.

The gap between the best- and worst-performing teams was on stark display as last year’s minor premiers handed the Manly Sea Eagles their worst ever home defeat.

With Nathan Cleary back from injury, Penrith was carving up Manly’s defence all night and the Sea Eagles had nothing to respond with. Cade Cust scored their only try in the 32nd minute by which time the Panthers had already piled on 22 points of their own.

Most of that came along Penrith’s left-wing where Brian To’o and Viliame Kikau wreaked havoc with two tries each and Jarome Luai also had a heavy hand in the carnage. Each try exposed the Sea Eagles’ lack of spirit and coordination as the try-scorers ran through as many as four defenders with little trouble. Manly’s woes were compounded by injuries to fullback Dylan Walker as well as Morgan Boyle and Moses Suli.

It leaves a bleak outlook for the Sea Eagles’ next few games as they head on the road to face rising clubs in the Warriors and Titans. Conversely, the Panthers are riding high off their best start to a season in the NRL era and can be expected to surge through a reasonably easy next two months of fixtures.

Another poor performer in Canterbury-Bankstown hit an historic low in their traditional Easter clash with the South Sydney Rabbitohs.

Much like the Sea Eagles the night before, the Bulldogs showed little heart against a club playing far better. And their loss came in more controversial circumstances with Lachlan Lewis kept on the field despite a clear head knock five minutes in. The five-eighth took the knock after tackling Josh Mansour and was visibly staggering on the field but it took the Bulldogs two minutes to take him off for a head assessment which he subsequently failed.

The Rabbitohs took 17 minutes to open the scoring when Mansour crossed over near the right corner off some quick passing, and from there they steadily worked their way beyond Canterbury’s reach. Disciplinary issues took some gloss off the victory as five-eighth Cody Walker caused a scuffle by pushing Canterbury halfback Kyle Flanagan to the ground.

But it was the points that mattered as South Sydney romped home and kept the Bulldogs scoreless for their third consecutive game. It’s a record matched only by the Cronulla Sharks of 2014 and leaves Canterbury in a dire position coming up against the Storm next week.

Following a turbulent week that saw the Brisbane Broncos temporarily relocated to Sydney after a COVID outbreak in Brisbane, their game against Melbourne Storm summed up the past year of their woes.

Despite an early try to Jamayne Isaako, everything went Melbourne’s way afterwards. Ryan Papenhuyzen starred as the Storm’s only point-scorer in the first half, claiming four tries in 11 minutes with the help of Josh Addo-Carr and Justin Olam among others. That was more than enough to turn the tables on the Broncos after they’d appeared ominously competitive early on once again before their defence and attack crumbled.

The star Storm fullback kept harassing the Broncos’ defence in the second half while his teammates took up try-scoring duties. George Jennings bagged himself a double, first off Tom Eisenhuth who successfully chased down a big kick from Jahrome Hughes, before crossing five minutes later on the receiving end of Melbourne passing the ball down the width of the field. The Storm’s final try in the 69th was a less orthodox effort with Jesse Bromwich offloading to Papenhuyzen in front of the goalposts, who caught and passed behind to Munster who gave the ball a few kicks into the try-scoring area before grounding it.

It puts the Storm back in the winners’ circle after disappointing losses against Parramatta and Penrith while showing the Broncos still have a long way to go in their rebuild.

The fourth and final major blowout of the round came between the injury-riddled Cronulla Sharks and North Queensland Cowboys.

After playing without an interchange bench for much of last week’s loss to Parramatta and consequently with an already under-strength 17, the Sharks responded much better to further injuries halving their available interchange for a large part of this game. Mawene Hiroti scored in the corner early for them and they kept their cool after a small passing mistake let Hamiso Tabuai-Fidow run 90 metres for the Cowboys’ only try of the first half. Cronulla hit the accelerator for three tries in the last ten minutes before half time for a virtually insurmountable lead of 36-6.

Six Cronulla players had a direct hand in demolishing the Cowboys and Chad Townsend’s perfect conversion rate made the margin look even more imposing. Valentine Holmes delivered the Cowboys a consolation try against his old club, but North Queensland find themselves in a dire situation as the only other winless team alongside the Sea Eagles and Bulldogs.

Cronulla is not out of the woods themselves – they’ll still be short on options for their squad in the coming weeks in which the Roosters and Storm are among the clubs awaiting them.

Also forced out of Queensland for COVID reasons, the Gold Coast Titans took their ‘home’ game down to Sydney for a true test of their promise against the Canberra Raiders.

It was not to be as the Raiders put in an outstanding defensive effort against Gold Coast, who had more ball but kept falling short of the try line. Jordan Rapana picked up the first points for Canberra after Elliott Whitehead ran clean through the defence and alongside Jarrod Croker barely held off their pursuers. The Titans took several cracks at equalising but lost balls and impressive try savers kept them from doing so until the 38th when Corey Thompson dived for the corner and barely kept his feet in the field of play while being tackled by Charnze Nicoll-Klokstad.

A missed conversion kick and an earlier penalty goal to the Raiders meant the Titans were still behind by four, and further desperate efforts proved unsuccessful. After holding them off, Canberra mounted a charge of their own and saw Josh Papalii crash over to extend the lead. Ryan Sutton sealed the win in a similar fashion with three minutes remaining.

Despite coming up short, the Titans still demonstrated plenty of potential, and will get to return home next week to play the inconsistent Knights. Canberra will have their work cut out for them playing the next two games against the remaining undefeated teams of Penrith and Parramatta.

St. George Illawarra kept their surprise winning streak going at Newcastle in a heated encounter with the Knights.

Some early push and shove set the mood early with David Klemmer reported for elbowing his Dragons opposite number in Blake Lawrie, before St. George sent Mikaele Ravalawa over the try line. However, the try was disallowed for the ball coming forward off Josh Kerr, and instead, it was Gehamat Shibasaki to score first for Newcastle shortly after thanks to some mishandling of the ball from Cody Ramsey. Trent Merrin scored the Dragons’ first try in the 31st but a field goal from Kurt Mann just shy of half time kept the Knights ahead by one.

Injury rattled the Knights throughout with Mann, Tex Hoy and Mitchell Pearce among the key players affected, all while St. George went full steam ahead. Tariq Sims scored two tries in ten minutes which put the Dragons ahead for the last 20 minutes, and Brayden Williame put them beyond a converted try by grounding a grubber from Corey Norman. Newcastle tried to close the margin by sending Hymel Hunt over in the corner but a controversial forward pass call kept the Knights from getting back within striking distance.

A brutal day for the Knights also saw injuries to some important players in their reserves side, which could see them struggle to name a full 21-man squad for next week’s match with the Titans.

The Sydney Roosters bounced back well from last week’s loss with a successful unveiling of up-and-comer Sam Walker against the New Zealand Warriors.

It was neck and neck to start with and the Warriors stayed ahead of the Roosters for the first 25 minutes, but the Chooks soon found their groove with Brett Morris bagging yet another two tries for a total of nine after four games this season. Earlier, Nat Butcher had equalised the Warriors’ only two tries with the assistance of Walker.

Walker, who replaced the injured Luke Keary in the halfback role, was noted for his composure throughout the game that took priority over the skill plays that had seen him touted as a future star of rugby league. The Roosters ran away with the game in the second half with Drew Hutchison and Josh Morris adding to the total.

The Warriors have a good shot at redeeming themselves next week against the lowly Sea Eagles, while the Roosters will host the under-strength Sharks.

The other traditional Easter clash was relatively tighter than Good Friday’s blowout but it was still never in doubt as Parramatta ran away with a win over Wests Tigers.

The Eels took the early lead with plenty of passing work in order to send Marata Niukore and Isaiah Papali’i over for a try each. And the lead was where they stayed, although Wests had a couple of spells where they closed in and threatened to take the lead away. Daine Laurie took a brilliant tap back from Luciano Leilua to start things off for the Tigers before Stefano Utoikamanu took full advantage of Blake Ferguson dropping the ball in front of his own tryline.

But despite having more of the possession and making fewer errors, Wests did little more than threaten to get ahead. Each time they looked like clawing their way back, Parra found some momentum to stay firmly in front. Ferguson made up for his first-half errors with two spectacular tries, including at the final siren to seal the deal.

Parramatta’s undefeated record will take plenty to defend as they face off against the surprise packet Dragons. Wests meanwhile are hoping to properly kick their season into gear against fellow cellar dwellers the Cowboys. 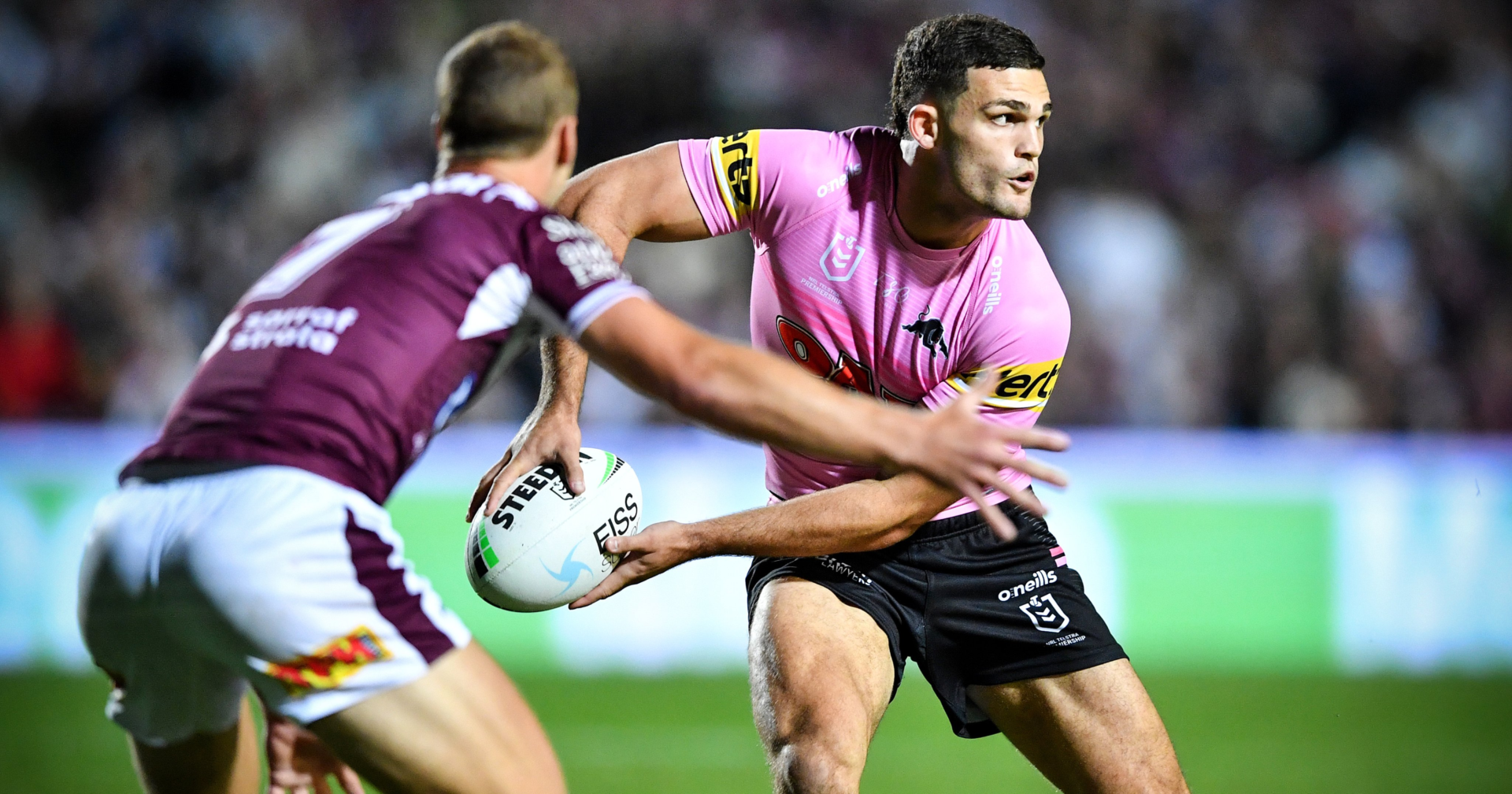