Round 6 of the NRL season was dedicated to remembering late rugby league legend Tommy Raudonikis after he passed away from cancer earlier in the week. Raudonikis, who played for Wests Magpies and the Newtown Jets in the ‘70s and ‘80s and captained NSW in the first-ever State of Origin game, was honoured with a minute’s silence before every game this round while Wests Tigers (which was formed by a merger involving the Magpies) rested the No. 7 halfback jersey that had been Raudonikis’ usual position.

Following a tumultuous week off the field that saw medical retirements and heated contract talks, the weekend produced a mixed bag of results as the Sea Eagles and Cowboys claimed their first wins of the season, the Roosters made a late comeback, and some of the top clubs broke records in the latest blowout wins.

South Sydney shook off the gossip surrounding the futures of Adam Reynolds and Wayne Bennett as they handed the Brisbane Broncos yet another disappointing drubbing.

The Rabbitohs were in control right from the start as Reynolds combined with Benji Marshall to keep the Broncos on the back foot for most of the game. Both playmakers contributed a try each to the total in amongst directing South Sydney’s attack. Alex Johnston also found the tryline for the Bunnies and Reynolds closed out the first half with the first two-point field goal from 40 metres since the rule was introduced in the off-season.

Jamayne Isaako scored the Broncos’ only points and their defence was also poor, failing to get the numbers where they needed to be to repel the Rabbitohs. Each try was scored too easily; Latrell Mitchell broke out of an incomplete tackle by four Broncos to score in the 51st, and another four failed to hold the ball up as he crashed over after taking a Reynolds kick for the final try of the night.

Both sides will again have opponents on the opposite ends of the ladder respectively next week, with the Broncos hosting the undefeated Panthers and Souths up against the lowly Tigers.

It was far from pretty but Manly Warringah have their first win of the season after a field-goal victory over the Warriors.

In contrast to the one-sided affairs that have become the norm the first thirty minutes went scoreless, though not for a lack of trying by either side. After several failed attempts, the Sea Eagles finally broke through when Jason Saab chased down a long kick with blistering speed to ground the ball just after it bounced behind the tryline. The Warriors responded three minutes later as Jack Murchey broke through the Manly defensive line and attempted to pass to Ken Maumalo, which Saab intercepted but Maumolo regathered to put down in the corner.

The Warriors had a lead of their own shortly into the second half thanks to Sean O’Sullivan but Manly equalised after Kodi Nikorima lost the ball in front of the tryline and Josh Schuster pounced on it. The scoreline remained at 12-12 for the remaining twenty minutes with both teams trying for field goals in the final five. In the dying seconds, it was Daly Cherry-Evans whose wobbly kick from just short of 30 metres out made it through the goal posts to win it for the Sea Eagles.

Manly didn’t come out unscathed, with hamstring troubles likely keeping fullback Dylan Walker out for a few weeks, while Jack Gosiewski suffered an injury to his foot that could cost him his season.

With five wins from five games, the Penrith Panthers recorded their best ever start to a season in a fiery clash against the Canberra Raiders.

While the opening try went to the Raiders’ Jack Wighton, Penrith overcame their sloppy start and soon they were unstoppable. It started with a penalty in the Panthers’ favour after Hudson Young started a small scuffle, with Charlie Staines charging for a try in the right corner shortly after. Halves Nathan Cleary and Jarome Luai both put on a show, with Luai setting up Matt Burton for a try with a beautiful pass before he crossed over himself after collecting his own pass.

Cleary contributed a perfect conversion rate and the last try of the game, while Staines claimed his second with a crafty step inside to dodge any opposition. Tensions boiled over again as another push and shove was sparked after Penrith fullback Stephen Crichton pulled Raider Joseph Tapine into one of the Panthers’ try celebrations.

The Panthers had the last laugh regardless, keeping the Raiders to just one more try in the second half for a convincing win that leaves them as the only undefeated team of the season so far.

A kickoff that went out on the full set the tone for the Knights as the Gold Coast Titans scored a slew of points to entertain the home crowd.

David Fifita starred yet again with a hat trick while Corey Thompson and Patrick Herbert also took part in the slaughter and every other player put theirs all into it. The Titans looked to be in the hard attacking spirit all game as everyone threw the ball every possible way and pulled out every trick they had under their sleeves. Only a hard head knock to Phillip Sami early on was of any trouble.

Newcastle’s fate was all but assured by the 26th minute with a 22-6 scoreline, and even with Titans centre Patrick Herbert sent to the sin bin for a professional foul the Knights had no comeback in them. Injuries attained over the past several rounds have taken their toll and the under-strength side struggled to keep a lid on the Titans’ exciting plays.

The Knights expect to have several key players back in tow when they face another injury-riddled team in the Cronulla Sharks next week.

Canterbury may have broken their point-scoring drought but were still light years behind the Melbourne Storm who charged through for another massive victory.

By the 21st minute when Luke Thompson snapped the streak rushing in off a short pass from Kyle Flanagan, the Storm had already scored 18 points equivalent to what the Bulldogs would go on to attain in the whole game. By half time the gap had widened to become a 30-6 lead and the Storm still showed no signs of slowing down.

The try-scoring action was shared around with none of Melbourne’s nine tries being scored by the same player twice. Despite the heavy victory, coach Craig Bellamy still had his complaints, targeting the team’s defensive effort and poor discipline that allowed the Bulldogs to score at all.

It’s an act they’ll seek to have cleaned up before their next game against the Roosters.

An upset begged but it was not to be as the Roosters surged ahead in the last twenty minutes against Cronulla.

From the first minute, things looked bad for the Roosters when Sharks lock Toby Rudolf slipped through the defensive line with ease and tries to Mawene Hiroti and William Kennedy within ten minutes seemed to assure a good night for the Sharks. Brett Morris shortened the gap in the 25th but a penalty goal pushed Cronulla beyond a converted try and Jack Williams extended the lead further when he charged over after collecting Jesse Ramien’s offload.

But the Chooks found their groove afterwards with the help of rising star Sam Walker, who scored the first try of his career and assisted two of the Roosters’ other three with stellar long passes. Cronulla still put up some desperate defensive efforts but with some of their more experienced players in Josh Dugan and captain Wade Graham out with head knocks, any momentum they’d had before vanished completely.

The heroics from Walker and Morris as well as the former’s halves partner in Drew Hutchison gives the Roosters plenty of confidence in spite of the extensive injury list.

An emotional day was to be expected as Wests Tigers paid special tribute to Tommy Raudonikis but they left their home crowd with some unwanted emotions in a rollercoaster match-up against North Queensland.

Shifts in the crowd’s responses to the game were noticeable throughout as they became quieter and quieter with each Cowboys try. Hamiso Tabuai-Fidow began the charge with a 70-metre run and chip-and-chase try reminiscent of a matchwinner scored by former Dragons player Nathan Blacklock 20 years ago at the same ground. Three tries later and the Tigers were met with boos from their own fans as they headed into the sheds.

But they reignited the crowd after their return to the field and in the space of ten minutes reduced the gap to just eight points. With four the margin at the final siren, the game may well have been decided by a controversial bunker call, which denied Wests a 61st minute try after James Roberts was deemed to have obstructed Coen Hess in the defensive line. A try to Lachlan Burr shortly after that decision kept the Cowboys just out of reach and handed them their first win of the season.

A second victory in as many weeks begs against the bottom-placed Canterbury Bulldogs.

St. George Illawarra can now firmly be considered contenders for finals, with their upset victory over Parramatta launching them into the top four.

The Dragons held Parra scoreless in the first half with a gutsy effort to hold off Blake Ferguson early, and down the other end, they stunned the Eels with Jack Bird cruising through for the first try. Matt Dufty was awarded a penalty try after it was determined he would have regathered his own kick behind the try line had Nathan Brown not pushed him away without the ball. Mikaele Ravalawa scored in the corner in the 32nd for a half time scoreline favouring the Dragons 18-0.

They then had a poorly-disciplined start to the second half that saw Tariq Sims sin-binned and Eels second-rower Isaiah Papali’i crashed for Parramatta’s first try shortly after. But the Eels otherwise failed to capitalise on their one-man advantage as either silly errors cost them or the Dragons continued to repel them. With another try apiece in the final ten minutes, Parramatta recorded their first loss of the year while the Dragons are looking even more threatening.

While it’s still too early for Dragons fans to have plans ready for finals, a reasonably easy series of upcoming opponents which include the Warriors and Bulldogs offers plenty to celebrate for a little while yet. 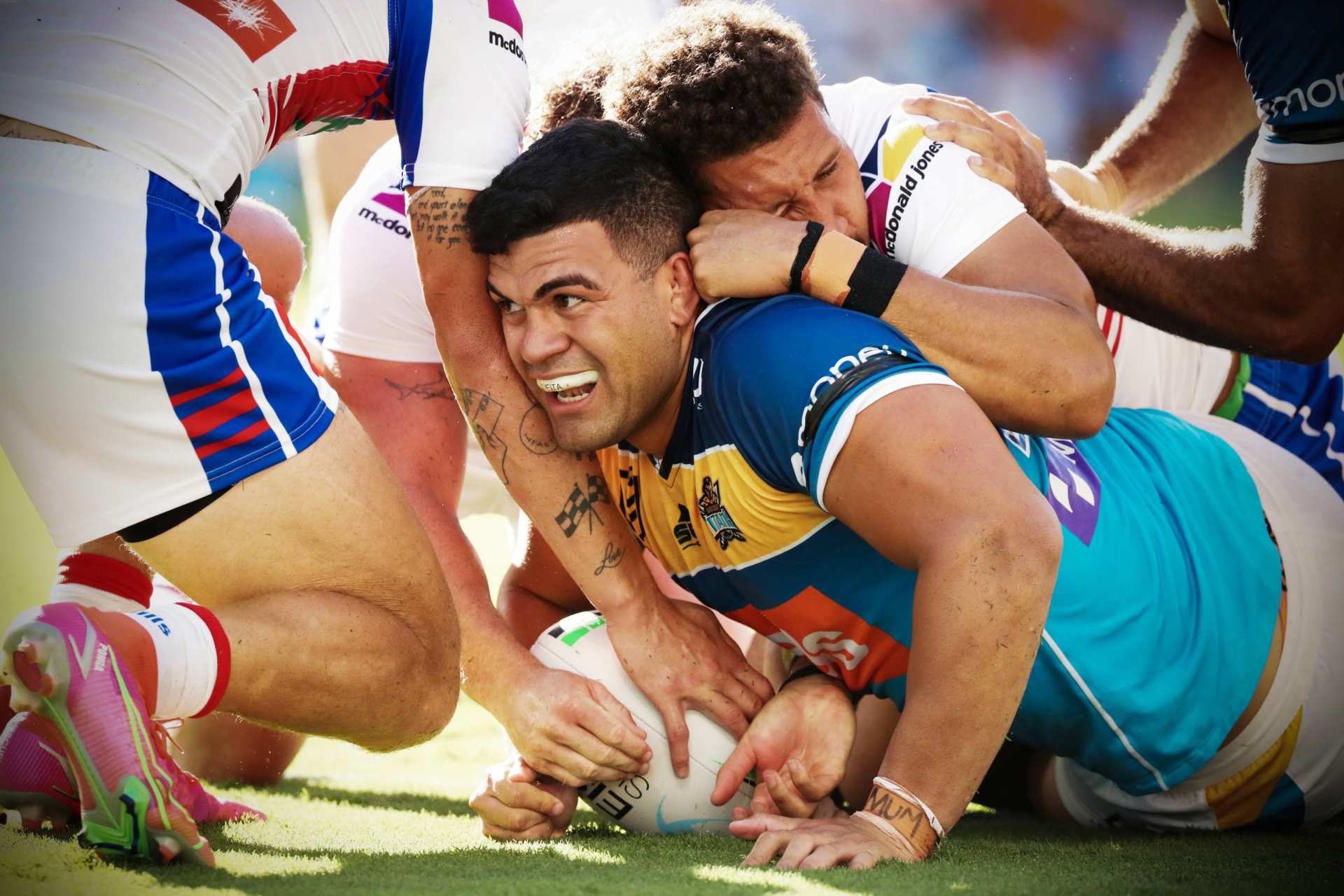