Sunday at The Masters, one of the greatest days in golf, and after moving day this is how the final four groups shaped up on the leaderboard…

Hideki Matsuyama’s superb 65 on Saturday, including a sublime 30 on the back nine after some extraordinary iron shots into the green and a wonderful recovery chip on eighteen to save par and post the only bogey-free round of the tournament so far, was the story of ‘Moving day’ and became the first-ever Japanese golfer to ever lead the Masters after any round in history.

Could he hold off the chasing pack to take the green jacket? You felt if anyone was going to catch him it would be from the list above, and only Jordan Spieth has won this event before back in 2015 so unless he made a good charge on Sunday, we would be having a first-time winner in this one, but what would happen on the final day of this great event in Augusta?

Will Zalatoris was having superb first masters so could he possibly pull off a sensational win and become the first rookie winner since Fuzzy Zoller in 1979? Or could Marc Leishman become the only second Aussie to win a green jacket? Justin Rose, who led after 36-holes and for most of the third round until Matsuyama’s charge on the back nine on Saturday, has come close on a couple of occasions so could he finally get over the line here?

Xander Schauffele is another who is tipped by many to win a major or two, perhaps this could be his moment, or could Canadian Corey Conners, fresh from a hole in one at the sixth on Saturday, or Brian Harman made a charge on Sunday and topple the leaders? We would soon find out.

Matsuyama did in fact bogey his first hole and saw his four-shot lead overnight almost disappear as it was trimmed to just one, but that was a close as they would come to the Japanese superstar, and a two-under-par front nine saw him as much as six shots ahead at one stage, and five ahead as he reached the back nine, and it seemed as if he was going to cruise off into the distance and win it at a canter.

Nobody behind him could really mount a charge, John Rahm, who only turned up on Wednesday after the birth of his new baby, had a brilliant final day and shot a six-under round of 66, but he was too far back to really mount a serious threat to the leaders, whereas players like Spieth, Leishman, Rose, Conners and Harman never really looked like having the game to pounce if the leader was to slip up.

It ended up that the two golfers with any chance perhaps of taking advantage of any Matsuyama nerves on the final dozen or so holes would be Zalatoris or Schauffele, both were just about holding onto the coattails of the Japanese player, but it did seem a rather forlorn effort as Matsuyama was doing what he needed to do to stay well out in front.

However, on Hole 15 and with Matsuyama and his playing partner Schauffele both on the fairway, Matsuyama inexplicably went for the green with his second shot to the par 5 and adrenaline saw him hit it way over the green and into the water behind, leaving him a very difficult chip back and staring at least a bogey in the face, Schauffele sent his second into the bunker but he was certainly in a better position that is for sure.

Matsuyama did eventually make a six, which was the best he could have done, and Schauffele almost holed his bunker shot for an eagle, but a tap in birdie meant that four-shot lead was now just two, and Schauffele was suddenly right back in the tournament, but on the Par 3 sixteenth he sent his tee shot into the water and ended up making a triple to pretty much ending his chances of stealing the green jacket, and although Matsuyama made a bogey on 16, it was only Zalatoris who could really stop him now.

The young American, who was making his first Masters appearance of course, ended up posting a two-under-par round to set the clubhouse lead at nine-under, two shots back from Matsuyama, so the leader knew two pars down the last two holes would be enough, he did indeed par the 17th and after a fine tee shot on eighteen, just had to hit the green and two-putt for the win.

He sent his second shot into the greenside bunker though, but a wonderful chip out of the trap to several feet meant he now had two putts to win the green jacket as even a bogey would be enough to win, he missed the putt but tapped home for a bogie and a one-over par round of 73 to become the first-ever Masters champion from Japan, and the first male golfer from the country to ever win a major, so history was indeed made.

Matsuyama had stumbled over the line on Sunday, but he had got over that line and joined an established list of golfers to don that famous Green Jacket, and he had done this ten years after winning the low amateur at the 2011 Masters, that back nine on Saturday had ultimately won him this tournament in the end, and he managed to hold his nerve and take a marvellous win.  Well played Sir, well played…

Finally, here is the leaderboard showing all the players who finished under par, there weren’t too many of them this year… 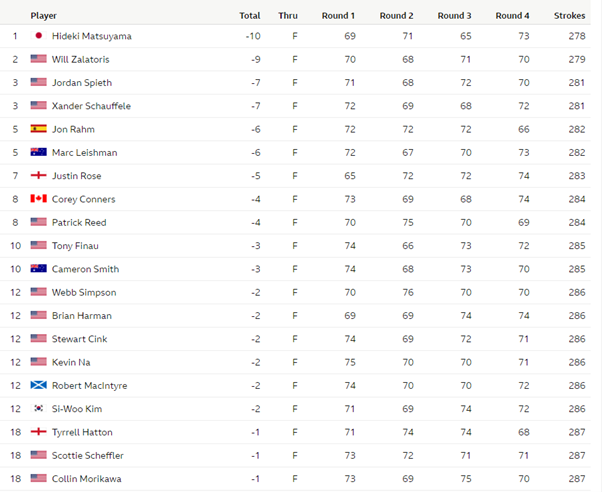 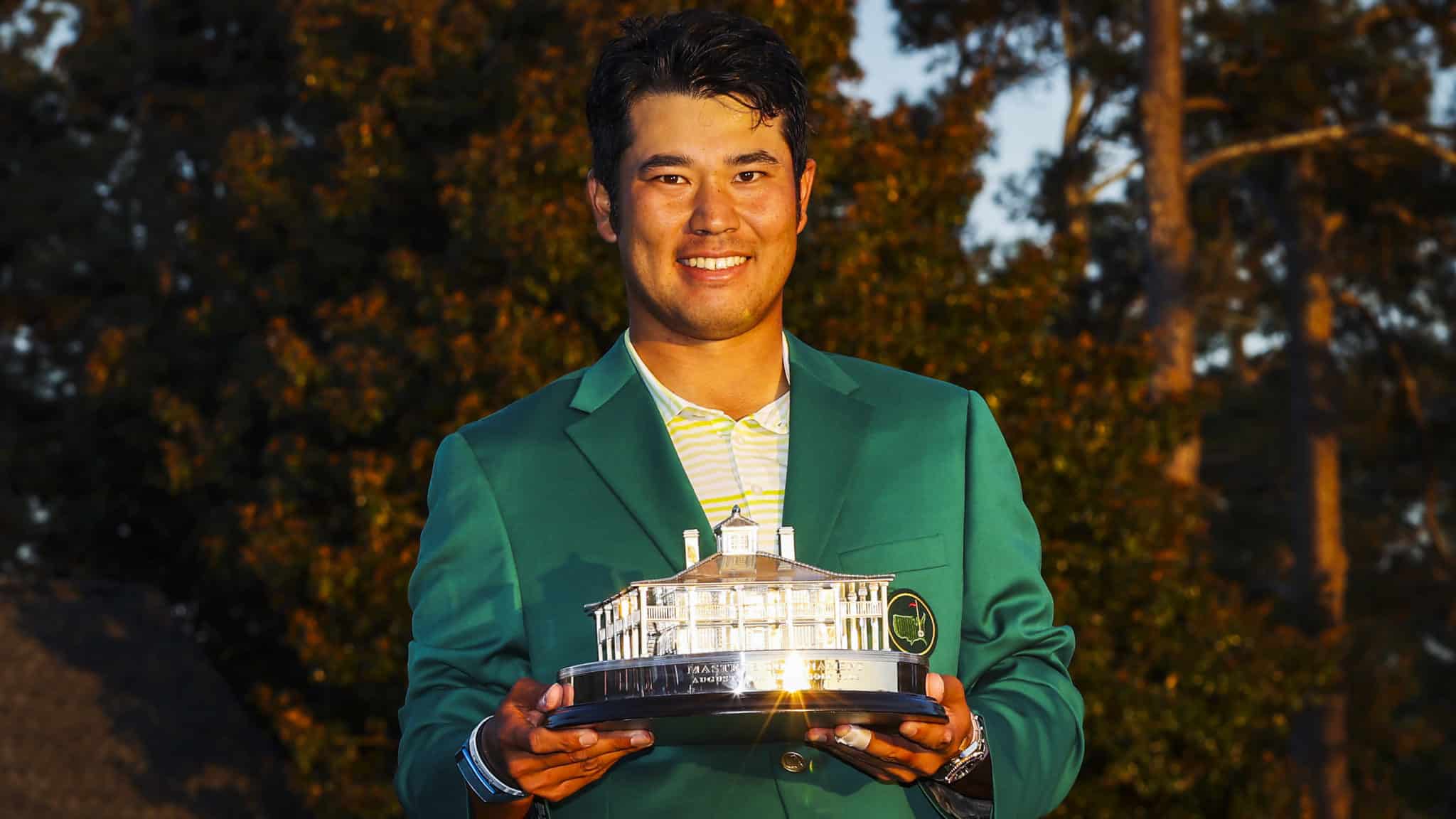