Washington, D.C.:  It was a hockey night in the nation’s capital,  which marked the return of Pittsburgh captain Sidney Crosby from a lower body injury, the same injury that  kept him out of the line-up from the recent NHL All-Star Game in Columbus.

The Wednesday Night Rivalry at Verizon center pitted captain versus captain, Alex Ovechkin and Crosby, for the 38th time in NHL history, a decade of rivalry.

This Metropolitan Division game included the Washington Capitals (25-14-9) versus the Pittsburgh Penguins (27-13-8), without Evgeni Malkin, the Penguins formidable Center man who was recently placed on injured reserve (IR).

Former Pittsburgh defenseman, Brooks Orpik and Matt Niskanen proved to be just what the Caps ordered as they helped to shut-down and shut-out the Penguins offense. The previous game between these two teams ended in favor of Washington, 3-0 and this game wasn’t much different.

Braden Holtby and Marc Andre Fleury started in net for Washington and Pittsburgh, respectively. Play began with a shot on net by Beau Bennett, Holtby froze the puck for a stoppage in play 16 seconds in.

Tom WIlson and Zach Sill were involved in some extracurriculars after the whistle.  Each team had only won 1 of the last 5 games played up until this point. Shortly after both men came out of the box and off of a slick feed from Nick Backstrom, Ovechkin scored on a deflection.  Capitals 1, Pittsburgh, 0.

Pittsburgh drew a hooking penalty at 7:35 in the first,  sending John Carlson to the box, but the Penguins couldn’t capitalize on the man advantage. The Capitals applied pressure in the offensive zone and the Penguins countered. Barry Trotz, Capitals’ coach experimented with line changes to ensure the most favorable match-ups for their defensive zone face-offs:  most importantly, to shut down Crosby.

A spirited match-up between 20-year-old Tom Wilson of Washington dropped the gloves directly after a face-off with LaPierre of Pittsburgh. And both men were slapped with 5 minute majors for fighting. Pittsburgh struggled with puck possession in their own end as Washington kept coming, Fleury made a sliding left toe save to keep his team within one goal.

The rest of the period proved to be excellent back and forth play, with shots on goal by both teams and face-off wins in favor of Washington, 8-11.

The second period was all about Washington, even though Pittsburgh played close defense.  Face-off wins helped to further lift the Capitals over the Penguins as the period progressed and the Penguins communication struggles seemed to help the Capitals cause as well.

Washington created scoring chances by dumping the puck into the offensive zone and forcing second chances off of rebounds.  Niskanen, sent a slapper to the Penguins’ net, clipping his teammate Beagle on the way, sending Beagle off the ice.

After killing another penalty, Washington kept the pressure up, drew a penalty compliments of Pittsburgh’s David Perron, sending  the Penguins on their heels, with Caps’ Defenseman, Mike Green, playing almost the full two minutes. Once again, at 15:40, Robert Butuzzo gifted a power play to Washington by committing an Interference penalty.

With a backhand saucer pass from Backstrom, to Mike Green and on to Ovi, he notched a goal past Fleury at 17:19.

The third period began with a strong effort from Pittsburgh’s fourth line, but the Capitals’ defense steadily held play at their blue line. Washington’s loss the night before versus Columbus proved to be a motivator in the game against Pittsburgh.  Brooks Laich and Joel Ward showed strength in the offensive zone for the Capitals, running Pittsburgh’s Bortuzzo around his own zone.

Frustration and desperation seemed to set in for Pittsburgh, perhaps due to the number of players missing from the roster long-term, including Malkin, Pascal Dupuis and  Olli Maatta.  Washington continued to dominate on all areas of the ice, winning face-offs 34-21, besting puck battles and leading in number of shots 36-27.

The Capitals pushed the pace, taking the puck from their defensive zone, up and out hard and engaging in their forecheck.  Mike Johnston tried to change-up the lines to inject life into the lackluster Pittsburgh team, without result.

Five Pittsburgh penalties in the third period provided Washington with the platform they needed to solidify the win, including a bout between Steve Downie and Michael Laata at 10:41, followed by a 10 minute major on Downie for Abuse of the official.

Goals by Eric Fehr and Mike Green’s 2 on 1 tally rounded out a virtually flawless game by the newly helmed Washington Capitals team. A scrum ensued when Ovechkin overpowered Christian Ehrhoff, sending him flying to the ice, resulting in hooking and roughing penalties. 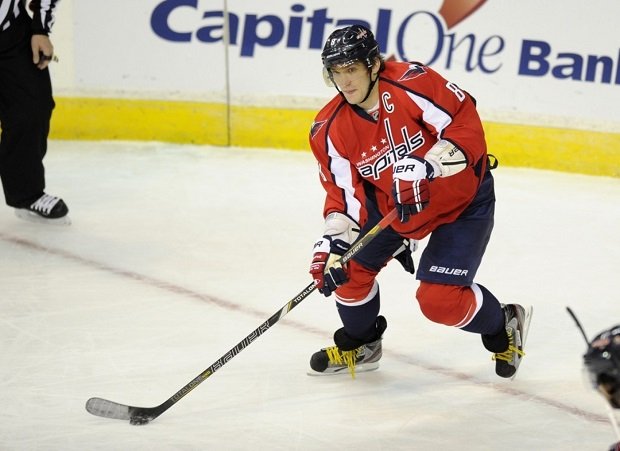