The final day of the KSM Classic from Sea Island in Georgia was upon us, and one man went into it clear favourite to win for the second time around this course.

Robert Streb, whose only other PGA Tour title came here six years ago, went into the final round with a three-shot lead over Zach Johnson and Bronson Burgoon, and four shots clear of Emiliano Grillo and five clear of Kevin Kisner, Kyle Stanley and Camilo Villegas, everyone’s wish for a win this week.

There were also a clutch of players six and seven shots behind too, but you felt that Streb would have to put in an uncharacteristic round of golf in his final eighteen compared to his first three rounds to give the rest of the field any chance of taking this title. He had gone 43 holes since his last bogey which came in Round One, so he was playing solid golf that’s for sure.

This is the final round of a golf tournament on the PGA Tour through and these are very hard to win as we know, so he would have to keep his cool and remain calm as no doubt the players behind him, some with much more experience at winning golf tournaments too, would try and come at him and put him under pressure to keep ahead.

By the time the leaders had teed off, Harris English, who began the day nine shots off the lead, had made up five of those in six holes and was right on the coattails of the leaders, well second and third at least, but it gave them something to think about as they teed up their first drive of the final round, with a host of players within two shots of the final group.

Streb saw his lead cut early on in his round after Johnson picked up a birdie and Austrian Bernd Wiesberger, here on a sponsors invite, put together a brilliant front nine to make up five shots to go into a tie with Johnson in the second spot, Streb had parred his opening six holes but knew there were plenty behind to pounce if he slipped up.

Cameron Tringale also made up five shots on the leader to go into a tie for second along with four other players as the number of players stacking up behind Streb grew and grew, so how would the leader deal with all of this pressure?

One of those players, Camilo Villegas, who had an average round yesterday, burst back into the tournament and halfway through his round had cut the lead to one behind Streb after a four-under front nine, could he pull off the first victory in six years on tour and put a big plus on what had been a difficult year personal wise for him and his family??

Streb though birdied seven, and then after Kisner had pulled within one of the lead, sunk a long birdie putt at nine to hit the turn two under par for his round and two shots clear, so at the halfway stage it was so far so good for the leader, but the back nine would sure provide some more drama perhaps.

Kisner, Tringale, English and Wiesberger were putting together some incredible rounds to put pressure on Streb, the leader had some breaks early in his back nine but scrambled well and took advantage of these breaks to remain bogey-free, the leader knew pars probably wouldn’t get it done if the ones below continued their birdie sprees.

Kisner looked to be Streb’s biggest threat though, but he overshot the green at 14 and needed a decent up and down to not drop a shot, whilst Streb then overshot the green at 13, so the top two were in difficult positions so the drama wasn’t done just yet.  If they both made bogeys, they could fall into the clutches of the chasing pack and make the end of this tournament very interesting.

Well, Kisner somehow made par whilst Streb bogeyed his hole, and suddenly with a few holes left they were tied at the top, and with English posting the clubhouse lead at sixteen under and two shots back after a wonderful 62, it was becoming more and more interesting, with a dozen players now with just three shots between them, it was building up to some crescendo.

Tringale, who briefly joined the leaders for a three-way tie, has never won a PGA Tour title before, but he was putting himself in the frame with quite a few others, although Kisner soon grabbed a one-shot lead after a birdie at fifteen, and with the leaders having three/four holes left, almost a dozen players were still in with a shot of winning!!! They would need the leaders to drop shots though.

Tringale would only par the final hole, setting the new clubhouse lead at eighteen under par after a super 62 in his final round too, one shot off the lead, and it ended up coming down to the Kisner and Streb battle to see who would take this title.  Kisner would shoot 63 in the end and be one shot clear of Streb with the latter having a birdie putt on 17 to tie the lead.

Streb made a superb putt and indeed birdied the 17th, and he knew a birdie down the last would see him win the tournament, whilst a par would mean a playoff between him and Kisner, superb drama!!!

A decent tee shot on eighteen gave him a good second shot in, and he sent in a decent second shot to give himself a fourteen footer back up the hill to win the tournament at the final hole, but he missed, meaning a play-off was indeed necessary to crown our winner of the RSM Classic.

Back to the eighteenth tee then, and Streb’s tee shot found the bunker, whilst Kisner found the fairway, Streb could only fire out to short of the green whilst Kisner left himself a makeable birdie putt.  Streb left himself an uphill putt for par, meaning Kisner could win if he made his putt, but he missed and Streb made his putt for a brilliant par save, meaning it was back to the eighteenth tee once again.

Both players found the rough with their tee shots but Kisner’s lie and the angle were a lot worse than Streb’s, and the latter’s second shot almost found the hole, meaning a kick-in birdie for Streb, and with Kisner overshooting the green by miles, he needed to hole out to keep the play-off going, which he could not do meaning Robert Streb did indeed grab his second PGA Tour title, his first since winning here six years ago.  Here is how the final leader board looked… 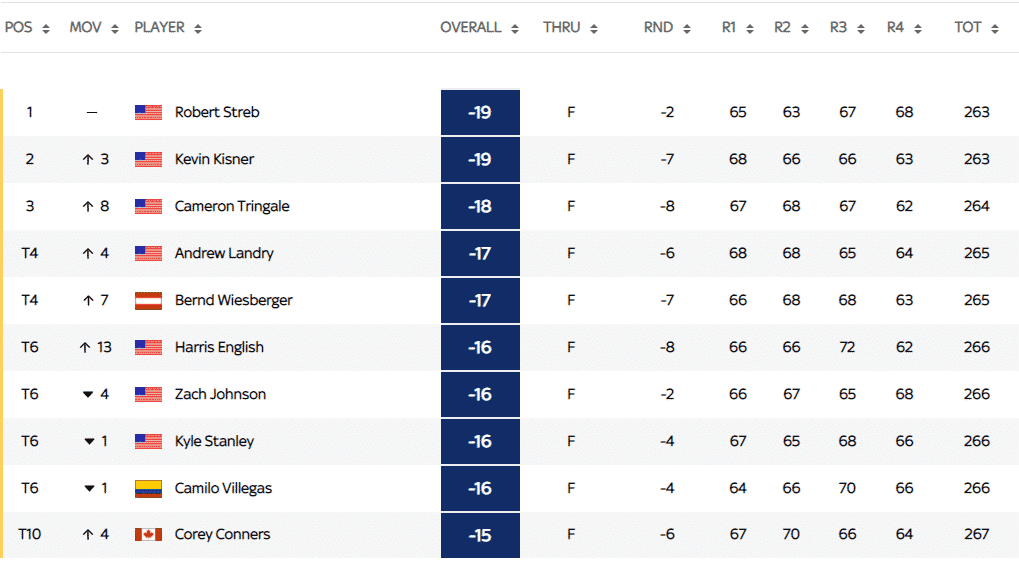 So many players shot brilliant rounds in the final round as conditions were at their best all week, shout out to top European Bernd Wiesberger who finished tied fourth after a brilliant week, he was only here on a sponsors invite as said before, so he took advantage of that!!!  And also to Camilo Villegas who was in contention for the first time in quite a while, it’s been a tough year for him and his family but he did them proud this week so well played sir.  Let us see what that has done to the top ten of the FedEx Cup standings…

Only two of the top ten were in action this week after most decided to take time off after the Masters, but both Stewart Cink and Jason Kokrak missed the cut so remain where they started the week, whilst this weeks winner Robert Streb jumped from 140th to 8th and into the top ten after claiming 500 FedEx cup points, it’s a game-changer for him!!!

The next event on the tour comes from the El Camaleon Golf Club in Playa del Carmen, Mexico, for the Mayakoba Golf Classic at the start of December. 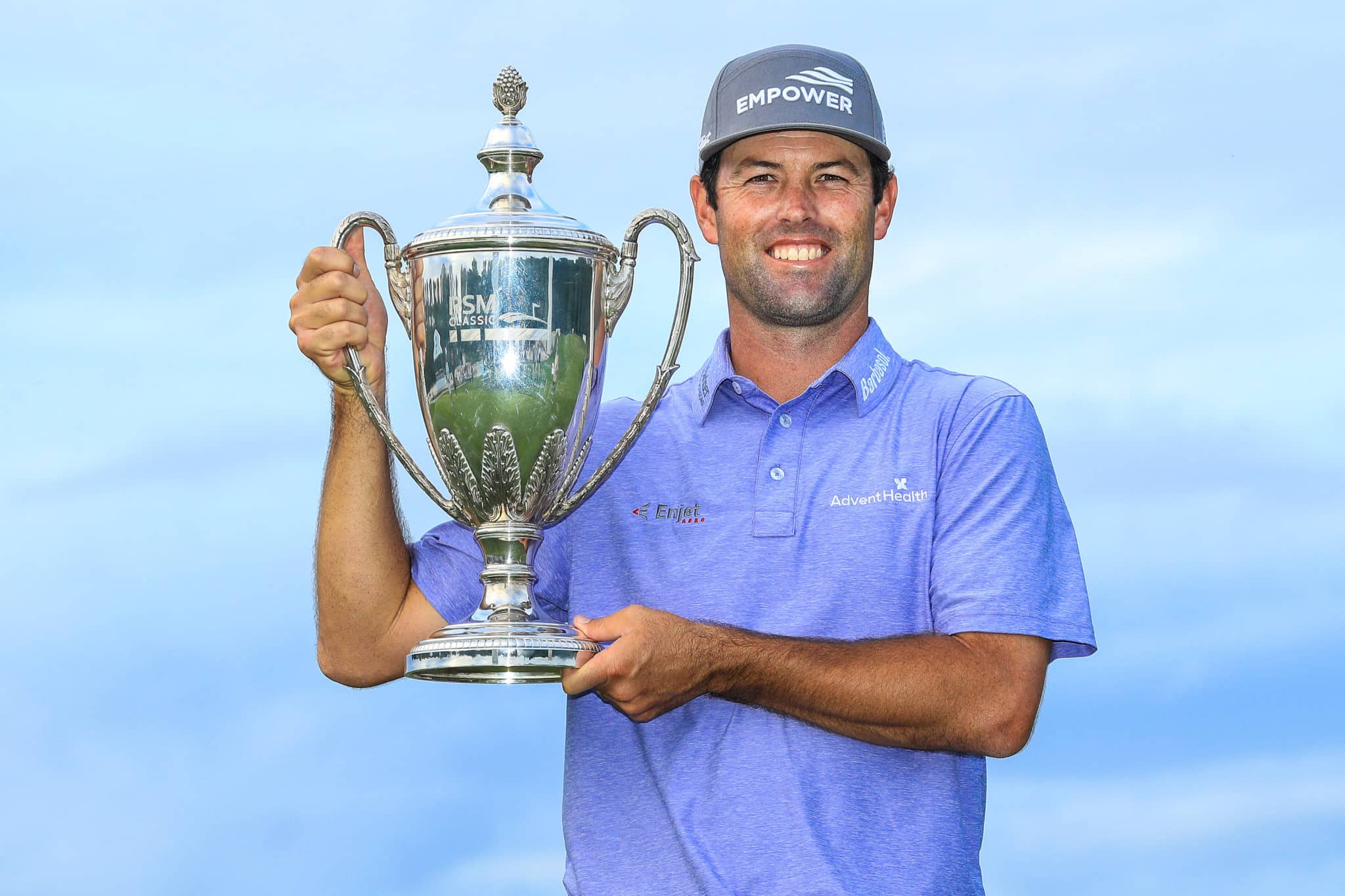