Here is a look back at Sunday’s Premier League Week Nine action, which started at Craven Cottage as struggling Fulham took on early-season highflyers Everton in the midday showing by the Thames…

Neither side came into this one with many forms, Fulham had only one win in six whilst Everton had lost their last three after a decent start to the season was now going south, and the hosts knew if they could heap more misery on the visitors by inflicting a fourth straight loss on them then they would put some daylight between themselves and the bottom three, but Everton knew a win would not only stop the rot but could get them back into the top five.

Well, it began very well for the visitors, netting after just 42 seconds as poor defending from the hosts gifted the ball to Richarlison and he drove down the left before crossing low and seeing an attempted clearance from Tosin Adarabioyo deflect in off Dom Calvert-Lewin, and it no doubt left Scott Parker, manager of the hosts, with his head in his hands.

But twelve minutes later he would have been a lot happier as Fulham found a leveller after Tom Cairney unlocked the visitor’s defence with a neat pass to Bobby Decordova-Reid who took it on to produce a neat finish, although Everton then thought they had gone back in front four minutes after that but saw Calvert-Lewin flagged offside, it had certainly been an electrifying start to this one.

However, after twenty-seven minutes they did retake the lead in what was a ridiculously open game as Calvert-Lewin grabbed his second of the game after Iwobi took out the entire left side with a mazy run before feeding Rodriquez who then fed Lucas Digne and his low cross was converted by Calvert-Lewin, and although VAR checked for offside, the goal stood.

It was a quality team goal it must be said.  And it got even better for The Toffees six minutes later when Digne found Abdoulaye Doucoure who had all the time in the world to head home, it was way too easy and you did feel for Fulham at this stage, this could get messy for the home side as Everton took a two-goal cushion into the break.

Midway through the second half, Fulham had the chance to reduce the arrears though when Ruben Loftus-Cheek was felled inside the box by Ben Godfey, but Ivan Cavaleiro missed from the spot, however, two minutes after that they did pull one back when the man who won that penalty, Loftus-Cheek,  saw a deflected effort off Yerry Mina find the net after a lovely move which saw Lookman weave his way down the right before picking out his teammate, and it set up an intriguing final twenty at The Cottage.

Suddenly it was the visitors who were holding on and having to dig in for the latter part of what had been a very entertaining contest, but hold on they did to end a three-game losing streak whilst Fulham continue to look nervously over their shoulders.  It was certainly an entertaining start to Sunday’s action…

It had been a tough start for the Blades, as after the highs of last season’s first season back in the big time they were finding this season very tough and had just one point from their eight games so far, the famous ‘second season syndrome’ perhaps.  They welcomed a Hammers side who can on their day beat the best in the division, and their recent form has been ok, but every West Ham fan knows that they can put in a shocker from time to time, so the hosts were certainly hoping for that.

The closest anyone came to an opener in a goalless first period saw McBurnie’s corner headed against the visitors upright by McGoldrick four minutes before the break, although VAR may have ended up ruling it out anyway as the latter was in an offside position, both sides had created chances but neither had a cutting edge in the opening forty-five.  Ten minutes into the second period though, The Hammers edged ahead as Sebastian Haller lashed a superb effort into the top corner from the edge of the box after the ball had broken to him following a challenge on teammate Pablo Fornals, and thereafter West Ham looked the likelier to add a second and came close when Declan Rice planted a header against the bar with just under twenty minutes remaining.

The Blades though continued to battle away, and they so nearly levelled from nowhere with fifteen minutes to go when McBurnie sent a rising shot against the bar after being sent into the box by new signing Brewster, but The Hammers saw the game out to pick up three points and move into the top half of the Premier League.

For Sheffield United it is another frustrating loss, no clean sheet in twelve league games now and only four goals scored in nine so far this term, it is obvious where their problems lie…

Leeds positive start to their first season back in the Premier League has seen them take a dose of reality lately and they sat 15th in the table at kick-off having lost three of their last four games, but they welcomed an Arsenal side who were only two points and two places above them in the table and had also lost three of their last four, so this one was a hard one to call. Leeds started brightly and their high press game forced Arsenal onto the back foot, and the more the half went on, Leeds grew more and more in confidence and it was they who were having the better of the game as the match reached the break, albeit still goalless.

Would Leeds rue those missed openings?  Leeds continued to dominate possession after the break, with the visitors looking short of ideas when attacking, and then came a moment of madness from Nicolas Pepe, who was given a straight red card six minutes into the second period after he moved his head towards Ezgjan Aliosk, leaving the Leeds man on the deck, this after a VAR check which saw the referee again use the pitchside monitor to make the decision, it was stupid from Pepe, and the Gunners had it all to do with most of the second half to go.

Leeds continued to pass up openings, including a Rodrigo effort that thumped against the bar, although Arsenal looked more organised since the red card, and with five minutes to go almost pinched it when Illan Meslier, who had not had much to do in the game, pulled off a crucial save from Bukayo Saka who had got through after a pass from Hector Bellerin.

Leeds then struck the woodwork again when Patrick Bamford planted a header against the post with three minutes remaining, and unbelievably they struck the upright four minutes into stoppage time when Raphinha smashed a shot against the frame of the goal and Arsenal survived to pick up a point.  It was one of those days for Leeds in front of goal, and they would have been disappointed not to bag all three points here that is for sure.

And so, to the final game on Sunday, and it had the potential to be a cracker, as fourth-placed Liverpool hosted third-placed Leicester City at Anfield…

Liverpool would go second on goal difference with a win whilst Leicester knew a win would see them end Week Nine of the season top of the pile. The Reds were unbeaten in their last four outings whilst The Foxes had won their last three, so this was certainly a match up between two quality sides who feel they have as much chance as any of picking up a league title.

There were plenty of touching tributes to ex-Liverpool keeper Ray Clemence at the ground, the man who won five league titles and three European Cups with the Reds between 1967 and 1981 died last week aged 72 and their was a period of applause prior to the game in his memory, could the hosts put on a show for him?

Well, twenty minutes in and the hosts grabbed the lead in what was a very unfortunate moment for Foxes defender Jonny Evans, as whilst trying to hold off Sadio Mane for a corner, he powers the ball into his own net with the back of his head for an extraordinary own goal. Liverpool thought they had a quick second when Diogo Jota found the net, but this was immediately ruled out for handball.

Harvey Barnes missed a massive chance for Leicester, but Liverpool was the better side no doubt, and they rubber-stamped that by doubling their lead four minutes before the break when Jota headed home an Andy Robertson cross. Jota becomes the first player in Liverpool history to score in each of his first four home top-flight league appearances for the club, wow.

It meant the hosts had a two-goal cushion after a dominant first period for the home side. Leicester looked a bit livelier the second period but the hosts still looked far more threatening in what had been a superb performance from the champions as the game reached the hour mark, and with twelve minutes left should have made it three but somehow didn’t after Roberto Firmino saw a shot smack back off the post back to him, see his next effort cleared off the line before Mane’s follow up deflected off Kasper Schmeichel and onto the woodwork again.

Firmino was to grab his goal though with four minutes to go when he shook off Cengiz Under to head home a James Milner cross and seal a decent evening for the home side.  They go level with leaders Spurs whilst Leicester miss the chance to go top after they were well beaten in this one.

Here is how the table looks after Sunday’s matchups… 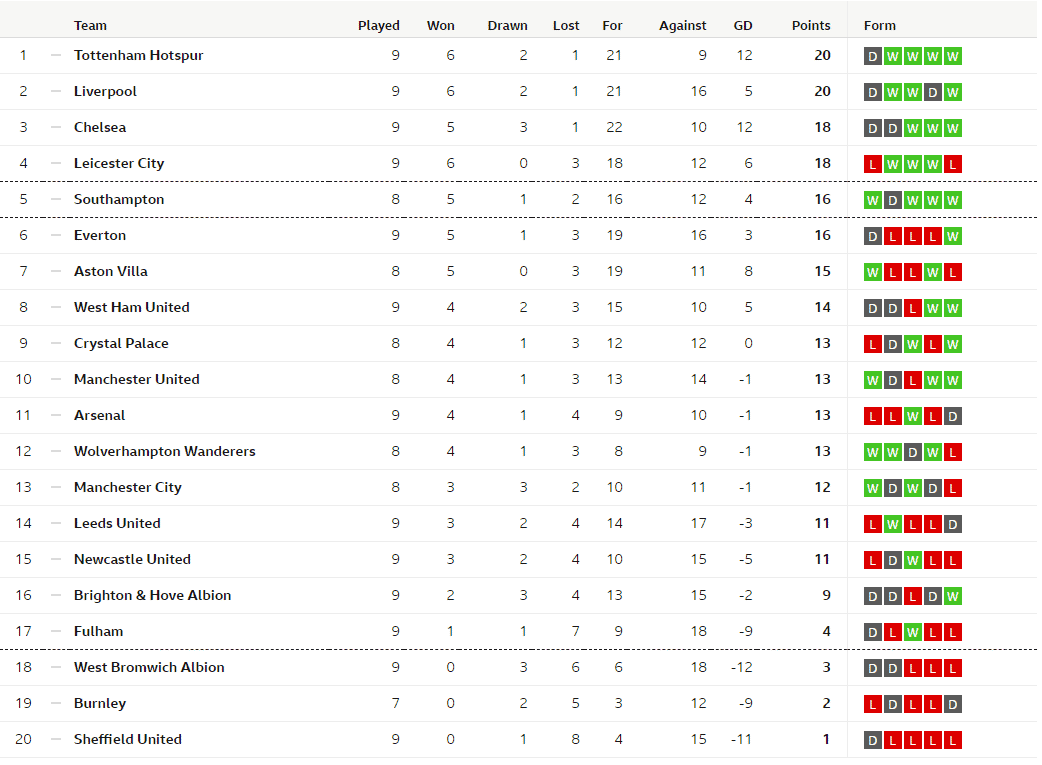 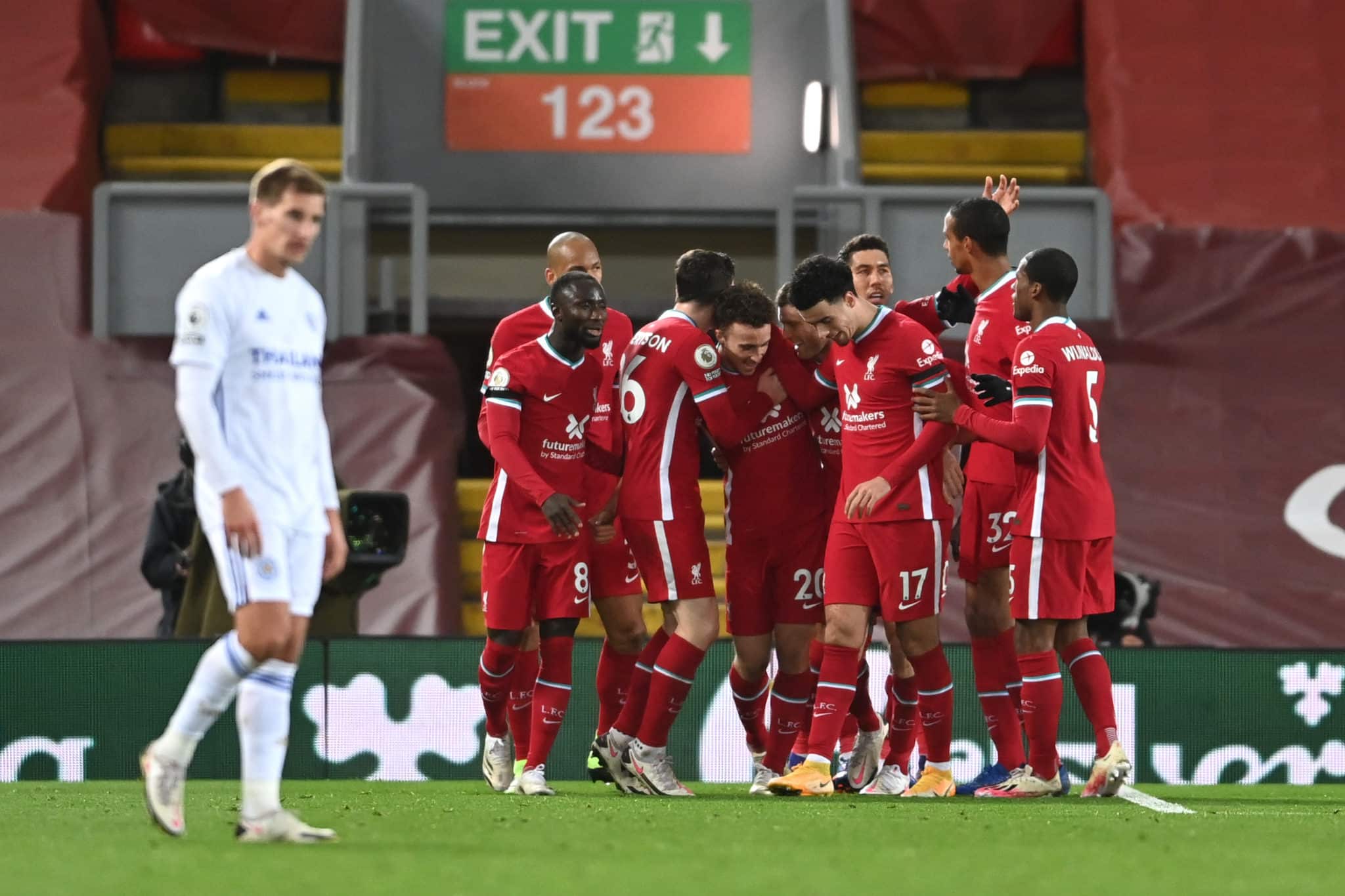