Dramatic decisions, painful punctures and clueless strategies, the Qatar Grand Prix brought all of these to us this Sunday as well as drama before the race had even started.

A lot of fans and teams expected the Qatar Grand Prix to be a boring one, with the track not being suited for Formula 1 and looked to be a circuit where we wouldn’t see many overtakes. Today we were all proved wrong.

I think one driver had conquered qualifying, bar Lewis Hamilton and his exceptional performance which saw him finish 5 tenths ahead of second, Pierre Gasly had stolen the show by finishing P4 in qualifying which was exceptional considering the car should be no-where near finishing on the second row.

In Q3 Gasly was going on his second qualifying lap where he had clipped the curb resulting in him having a puncture down the main straight. Confusion was caused with Yellow flags being brought out and taken away in which caused trouble to the drivers, the victims of the trouble would end up being Max Verstappen, Valtteri Bottas and Carlos Sainz.

Max Verstappen would end up getting a 5 place grid penalty as he didn’t reduce his speed as much as he should’ve during the double waved Yellows and Bottas would get a 3 place grid penalty seeing as he went through a single waved yellow rather than a double. This results in Max starting 7th, Bottas 5th and Pierre Gasly starting on the second row.

Both Red Bull’s had a tough challenge to face today, Perez’s poor performance in qualifying saw him start from 11th on the grid and with Verstappen’s penalty, he started 7th.

Verstappen had made his way up to 4th place off the first couple of corners and then with the help of DRS and raw speed he got up to second place by lap 5. Perez on the other hand had a slower start yet managed to pick off cars one by one which saw him get closer to the podium position.

Verstappen would then comfortably finish in second place with the fastest lap, due to the pace of the Mercedes and supposedly some wing damage for the Dutchmen he had no real chance of challenging for the win and second was the best for today.

Sergio Perez had a tough weekend with having to overtake so many cars due to start lower down the grid and then some interesting strategy calls from Red Bull in which Perez made it clear he wasn’t happy about. He was in a podium position but due to being called in again he only managed to claim 4th position, unfortunate not to get a podium but a solid job from the Mexican.

Hamilton now has got back to back wins and has reduced the deficit to Verstappen in the Drivers Championship. The gap between both drivers is now just 8 points! with 2 races to go. If Hamilton was to win the next race and get the fastest lap and Verstappen was to finish second, they would both be on 369.5 points going into the final race in Abu Dhabi.

Hamilton loves to win at new venues, in fact, he has won at 30/35 race tracks in his Formula 1 career and in addition to that ever since 2010 the pole sitter at a new venue has won the title. Hamilton took pole this week so could that potentially be a bit of hindsight for the Championship?

Fernando Alonso has shocked the entire F1 scene today with that podium. He originally had qualified P5 which was still insane and he was pushing the cars to levels they shouldn’t be at, as usual. He was then later on promoted to P3 on the grid due to the penalties and off the start, with an intense battle with Gasly he managed to get up to P2

Demonstrating his skills and talent Alonso looked to be holding out for the podium or P4 and with a controversial strategy from Red Bull Alonso made the most of it and stole the P3 in which he would finish.

Proving to everyone that the 1 stop strategy could work as well as proving all the doubters wrong when he re-entered the sport with the majority saying he wouldn’t be able to provide any good results and was too washed out.

Today Alonso made a statement to the doubters as well as making a statement for Alpine in the quest to finish 5th in the Constructors Championship which they now lead their competitors, AlphaTauri, by 25 points with 2 races to go.

Overall it was a fantastic race for the viewers and even if we don’t race at the same circuit the next time we are in Qatar hopefully the country could bring us a race like this one! What did you think of the Qatar Grand Prix? 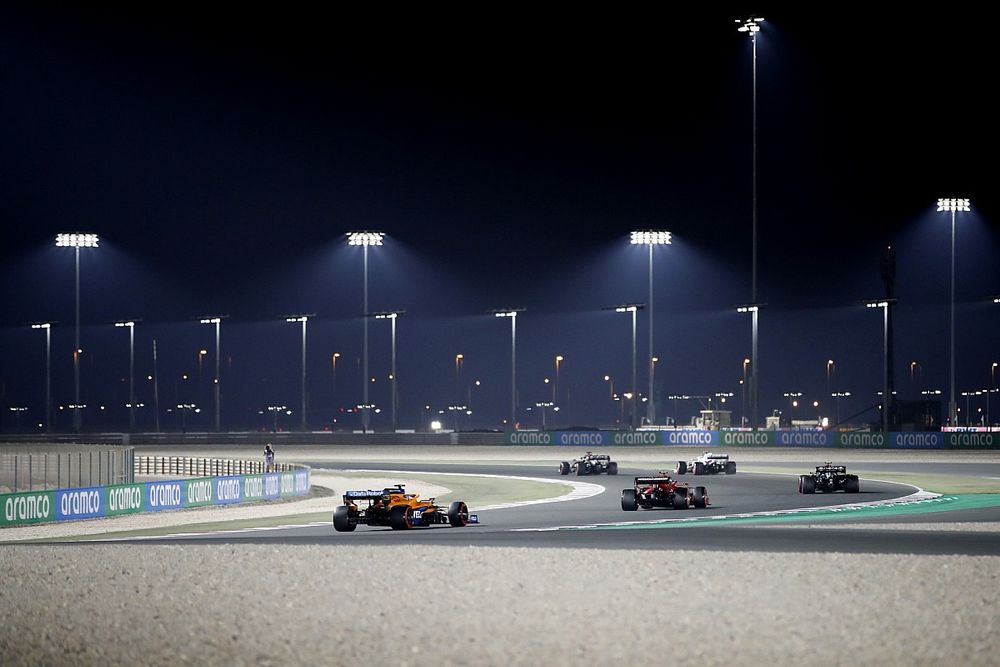