Red Wings lose, 3-2, to the Buffalo Sabres in overtime. A poor 3rd Period performance, another exposure of the miserable powerplay, and a missed opportunity for two points against the only team in the Atlantic with less points than the Wings.

The teams were evenly matched in the first period, going back and forth with chances to score. These chances included a great back pass from Frans Nielsen, who was going behind the net, to  a wide open Andreas Anthanasiou who rung it off the crossbar with an open net.

Neither team could beat the goalies until just over 10 minutes into the first period, when Frans Nielsen fired a wicked wrister under the glove of Buffalo goalie Anders Nilsson 12  seconds into a powerplay to give the Wings their first lead of the game. Buffalo couldn’t answer in the first period, and the Wings would take that 1-0 lead into the dressing room.

Neither team buried a goal in the second until 5 minutes into the period, when Petr Mrazek gave up a rebound on a Jack Eichel wrist shot that was slid into the net by Sam Reinhart. The goal was waved off on the ice because it appeared as if Reinhart had kicked the puck in, but after review it was found that the puck touched Reinhart’s stick after his foot, meaning that it should be a goal. The call was made, and the game was tied at one.

The period ended still tied, setting the stage for a rather dramatic (as well as poorly played) 3rd period.

Each team had a rather poor third period until about the last 8 minutes. Both teams seemed to pick up the pace of play and feel the intensity, realizing the chance to pick up two points.

Then, with 6:22 left in the period, Darren Helm, in his first game back from injury, fired a wrister past Nilsson for his 5th of the year and the 1 goal lead late for the Wings. This would have been a great storyline, Darren Helm coming back from injury and scoring the game-winning goal in the Red Wings 4th consecutive win.

But, with 4:09 left, Ryan O’ Reilly circled around in front of the net and fired a magnificent backhander over the shoulder of Petr Mrazek to tie the game at two. Neither team could get another in regulation, so a point was awarded to both teams and we headed to the second 3 on 3 overtime in as many games for the Wings.

With about three minutes left in overtime, Kyle Okposo took a 2 minute minor penalty for hooking on Thomas Vanek. This powerplay would be monumental for the Red Wings and felt like a powerplay that they had to end the game on. Unfortunately, the Red Wings were unable to convert, exposing the woes of the powerplay once again.

Flash forward a few minutes, Frans Nielsen takes a hooking penalty on RasmusRistolainen with a 1:07 to go, and unlike the Red Wings, the Sabres took advantage. After a QUESTIONABLE no hooking call on Kyle Okposo on the half-boards, he slid the puck past Petr Mrazek and into the back of the net to claim the extra point for the Sabres.

Sam Reinhart (#23) of the Buffalo Sabres collides with Riley Sheahan (#15) of the Detroit Red Wings during an NHL game at the KeyBank Center on January 20, 2017 in Buffalo, New York. (Photo by Bill Wippert/NHLI via Getty Images)

Now, I was planning on complaining about the refereeing and the blatant hook that should have been called on Okposo, but then I realized: the Red Wings did not deserve to get this win. Most of the third period was played very indifferently and the powerplay failed to convert in a golden opportunity in overtime. The Red Wings had all the opportunity in the world to win this game. This loss definently stung extra for Petr Mrazek, who played one of his most impressive games of the year, making multiple great saves and being the only reason why the Wings had a chance to blow opportunities in this game.

The Red Wings will have to come out in the next game against the Rangers on Sunday and show what their made of by coming back with a win. This, in my opinion, is probably the most important game of the year so far. The puck drops at 12:30 on NBC. 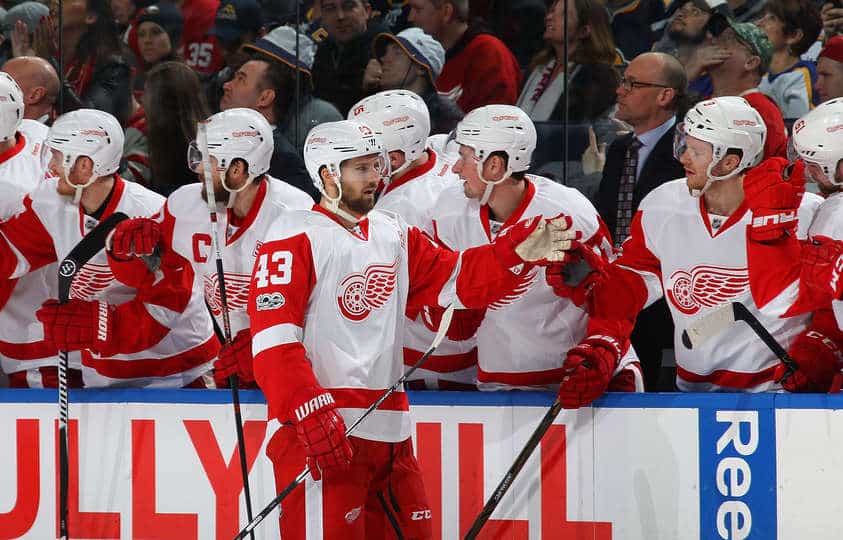