If you have ever played organized basketball, you know that point guard is the most important position on the floor. He is supposed to be an extension of the coach, directing traffic while finding ways to put his men in a position to score.

A great point guard needs to be one or two steps ahead of everyone else on the floor. He needs to know where his players will be before they do. He has to be able to see the entire floor and be able to react on the fly when the defense adjusts. Without a decent leading point guard, a team can be chaotic and disorganized, leading to sloppy play and turnovers.

The Phoenix Suns have been lucky enough to have great point guard play throughout the history of their franchise. In 1988, the Sun acquired Kevin Johnson in a trade from the Cleveland Cavaliers. He was an athletic freak who was at his best cutting to the basket. He played parts of eleven seasons for the Suns, retiring for good in 2000. He was a three-time All-Star selection, with career averages of 17.9 points per game and 9.1 assists per game, and helped lead the team to the 1993 NBA Finals.

In 1997, the Suns received future Hall of Fame guard Jason Kidd in a trade with the Dallas Mavericks. Kidd was a nightly triple-double threat and led the league in assists three times during his stay in the desert.

He was also a three-time All-Star and was considered the best point guard in the league. Due to a domestic violence case, the Suns decided to cut ties with Kidd in 2001 and traded him to the New Jersey Nets for another All-Star point guard, Stephon Marbury.

Marbury, while a talented player (19.3 PPG, 7.6 APG career averages), never found much success in the league. He often came across self-absorbed and could be a team distraction. The Suns ended a 14 year playoff streak in 2002, Marbury’s first with the team.

The Suns took a chance on Amar’e Stoudemire in the 2002 NBA Draft. He would make five All-Star appearances as a Sun.

Luckily for the Suns, they ended up hitting lottery gold with the selection of high schooler Amar’e Stoudemire. Selected ninth overall, Stoudemire was an unknown coming into the 2002 NBA Draft. He had moved around to five high schools throughout his prep career, raising a red flag in the eyes of many general managers. Coming off the year in which Kwame Brown was the Washington Wizards pick at number one overall, high schoolers were seen as a huge risk. Amar’e Stoudemire was not your everyday high school prospect, however. He had a mix of power, explosion and shooting touch that hadn’t been seen in the league yet.

Shawn Marion, another hybrid sitting on the Suns roster, was about the reach his potential around the same time that the team drafted Stoudemire. Marion, also selected ninth overall (1999 NBA Draft), was a lengthy forward with a toolbox full of skills. Nicknamed ‘The Matrix’ because of his crazy athleticism and versatility, he could do just about anything on the floor. He could play All-NBA defense at every position and could run the floor like an antelope. He was the perfect teammate on fast breaks thanks to his ability to finish.

Marbury, Stoudemire and Marion gave the Suns a strong nucleus moving forward. In 2003, the Suns made it back to the Playoffs against the San Antonio Spurs. The Suns were underdogs, an eighth seed going against the first seed, but they made it an entertaining series. The Spurs, eventual NBA Champions, ended up winning the series in six games but the Suns earned some respect from the fans and analysts. Marbury was named All-NBA 3rd Team and Amar’e Stoudemire would go on to win the Rookie of the Year, the first high schooler to do so.

The following year the Suns had high expectations but failed to deliver. The team started poorly and never recovered. Head Coach Frank Johnson and Stephon Marbury received the majority of the blame and both were shown the door half-way through the 2003-04 season. Marbury was sent to play for his hometown Knicks while Johnson was just sent home. It turned out to be a great move that would instantly turn the franchise around.

Mike D’Antoni was promoted from Assistant to Head Coach. After playing for years in Italy, D’Antoni had the experience of international coaching. He would bring his own version of that style of play to the NBA, instituting a run and gun, freestyling type of play call ‘Seven Seconds or Less’. The offense called for players to shoot the first open shot they came across and unselfish passing leading to easier looks at the basket. The offense was quick and players loved it. The second half of 2004, the team began to implement the style and it showed some potential.  Going into the offseason, D’Antoni and Suns management realized one thing was missing from the system… a point guard who could run it.

Steve Nash was initially drafted by the Suns out of Santa Clara in 1996 (16th overall). He was a scrawny Canadian kid from a small university. He wasn’t a hot prospect although he did flash some skills throughout his college career, showing great passing skills. After playing behind Jason Kidd for two years, he was traded to the Dallas Mavericks in 1998. Nash was given the opportunity he needed in Dallas, helping resurrect the lowly Mavericks into a playoff team. Even though he was a two-time All-Star and only 30 years old, Dallas Owner Mark Cuban thought he was past his prime and decided not to re-sign him to a maximum contract extension. Cuban was made to be a fool over the next 8 years that were to follow.

Nash returned to the team that drafted him in 2004, giving the Suns the floor general that they needed. The Phoenix came out of the gate screaming at the rest of the league. They became the most entertaining team over night while leading the league in wins. Nash was the conductor to a sweet symphony of fast breaks and three-point shooting. In addition to Stoudemire and Marion, the Suns had a rising star in guard Joe Johnson. Thanks to Steve Nash’s ability to find the open man, Johnson shot 48% from behind the three-point line.

The Suns finished with a 62-20 record, a 33 game improvement over the prior year. They led the league in scoring (110.4 points per game) but they were last in defense (103.3 points allowed per game). Stoudemire and Marion were named All-Stars while D’Antoni received Coach of the Year. In the most surprising Most Valuable Player vote in history, Steve Nash (15.5 PPG, 11.8 APG) won the award thanks to his immediate contribution and the team’s quick turnaround. They were the number one overall seed and easily advanced to Western Conference Finals, where they met up with the San Antonio Spurs once again. The Suns came up just short of the NBA Finals, losing to the defensive-minded Spurs in five games.

Although the Suns had made huge strides with their ‘Seven Second’ offense, the front office believed the team was a little too finesse based thanks to the series against the Spurs. The 2005 NBA Finals were a match-up between two squads based on defense and a grind it out style (San Antonio and the Detroit Pistons), something the Suns lacked. The team made the move of trading one of it’s best shooters, Quentin Richardson, to the Knicks for defensive center Kurt Thomas. Joe Johnson’s contract expired and management deemed his asking price too high. They executed a sign-and-trade with the Atlanta Hawks for multi-skilled big man Boris Diaw.

The Phoenix Suns were reloaded for the 2005-2006 and many were considering them favorites to win the NBA Championship. As luck would have it, Amar’e Stoudemire would tear his ACL three games into the season. The Suns were forced to rely on new acquisitions Thomas and Diaw to pick up the slack, as well as sixth man LeAndro ‘The Brazilian Blur’ Barbosa. The team was still managed to win 54 games, winning their division. Diaw (13.3 PPG, 6.9 RPG, 6.2 APG) was named the NBA’s Most Improved Player while Nash (18.8 PPG, 10.5 APG) claimed one more MVP. He became only the second point guard to win the award in consecutive seasons.

They returned to the Playoffs, this time as a second seed, and faced the tough Los Angeles Lakers in the first round. After falling in a 1-3 hole, the Suns scratched and clawed their way to win the series in seven games. They played their way back to the Western Conference Finals where Nash got to go head-to-head with the team that discarded him, the Dallas Mavericks. The Mavericks proved to be too much for the Suns in the end, as they lost in six games.

Over the next few years, that Suns core began to slowly be taken apart. In 2008, Mike D’Antoni decided to follow the money to New York, agreeing to coach the Knicks. Without Steve Nash, he was never able to re-create the success he enjoyed in Phoenix. Also in 2008, Shawn Marion was eventually traded to the Miami Heat in exchange for Shaquille O’Neal, a sign that the days of ‘Seven Seconds’ were gone for good. Amare Stoudemire began to pile up injuries and lost the explosion he once had. In 2010, he followed the same path D’Antonio took and signed a maximum contract with the Knicks.

Steve Nash had the best two years of his basketball life in 2005-06. He was the first point guard to win the MVP in consecutive years since Magic Johnson (1989-1990).

Steve Nash stayed loyal to the Suns until 2012, taking them to one more Western Conference Final in 2010. After years of seeing his best weapons shipped elsewhere, Nash made the move to sign with the Los Angeles Lakers as a free agent. He was hungry to win that elusive ring before he retired but so far it has been a mistake. The Lakers and Suns have went opposite ways since he switched sides.

For those two years that Steve Nash was MVP, the ‘Seven Seconds Or Less’ offense was nearly unstoppable. The Nash-D’Antonio tandem is one of those rare instances of a player and coach being made perfectly for one another. For two seasons, the Suns defied the odds. They won with an unorthodox style and little defense. Even though they came up short of making the NBA Finals, they will always have their spot in NBA history. Nash, for a moment, became the ultimate point guard. The skinny Canadian kid exceeded expectations, proving everyone that doubted him wrong. He became a point god. 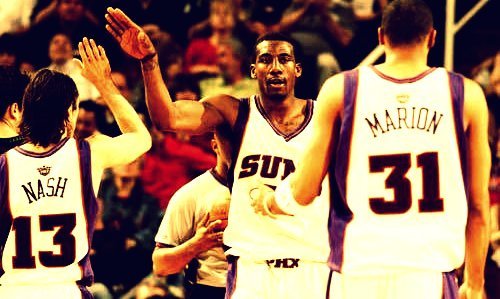