The 76ers have been the laughing stock of the NBA for the past couple years. Unlike the Cleveland Browns, who despite their best efforts can still not avoid ineptitude, the Philadelphia 76ers have intentionally been bad. Taking the concept of tanking to an all-new extreme, the 76ers have drafted near the top of every draft, but with mixed results.

Former GM Sam Hinkie, the ring-leader of the tanking movement until getting fired this offseason; made a few smart moves in his run. Trading Michael Carter-Williams when his stock was at its highest was a smart move, with Carter-Williams turning out to be a back-up point guard at best. In return, they got the Lakers protected pick, which will likely result in a lottery pick in this year’s draft. Picking Ben Simmons in this year’s draft was a great move for the franchise, finally being able to draft the best prospect.

Where Hinkie went wrong however was drafting talent without much consideration how those pieces would come together. Picking  Nerlens Noel, Jahlil Okafar, and Joel Embiid, all modern-day centers, is certainly a questionable choice. Even when understanding the concept of pick the best available player, it’s odd to still have each of the three present on team.

So far, each of the three prospects have performed with mixed results. Embiid looks like a borderline star player, making dynamic post moves and powerful blocks in his short time as a starter. He’s raw, but the fact he’s averaging 18 points and nearly 3 blocks in only 24 minutes a game is mind-blowing. Jahlil Okfaor has come out the gate with a polished offensive game, but he is still an awful defender.

Nerlens Noel seems like the odd man out. Despite only being 22 years old, it seems like most of the NBA has assessed Noel to be a strong defensive force but a limited offensive player. Without much of an outside shot, he can only play center in the modern NBA. Even with that being said, Noel is a much-desired trade piece, with many teams wanting that defensive anchor on their team.

McConnell and Stauskas, good friends on and off the court, have tried to establish a competent backcourt.

While each player has their own strengths, its still shocking that the 76ers organization has made little efforts to improve their backcourt. Cheap flyers on guys like Tj McConnell and Nik Stauskas have done little to solidify their team, although Stauskas has shown some potential as a scorer. What the team lacks most is a floor-manager, someone who will feed their bigs in the paint.

The goal is for that floor-manager to be Ben Simmons, who showed dynamic passing skills, especially for his 6′ 10″ height. As Giannis Antetokounmpo has shown, having a point guard with length can be a game-changer, allowing flexibility on the defensive end and an instant mismatch on offense. Whether Simmons is a good enough ball handler to be a point guard has yet to be seen, but experimenting is a sound idea.

Even if Simmons fills that role, this 76ers team would be best through addition from subtraction. Okafor and Noel have not mixed that well together, but its an experiment worth trying for a few more months before making a decision. Noel on the other hand could net a solid return, with the 76ers desperately needing more guards. Rumors of a Noel for Evan Turner trade are promising, with Turner giving the 76ers bench a solid ball-handler and scorer. Other options like Brandon Knight Rickey Rubio would also be solid additions.

New GM Bryan Colangelo has a lot of big decisions to make, but for the first time, this 76ers team has some promise. If the team is able to make a few good moves, they could be a viable playoff contender down the road. 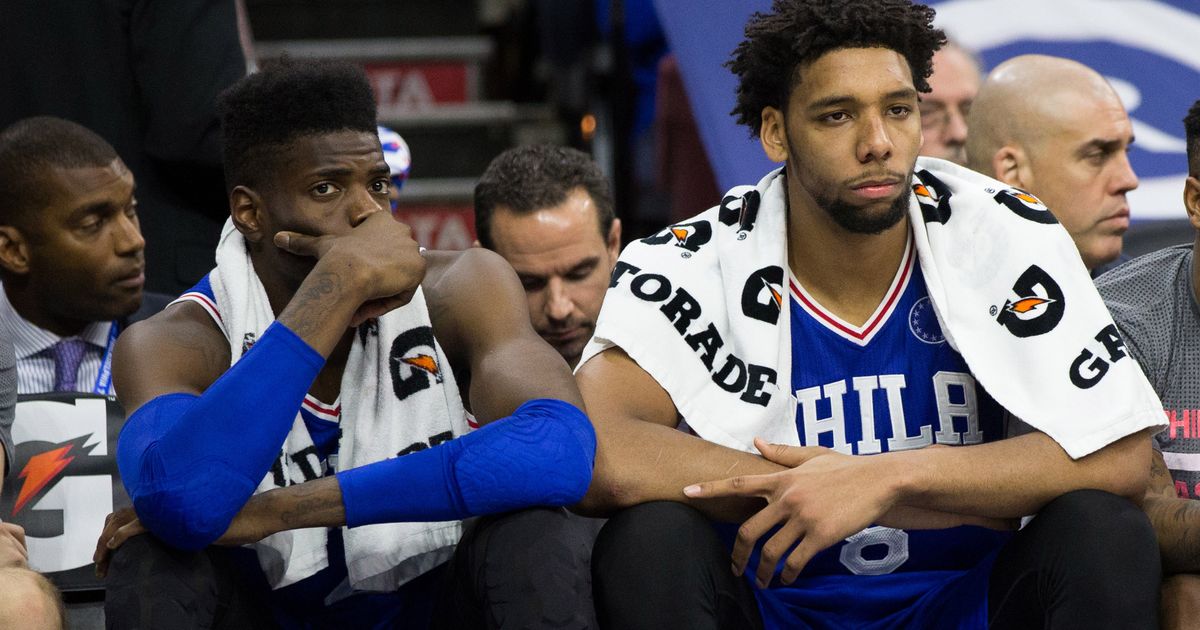